One of the arguments for raising the population limit is because the team games would have huge populations, the team tournament has had a good average time of around 30 minutes, I consider the 2v2 game ideal because its total population is 800 ; For this reason, I would like to vary the population limit according to the number of players (if the team games have not been extended, it is feasible to increase the limit of 200 population a little since some players produce more than 140 villagers, leaving only 60 available population. for army) 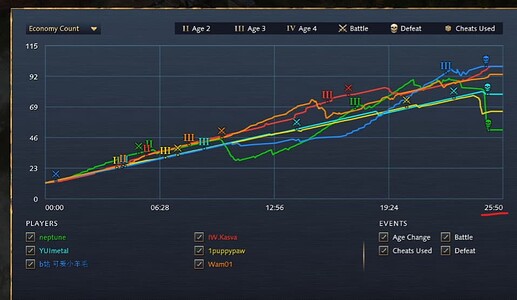 Note: it is still pending that the cost of the wonder would depend on the number of players

it is feasible to increase the limit of 200 population a little since some players produce more than 140 villagers, leaving only 60 available population. for army)

it is feasible to increase the limit of 200 population a little since some players produce more than 140 villagers, leaving only 60 available population. for army)

That’s what I wanted to hear, thanks, I’ll paste the link of this comment in my proposal to limit villagers

I am sure that 63% of villagers is enough to produce the remaining 37% of military units, I would like the games to be like this but I see matches that even exceed 150 villagers, which is 75% of the population!

PUP [imagen] If I was passionate about city management, I’d rather play “Manor Lords” but I came to ae4 for battles and war strategy, please give more importance to the army, for God’s sake! [imagen]

Sorry, I’m not a native of English, I was wrong: I meant that one of the reasons for NOT increasing the population is because it would increase the population of team games, hat’s why I made this proposal