If you have a villager who is luring / running away from a Wild Boar, and if you accidentally change his profession to something else (by right clicking a tree or sheep), the villager will stop and fight the boar to the death if the boar hits him. This is a longstanding bug all the way from the CD version of the game.

I had this issue just briefly mentioned in my list of unfixed bugs (without a real report), and an official developer asked if this was still happening.

So I decided to make a real bug report for this, as well as upload a recorded game of it happening.

Villager should keep running, because why would he fight back vs a Wild Boar, which he never has a chance of beating anyways. (and also a Wild Boar is never gonna attack a villager unless it is a Boar-luring situation, so why bother having the “defense” mechanism?) 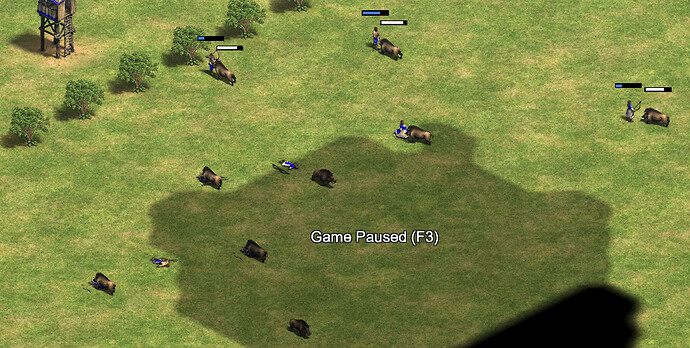 Here is a recorded games where i have a bunch of villagers lined up next to a bunch of boars. I tell each villager to hit a boar once, then I right click the villagers to a tree on the other side. The villagers fight back the boar instantly, and all die

That is the thing I am referring to, you accidentally right click a tree, and even if you try to correct it back, the villager will fight back regardless

As much as I hate this, let’s call it “feature”, I don’t think it’s a bug. It happens sometimes when you’re not careful, but once you’re aware of this you can sort this out.

Could it be connected to vils fighting back vs wolves (which is obviously useful)? Might be tough to fix one without hurting the other. Pretty low on the list of bugs in any case, pretty easily avoided.

That is the thing I am referring to, you accidentally right click a tree, and even if you try to correct it back, the villager will fight back regardless

Not the case for me, this would actually be a big problem.

I don’t think it’s a bug, in fact this behavior is from original vanilla version, on DE they changed this but with the latest changes it is back to what it was before.

this is definitely a bug, especially considering it doesnt happen if you dont click a resouce. like, whats the difference? why in the world should the behavior of the vils change?

this is not a bug, I am not sure why people want to remove villager fighting back. it has been this way since AOK.

you change this, next thign people will bring up is “my villager kept running and died without me knowing” etc. and soon we’ll have villager attempting to wall getting slaughtered by wild animals without fighting back.

if you misclick and villager fights back, then learn not to mis click. this is a game that rewards players with less mistake, those should NOT be removed and stay in game as it is intended.

@Harooooo1 while we do appreciate you compile list of bugs, when forcing mechanics of game assert it as a bug imo is too much, and some people are already crossing that line without realizing it. maybe it is better if you post under discussion first without asserting it as a bug, as changing this would affect all of competitive play and not just casual players.

but i “missclick” a complely unrelated thing, with no ability to fix said missclick.

if i missclick the vill to a straggler tree, and then “correct” the missclick by clicking on empty land, it will still fight back. no way for me to stop it except wait for it to happen.

and most importantly - in no situation ever do i want the vil to fight the boar back, so why in the world should this be an unavoidable automatic behavior???

I click the villager to do something. by no means ANYONE would EVER want it to fight a losing battle instead.

if i missclick the vill to a straggler tree, and then “correct” the missclick by clicking on empty land, it will still fight back. no way for me to stop it except wait for it to happen.

actually no it wont. if you click empty land it’ll simply run and not fight back. maybe by showing us a replay of this happening otherwise it feels like you’re making this up.

many of us have play the game every single day and if its only happening to you, chances are its your game.

Oh cool i didnt know that (I really thought i tried it, maybe i didnt or it was changed at some patch).

However, that was just a standalone argument in my comment, and I still stand by everything else that was said there. This is never a wanted feature, its inconsistent, and it has nothing to do with vils fighting wolves back.

However, that was just a standalone argument in my comment,

the standalone argument shows you can easily make mistake and make a comment without facts backing it up. though as much as I wish not to discredit your entire comment and future opinions, it is difficult to do so.

I do understand your opinion on villager fight back being an issue to you and other players who feel the same. imo that is more of an opinion, rather than calling it a bug, should put into discussion and ask if others would wish it to be changed. if you post it in bug thread, only people who dont like it will pay more attention to it.

this is not a bug, I am not sure why people want to remove villager fighting back. it has been this way since AOK.

As we already had the discussion on the bug list thread, whether this should be handled as a bug or not: @GMEvangelos was surprised this was still in the game. He was thinking this was fixed, as you can see in Harooos quote. They even “improved” (Aoe2 DE "Improved" Pathfinding - YouTube) the behaviour about it. So this leads us to the assumption this should be considered as a bug. maybe he (Evangelos) can tell us if this is a bug or a feature… would really be appreachiated

actually no, he mentioned as a different bug is what I read.

there is nothing to fix on this issue because it has been this way since 20 years ago with AOK. villager is suppose to turn around and fight predator animals when tasked to something else other than run/hunt animal.

implying theres something to fix, meaning it is different from all this time ontop of that it is not intended to be designed this way. 20 year old game, would have to ask original engine creator or dev to know.

actually no, he mentioned as a different bug is what I read.

What do you read? Is the text shown in the picture here (or on the original post) different for you than for everyone else? He is reffering with “is this still the case?..” to “vill stops when attacked by boar when…” how can you still mess this up with “boar randomly loosing aggro”, which is a completely different bug (and I guess there is no discussion on that one being a bug) but not brougth up in this whole discussion???

would have to ask original engine creator or dev to know.

Dev told us that he was thinking this is fixed… thats the reason why this thread exists, as even is mentioned in the bug report?

I tried to find it but its buried in another thread. If you can find it, check a few posts he is talking about another bug im fairly certain.

Then what do you think of the removal of foundation scouting? Legacy things aren’t automatically reasonable. Distinguishing behaviors against boar and wolf should be easy.

even if legacy things may not be reasonable, how can it suddenly becomes a bug when it doesn’t feel right to some and alright to others? who decides?

of course we need to set some sort of rule what constitute as a bug and I don’t see this brought up at all back in AOK days people simply accept as it is and play on. problem with people nowadays is if they dont like something they just call it a bug and force others to change with their opinion, rather than taking the time and effort to practice and not mis click.

not saying it applies to everyone but why would their opinion trumps others? the game literally hasn’t changed for 20 years on this boar pulling mechanics.