Hi everyone! Hope everyone is doing well!

As voted for by forummers, I present to you the Beautiful Screenshot Competition!

May I invite you all to participate in the opening round of this competition! For an idea of what screenshots would be like you can refer to this thread https://forums.ageofempires.com/t/poll-works-of-art-beautiful-scenario-designing/74303

Three great entries for this round of the competition! Voting opens today and will close on Friday, 25 September 2020!

Vote for your favourite screenshot!

Best of luck to everyone!

Some basic rules for the competition

Why aren’t any of the people who liked this post even contributing an entry for the competition? Jeezus.

Cuz I suck at making coherent scenery on the scenario editor.

I think, that this competition is good idea and I am waiting for beautiful screenshots, but I am not good enough at designing to participate.

Btw, why are you yourself not participating? You have posted some beautiful screenshots in these forums, you are definitely capable.

Wouldn’t be fair to participate in something I proposed a theme for myself I feel. But okay, at your suggestion I will consider an entry myself. Extending the deadline till end of the month. Hopefully some entries will come.

Cuz I suck at making coherent scenery on the scenario editor.

I looked for a bit of a guide on how to get started but information is all over the place and I haven’t had time to piece together all of the parts I might need. I am really interested in participating in this but I’m a long way from having the resources at hand to contribute.

I am not good enough at designing to participate.

my advice would be, it doesn’t matter the units names, but if they fit the scene use them

it doesn’t matter if your’re bad, everyone else has just admitted, we are of same elo here in terms of scenario design

sry, was taking a break, plus, i was making sure there was gonna be a competition, rise of a dynasty gives me so many ideas, ill be sure to make it soon, also, did u extend the deadline?

also, i don’t think that’s how you spell his name, these are one of those things people should be a bit more sensitive about

Yes, deadline is extended till end of this month. Hope some entries will come.

ok,
no offense but i think ill enter my once someone else enters as i don’t want to be the competitor

Thanjavur - Rise of the Chola Dynasty 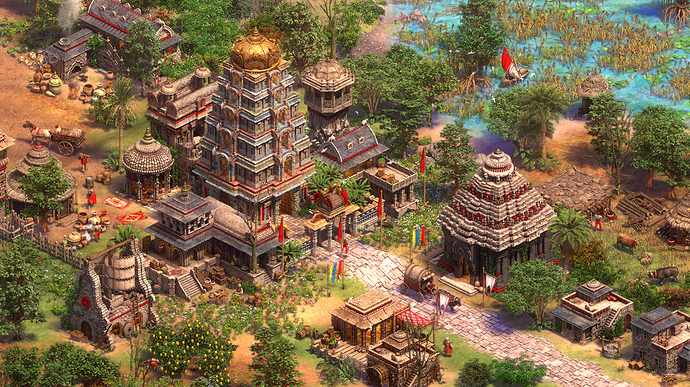 Thanjavur - Tha capital of the Imperial Cholas. There is a story behind the building of this temple city. The Rajarajeshwar temple at Thanjavur had the tallest shikhara among temples of its time. Constructing it was not easy because there were no cranes in those days and the 90 tonne stone for the top of the shikhara was too heavy to lift manually. So the architects built an inclined path to the top of the temple, placed boulder on rollers and rolled it all the way to the top. The path started more than 4km away so that it would not be too steep. This was dismantled after the temple was constructed. But the residents of the area remembered the experience of the construction of the temple for a long time. Even now a village near the temple is called Charupallam, the “Village of Incline”

Any entry? There is already one.

im gonna do it, hopefully there are more last minute entries like me, after all it is a competition not a rivalry (not saying i think i can win

)
also do the entries have to be historically accurate?

They should follow the theme for the competition. In this case.

"RISE OF A DYNASTY"

ill try to submit one by tomorrow

RISE OF THE MING DYNASTY

Great Ming , was the ruling dynasty of China from 1368 to 1644 following the collapse of the Mongol-led Yuan dynasty . The Ming dynasty was the last imperial dynasty of China ruled by Han Chinese. In this scenario the Ming emperor is visiting the temple of Heaven to pray for good harvest. The monk of the temple is welcoming him.
data mod : historical accuracy

It looks amazing! I hope you are enjoying my mod!

What is this mod? I am intrigued by the Pikemen/Halberdier particularly.

I’m probably going to try to participate in the next event, the theme for this one doesn’t inspire me much.
But the submissions are really cool

Apologies for the quality, i made a snapshot, before realizing it was not that fitting, so i quickly made this! i’ll probably post that on the other thread, but here is the turks riding through a sacked city!