Hi guys, I thought it would be nice to make a thread with beautiful scenario designs and maps, village/town scenes and the like. Modded stuff is fine too.

Let me start with this little Lithuanian village…

Are these converted AOE DE walls?

Indeed sir. Are you familiar with how to mod AOE:DE with the AGE Editor?

The stairs leading to the Daimyo’s honmaru (keep) in a wintry Okayama province, from my Haiku of the Ronin custom scenario: 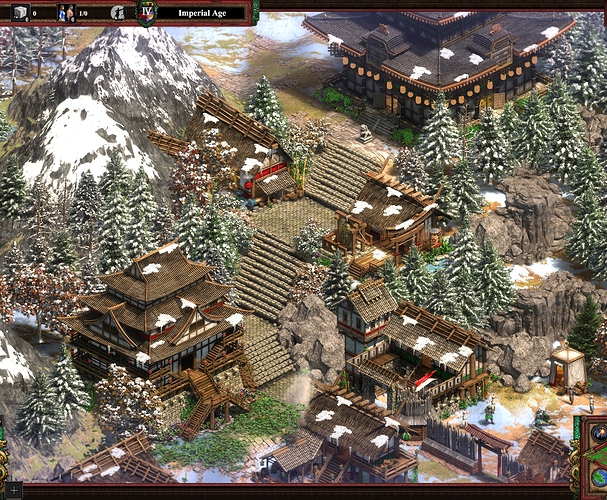 How did you make it?

I cannot take credit for the idea of the stairs. The original version of it was made by another community designer for a pretty town scenario called “Lights of Kurishima”. You can find it on AoK Heaven. I re-purposed his idea for my scenario.

The trick is done by very carefully placing bridges and elevations in AoK Trigger Studio, a third party app for the original and HD versions of the game, and then porting the scene over to a DE scenario.

@Juggernaut8704 Those custom cultural units look awesome! Is that your mod?

The only issue is that they don’t work at UHD resolution which many people use.

Is that your mod?

Yes it is one of my mods: https://www.ageofempires.com/mods/details/1732

This topic is my jam 8)
Hopefully I will finish my scenario today, otherwise most likely tommorow.
Worked on it quite a long time, reason is mostly because of triggers consuming a lot of time for testing (and finding workaround if they don’t work).

Wait, I thought that trigger studio wasn’t working for Age of empires 2 DE?
Or was this recently updated?

It does not, but you can edit a legacy (original game or HD version) scenario in Trigger Studio then port it over to DE just by opening the scenario in the DE editor and Save As (it will switch to the new game). At that point, you will not be able to open it in Trigger Studio again, unfortunately.

Sounds like quite a mess still, I’ll have a look if I can work with it, since I am also new with trigger studio itself.

A little inspired by my work in the last scenario of the Bayinnaung campaign?