The long awaited “Advanced Idle pointer” has been release just a few minutes ago:
https://www.ageofempires.com/mods/details/2589

For those who which to install it offline i invite you to visit my blog post: https://ageofnotes.com/tutorials/advanced-idle-pointer-is-out-for-aoe2-definitive-edition-offline-installer/

Nice one, thanks! One of the best mods.

I mean, no offense, but why not just using the hotkey instead of a whole mod?

The charm of this mod is in mid/late games when you got idle vils everywhere and most of the times you miss them. Yet in dark and feudal age the exclamation mark will save you big time especially if you left a villager walling and forgot about him (vils behind buildings are hidden). Distractions happen the whole game and without this mod you’ll be idling a lot without knowing.

You’ll probably like this in Age IV, then. “Zzz”’'s seen over idle villager: 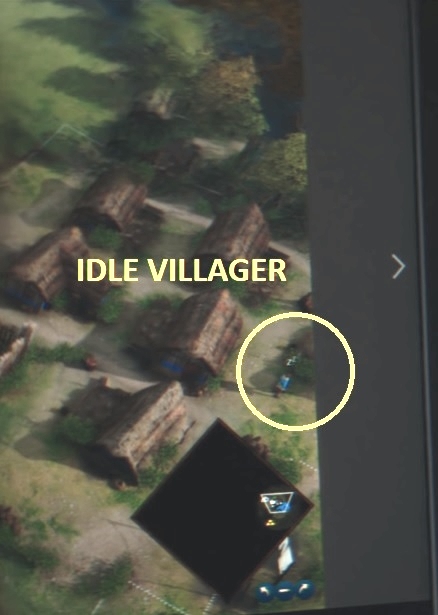 As described in this thread in the post from 16 days ago:

It’s kind of late to post this now maybe, but there are some things that i also got watching the trailers and forgot to put on the table. Better to be late than never they say, so let’s go into it. We all saw the farms and mills spreading over there, but what about wood resource recolection? here is what i got: RESOURCES We can see some trees felled near the walls outside the base [ARBOLES] And here some Mongols villagers chopping a tree and collecting it like in the old ways of Age 2 (numb…

I don’t particularly desire this feature, as I should learn from my mistakes and be more aware, and use the period (.) hotkey more often

Main reason, sometimes you are really busy and are not constantly checking for idles, so catching a lazy guy on the fly is always an improvement. Sometimes you also expect everyone is working because you tasked them to do so but 3-4 sec later you see that guy chilling behind a TC pole even though he should have been going to wood. Better to catch him right away.

Now the real reason though, you see the idles of your allies & enemies. So you can point your allies that they have idle vills. Even better is that you see your enemies idle villagers and see all the chaos you produce.

Even better is that you see your enemies idle villagers

Thanks for the explanation, these reasons make sense now…

So this is a bizarre situation. I had people request an idle villager pointer mod throughout December, including Greg. I told them I would release it once I had export support ready with my tool (SLX Studio). I guess Greg got a bit impatient and attempted to release his own (“Advanced Idle Pointer” mod) using Openage, but it had broken player colors and only supported x1 size. I had already started on my version of the mod (“Idle Villager Pointer”) and released it a day or two later with my own pointer graphic, working player colors, and support for both x1 and x2 sizes. Greg thanked me and linked to my mod page from his, but then about a week later, he just ripped the files from my mod and updated his mod with all the exact same files. So that’s pretty shady and I hope Greg has an explanation for that.

Greg, even if you thank me and link to my mod page, I don’t think it’s right to essentially steal my work and republish it as yours without permission. If you’re not going to do your own take on the mod, which there’s really not much you could do differently with such a simple concept, then you should just delete yours.

I have linked to your original mod page and updated my mod with your version files at the same day. My intention was to provide access to better quality advanced idle villager (your version) to as many users as possible while I make my own.

I was intending to make my own that very day you released SLX studio but your software was not exporting smx files properly remember? Because later that week and still I have had some work to deal with.

I didn’t do anything shady brother I am still planning to release mine and I must say… If someone is stealing that person would be you because you stole the concept at the first place from Dedpool (original author) and Gallas (inspirational man). At least I credited them when my mod had broken colors. Did you credit them at all?

Even though you hijacked the mod concept itself without any permission from the original author I am not judging you for that. But no worries I am making mine soon.

What the… this is ridiculous. You literally requested me to make the mod, dude. I think you are putting a little too much emphasis regarding credit over a concept. I didn’t rip anyone elses work and republish. My mod was all my own work, even the exclamation mark. If someone asks for a hippo mod and I make one, I don’t see why I should give credit to that person or even to some person who made one before me if it’s not the same assets. I don’t see why you can’t understand that what you did was basically theft.

Also, I don’t know who those people you cited even are. All I was doing is fullfilling popular requests and you’re trying to spin it around and accuse me of something.

Nobody requested you anything you volunteered to steal the idea and only ironically karma has its ways to pay you back.

You stated that you didn’t know those people I referenced? Why lying our faces? This is a screen of your comment:

You already made up your mind not to give a ■■■■ about the orginal authors so why should I respect you now and remove your mod files from mine? (well at least when i make mine)

Why did you have to do this to yourself? I have credited you and linked to your mod and stated that I am using yours temporarily. You are making both of us look bad after all.

I’m not lying. I’m really not familiar with those people. I never had that mod installed on HD. I’m only aware that it existed. People requested that I make the mod, including yourself, so I made one. I’m just trying to help out with the community and its unbelievable that you’re trying to accuse me of any wrong doing. Even you were greatful of my efforts up until you got caught lifting my work. This is so bizarre.

I mean, I could quote you for all the times you thanked me for my efforts. I don’t see how anyone could argue that I’ve not helped out the community, especially with development of SLX Studio. Something I did for free and in my free time. You are being ridiculous. You ripped files straight from my mod, uploaded it as your own, got caught, and because it made you look bad you are now trying to sully me. It’s just pathetic. Don’t bother with another reply. I’m moving on.

You did help the community a lot with SLX studio and Thank you a million for that. I am not a toxic person it just hurts that you throw such accusation that I stole without mentioning you.

If you would have approached me with politeness and appealed nicely I would have 100% removed your mod files and revert back to my bad color mod files but you did approach me aggressively accusing me of theft and shadiness. I would have even linked to your mod in this thread if you requested nicely.

Greg thanked me and linked to my mod page from his, but then about a week later, he just ripped the files from my mod

I am still planning to make my own using your tool so I dont understand why you’re acting like this. Anyways no harm no foul for I still forgive you brother. We’re all helping the community in every way we can and no one is making money out of this mod. I just hope you come to your sense and become a nicer person again and not let emotion take over.

No, I’m saying you stole with mentioning me. At the end of the day, it’s still theft. You never asked or even told me you were going to reupload my files. Like I said before, just because you thank me and link to my mod page, I don’t think it’s right to steal my work and republish it as yours, even temporarily. From your argument, I guess you’d be okay with anyone reuploading your work as their own (even from the same site), so long as they thank you and link to your page. That’s something I would expect from some random person on Steam workshop, not someone of the community, which is why I find this so bizarre that you did that.

I guess I got the date wrong, since you’re saying you did it the same day I uploaded my mod and not a week later (I assumed it was the last edit date), but still, that’s even worse? You’ve “temporarily” stole my work for 22 days now (and counting?). As to your claim about export SMX being broken; firstly, when you informed me of your issue I told you how to easily work around it, and secondly, I reuploaded the app with a fix for that like 15 minutes later and you know that. Again, you thanked me for it and that was even two weeks ago. You’re acting like you’ve been unable to do anything since and that’s just not the case. Really, for all I know, you were just going to leave your mod as it is since there’s nothing really to do differently.

Look, I wasn’t even angry, and coming into this thread I even thought this could have possibly all been some misunderstanding. I gave you the opportunity here to explain yourself, but you immediately went on the offensive and chose to accuse me of stealing the idea and started grasping at straws in an attempt to try to make me look bad. That annoys me, especially since you are one of the people who asked me to do the mod. Looking back, given your immediate accusations against me for stealing the idea, it looks like what you really just wanted was to be first with the best version of the mod, gain more likes/downloads, and you wanted to take credit for yourself and your friends. Well, if that’s the case, you got what you wished for. I think if you want to save face, you should remove my files from your mod and apologize. But you do what you’re going to do and I’m going to move on from this.