I am from India , and for some reason 90% of the games I play are on Brazilsouth server which is the worst possible server for me (350+ ping)
It happens in both situations when I am playing South Americans / North Americans which gives them a huge advantage as they have significantly low ping to this server and sometimes even when I am playing Chinese or Australian or even Europeans it is played on Brazil server.
It makes my 1v1 and team game experience really bad , I often drop or get disconnected from this server or my friends do, so I am forced to play in the unranked lobby.
Can you fix the server allocation system to avoid servers which are laggy to certain locations , or you can allow people to ban certain servers.
I have got this feedback from all my fellow South Asian friends and even Australians.

ISSUE Why are so many team games played at the Brasil server, even if no one is from that region? Almost all of these games are laggy. I think there is something wrong with the algorithm to determine on which server a team game is played, which result in Brasil in too many cases. Many games with just player from the EU are played on Brasil server fo…

Something seems wrong with the algorithm behind picking a server in team games. In the end Brasil is picked to much for some reason.

It happens to me in 1v1s as well

From California here, also noticed that all my 4v4 Random Team Ranked games were on the Brazil server. Speed was decent on all of these games so far. Just another data point.

The Brazil server is indeed selected an awful lot. I looked up the nationality of those I played with and against on AoE2.net, and in most cases, only one players is from South America or no one at all. Even if one is from South America, it does not make sense to force multiple players into a transoceanic connection only to have one player benefit from a local server.

Im from Argentina with the same or even better than average internet speed than most of us. I have 56 ping to Brazil then it jumps to a still decent 170 ping to EastUs then 230-250 to all the european ones. Then >350 to the asian ones. So EastUs would be the other option most of us can play with less than 200 ping, what are your pings from where you are?

Happens with me too in 1 v1. servidor sangrento!!

Im from Argentina with the same or even better than average internet speed than most of us. I have 56 ping to Brazil then it jumps to a still decent 170 ping to EastUs then 230-250 to all the european ones. Then >350 to the asian ones. So EastUs would be the other option most of us can play with less than 200 ping, what are your pings from where you are? 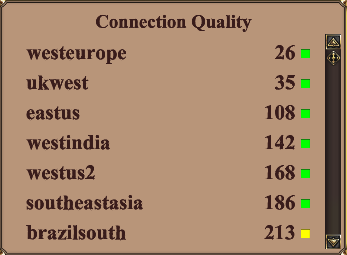 I’m from Argentina and I have seen some North Americans, french, chinese and japanese players when playing ranked, if that helps.

Same here. Was wondering why every game had terrible input delay. Checked ping and every game has 200+ ping. Only australian/korean/brazil servers have that high ping and its unacceptable. FPS issues are also terrible due to other players in teamgames playing with potato PCs who should not me allowed to queue.
Im from europe.

this is unacceptable, after 2 months playing in this server brings a lot of DC.

remove it if you can’t fix it

the game is unstable in general, give devs some patience after a big new patch

Why should wehave patience? Every patch is bugged worse and worse. Malay bug, then freezing screen, then stuttering and freezing screens. And they took 2 months foe this patch.

No, man. Game is more than 8 month olds
It should be perfectly payable by now

Argentina, Brazil and Chile are 4th, 9th and 16th (respectively) in the list of top number of active players by country. Why would you remove the best server for all of those people?

But if something is wrong they should fix it of course.

Btw how do I check in which server I am playing?

Btw how do I check in which server I am playing?

because is a bad server that Microsof either can’t fix, or don’t want to fix.

They still can play in the US server at good ping.

the fix with the Brazil server is easy. just remove it. the devs had 2 months to fix this DC. there is no more patience. I was expecting this patch would solve something.

I was silent and patient since the May patch, where this problem started. I even was patient with the April patch and the cheat fest it was.

There is nothing wrong with the Brasil server. What is wrong is the way servers are picked. For some reason Brasil is picked way to much. 4v4 with only players out of Europe and Asia? Lets play on the Brasil server. Why? Just why? That is main issue at this moment. And this results in all the lag in team games.

And added to that already existing lag, we also have something wrong in the latest patch, so we can extra lag.

Since patch a few days ago, ALL of my matches are on brazil for no solid reason whatsoever. When asking nobody says hes from SA. Unplayable matches; going to test a few games everyday and i will insta leave every brazil match until this is fixed.