This is a very nasty bug, because it gives no error message about overwriting not happening, which means that player may lose a lot of progress.

Just to confirm: this issue DOES NOT happen if you overwrite a save file twice within the same campaign mission? It sounds like there may be cases where a file will not be overwritten even when saved within the same mission, so I want to verify the circumstances when this happens in order to better understand the issue.

I have not played much recently, so I can’t confirm, whether overwriting saved games within same campaign scenario always works. I did some testing moment ago and managed to succesfully overwrite and load same savegame multiple times in first Barbarossa scenario. I even restarted whole application and still managed to load and overwrite succesfully.

When playing the Vikings campaign from the historical campaigns menu, at one point the game crashed to desktop (with no error message) during a fight, but I thought it wouldn’t matter too much since I had the game saved around half a minute earlier. But I soon realized that the game didn’t overwrite all those saves that I had done, so I had to start again from a save that was created around 30 minutes earlier than the crash (specifically, it did say that the last time it was saved was at 3:11, but I saved it numerous times after that the last being at around 3:43, but the game did not overwrite the save file and it didn’t say anything about that either, it seemed as if it was succesful, but it wasn’t).
So I tried deleting the save file and creating a new one with the exact same name. But then another bug appeared since the new save file with the same name as the previous one didn’t appear on the saved games menu anymore. A restart fixed this, but in the end I had lost 30+ mins of progress.

Not sure if this can be reproduced, but I ran the game from Steam so maybe it’s possible that it wasn’t launched with administrator privilages? But that probably isn’t the case because overwriting other save files worked fine, it’s that specific one that didn’t work.

Hey there @HWL8409! Thank you for the report! A few questions / asks that you might be able to provide for our team:

Let me know if any of these apply to you and I’ll pass the information along to the team. (Bonus points if you can capture a video showing the issue in action.)

Hello! About the questions:

Let me know if you need any more information. And keep up the good work!

When you try to save a game and the save file has the same name of a file that already exists and you overwrite it, the saving does not occur (even though you have confirmed it) and the save file is not “updated”.
Example: 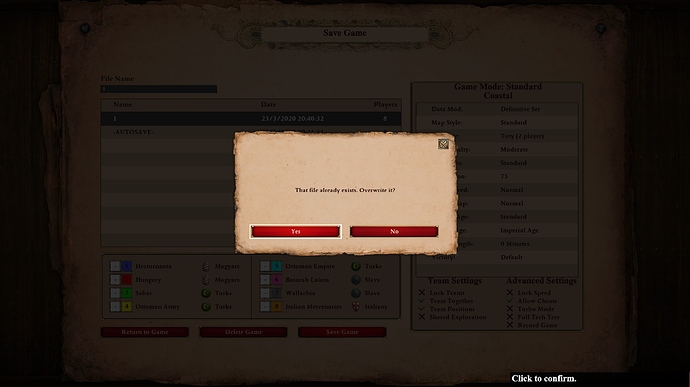 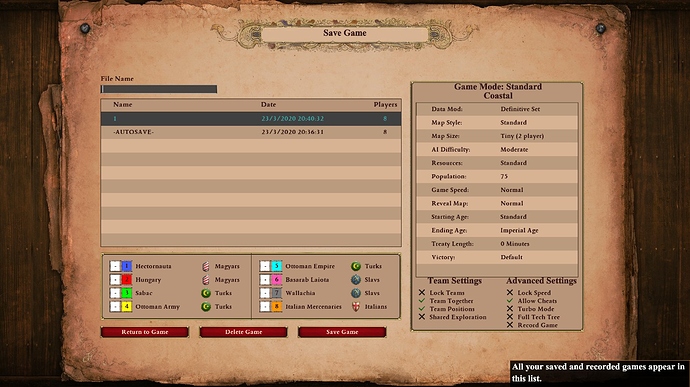 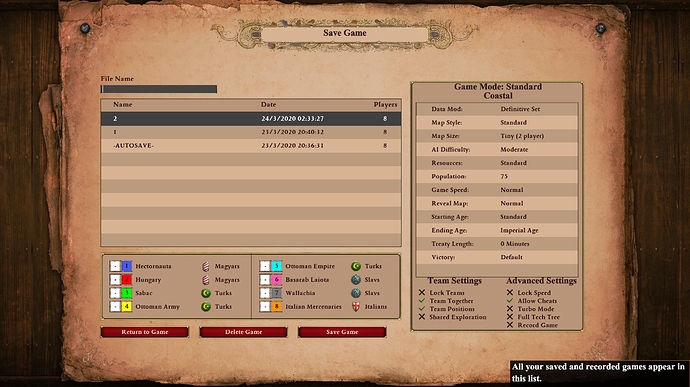 It’s a little bothersome but it’s a bug in the end. Thank you guys keep up the good work!

Hello friends! I’m afraid that our Test team is unable to reproduce the problem with all of the steps provided in this thread. There are a few things that might help us continue digging into this problem:

Let me know what you are seeing and I will keep this ball rolling. Thanks for the report and for letting us know what’s happening!

Hi. I was capturing the screen and tried to reproduce this issue again to upload it but this time the game correctly saved and overwrited the savegame. That was fine I guess?

Hello! I’ve been having this issue. Save games will occasionally not overwrite.

Version 101.101.36202.0 4819260
Steam
Windows 10
I have Steam Cloud saves enabled
I have verified the integrity of my game files before taking this video.
I can reproduce it pretty easily. Save a game. The following day play a game and attempt to overwrite the same save file. Opening and closing the game on the same day or overwriting during the same session both seem to work fine.

I have a video of it happening. What would be the best way to share it?

*edit: I just uploaded it to youtube for now https://youtu.be/O8PRxALME7k

Hmm, interesting. I tried to overwrite savegame from the past (months ago) and it worked succesfully.

Yes! Thank you for capturing and uploading this! A few questions:

Thanks again for passing this my way! =)

No, I didn’t even have an xbox live account until a few days ago.

Here is the save game file

Excellent. Thank you! I’ve passed it along to the team so they can take a look.

Are you / have you ever logged into Xbox Live? Does the behavior change IF you are logged in vs. if you are not? (@Yorok0: feel free to add your commentary, as well!)

I am usually logged in to xbx live. I now logged out of xbox live and overwrited savegame from yesterday. It worked succesfully.

A post was split to a new topic: [Issue] Save Game list does not display save files

when i save on an existing savegame, it doesn’t saves the game, just renews the timestamp

Hey everybody! Since @FeedAardvark824 is still seeing this issue as of the latest update (36906), I’d like to circle around with a few more questions (include those listed above for those now encountering the issue):

Anything you provide will help us narrow down the issue, so please let us know what you find!

Thanks, again, for the reports!

Weird. Seems, that overwriting campaign savegame in campaign makes it possible to overwrite that savegame in standard game in same day.

I was logged into xbox live during this whole time. I am not using Steam cloud saves. Savegame folder is not locked or read-only.