First the Swedes, then the Incas, and now the Japanese please

Good afternoon, fellow players, first of all, I tell you that I am part of the Hispanic community and my English is not very good, so sorry for any grammatical flaws.

Today I come to you with the following question that revolves around the Japanese, I have been playing since approximately 2013, and this controversy has always existed, and the truth is that there is no other civilization that deserves a greater nerf. From my point of view, there are 3 big problems with this civilization, the sanctuaries, the ashigarus and the double sent of the metropolis, this is too OP.

My proposal with the sanctuaries is very simple, that the animals that are in them can be hunted and scared by the settlers, it seems something very simple but it would be really useful, it is really very annoying to lose livestock because of the sanctuaries and that only They can be recovered by taking down the shrine, if the animals could be hunted and scared away from the shrine by the colonists’ shot, it would be a very useful way to neutralize the shrines and would force the Japanese player to place them on their side of the map. Another possible nerf would be to remove the Japanese Ikko-Ikki’s ability to build shrines, similar to the Swedish, Inca and English with their unique houses built solely by villagers.

The other problem and which is more serious, are the ashigarus, first of all, historically these soldiers were peasants with little military training, hired by the shoguns and daimyo to use firearms most of the time very outdated and old (provided by European traders like Portuguese), it doesn’t make sense that this unit is vastly stronger than its European counterpart with much more training and probably more modern weapons. My proposal would be to reduce their statistics, perhaps the attack distance and the fire attack, in this way the Japanese player would be forced to use yumi or samurai archers to complement the ashigaru (like any normal civilization), it is really frustrating to play competitive games, and that half the opponents are Japanese using the same strategy over and over again, the ashigarus spam backed by shrines.

Other problems they have, is the fact that there are a large number of shipments and improvements that increase the infantry statistics, such as between the passive impulse of the Golden Pavilion, the improvements of the Golden Pavilion Arsenal, the regular improvements of the Arsenal ( acquired by allying with Dutch at the Consulate), Ashigaru Attack Cards, Passive Consulate Momentum, Daimio Momentum, and Shogun Momentum, the Ashigaru can reach very high potency in early ages, making it difficult to counter. All of this must be reviewed.

Finally, and excuse me for being so direct, but I think this was done on purpose with the shameless idea of ​​making the Japanese extremely powerful, the double sent from the metropolis, here I can only say one thing, NO, this should be totally removed For obvious reasons, it doesn’t make sense that only this specific civilization can send letters more than once, just NO.
In summary, there are many things to review, but it is important from my point of view to balance the Japanese, for almost 10 years many players have been waiting for it.
Well, those are my proposals, I hope you agree that the Japanese really deserve a nerf and I hope that everyone can place proposals that help improve the game.
Thank you very much and have a good day

If a villager could shoot the animals away it would be too easy to disarm the shrines, but it is indeed really hard to punish a Japan’s greedy play. The only reasonable nerf I could see hitting Japan that might help your cause would be a small HP nerf for shrines. With an HP nerf, Japan players might reconsider building shrines close to the opponent’s base. The way things are now, shrines are always worth building because they either pay themselves off quickly or buy enough time for another two shrines to pay themselves off. If shrines couldn’t buy as much time, Japan players couldn’t boom as safely.

I agree that ashigaru should be nerfed, or more precisely a decrease of hp/attack with a decreased cost.

Not so sure for the rest

Ashigaru with a speed nerf becomes less relevant. If they were to have 4.0 mov speed like normal musks. They would not be as OP. They are good because they can close the gap fast

Japan already got quite massive nerfs in DE, all auras are a lot weaker.
Damyios are also weaker. this should make Japan less excessive late game.
Japanese economy isnt even that strong. They only have 75 villagers and shrines are weaker than factories. You should focus on killing the Japanese explorers so they cannot build more shrines. Then send 5-10 pikeman to siege shrines around the map. Ashigaru still die to a single falconet shot and Japan isnt that good at killing Artillery

Reduce ashi range to 11 and lower the cost slightly to get the more comparable to standard Musketiere. Maybe also decrease hp or damage to get balanced. Janissary were changed with de liek this, ashi need the same even more urgently.

Samurai are better than doppelsoldner. I would say nerf samurai and don’t buff doppel to get this balanced better.

Also great idea OP, remove the protection of animals by shrine so you can still hunt these or kill off to hurt the Japanese.

Damyios should not be affected by the 10 batch consoluat upgrades!! It is super op to just traj units at front line with 2 Damyios and 10 unit batches. Nerf this ASAP please.

Also I think yumis dmayge per shot is unbalanced compared to regular skirmishers or longbows. It’s too strong.

Lastly allow shrines to train 20 herdablea with a new card like the cow and lamas er a tech in industrial age from the monastery so that Japanese player have a way to fill their shrine slots and be less map dependant and rng dependent in late game. This is to slightly compensate all the op units nerfs.

There is no consensus at top level that japanese are op (in 1v1, in team they are very strong indeed)

In lower elo games japanense can outshine other civs becausw there player don’t out constant pressure on each other. Japanese isn’t too strong first 10 minutes. It hardly matter if player just boom anyway.yes Iu can argue “learn to play”. But really we could improve the game slot for the average customer by working on this.

It doesn’t necessary mean nerfs for pros. Like nerfing ashigaru but making them cheaper basically only nerfs them in imperial age and at pop limit which is much more relevant the lower the elo sin e game tend to go longer without pressure.

The problem are the post imperial fully carded op unit stats per pop really. Same as Khmer war Elefants in aoe 2 low elo teamgames. Not a problem for pros, still needed to nerf.

You forgot livestock in team games for Japanese players and I mean a normal players economy like a bank or factory can also be fairly easy neutralised, unlike shrines. Id say allow them to hunt the animals, but not scare them away.

Ashigaru is powerful, but with the addition of crossbowman, it will be neutralized. Yumi is more powerful than Asigaru. I think it’s a more certain neff to reduce their range or HP to weaken Ashigaru’s support and force other combinations.

Yumi is grossly more powerful that crossbows. Powercreeped at its finest.

Japan in the right hands is very OP even at high level gameplay. They got the tools to play either offensive or defensive. And can shine at both. Ashigaru is indeed quite strong while yumi is somewhat ok. Still strong in the early game

Powercreeped means that over time/patches/expansions the average units/civs/heroes get more and more powerful, slowly making what was once great just average.
It is a vicious cycle of buffing and ever stronger stuff.

Brit musks used to be best in vanilla, then they introduced ashi and sepoys, now there are caroleans.
Doppelsodlee got powercreeped by samurai
Longbows outclassed by yumi

Like how in leage of legends everyone has an escape and super complicated mechanics nowadays while orginial hero designs where very simple and limited in what they could do. But because they keep introducing these overcapable heroes even the old school heroes had to be changed to keep up since they got powercreeped.

Or how in wow ever more powerful gear is released

Or how in aoe2 there are now paladins stronger than Franks.

Well, in fact, to do everything you propose you should do a semi-ff at 8-9 min, and play aggressive against the Japanese, this sounds good but the problem is that the mass of ashigarus will continue to grow, and that this Whether it is effective depends on whether the Japanese do not decide to push with the ashis, in that case there is no other option than to defend with xbow or lb, what I am going to is that with time when one reaches fortresses, join cannons and skirm , Japanese is already too powerful, it has happened to me and I know cases of players who have reached fortresses and that their skirms were easily lowered by the ashigarus even with micro, and artillery is an issue, there are metropolises that do not have good shipments of artillery in fortresses, like for example Germany that can only receive 1 falconet instead of 2 like Sweden, it is more profitable from my point of view to send skirms and go for a hit and run and build a foundry and create them yourself is more time wasted , by now ashis spam is already very powerful.

You do not believe me? I have proof 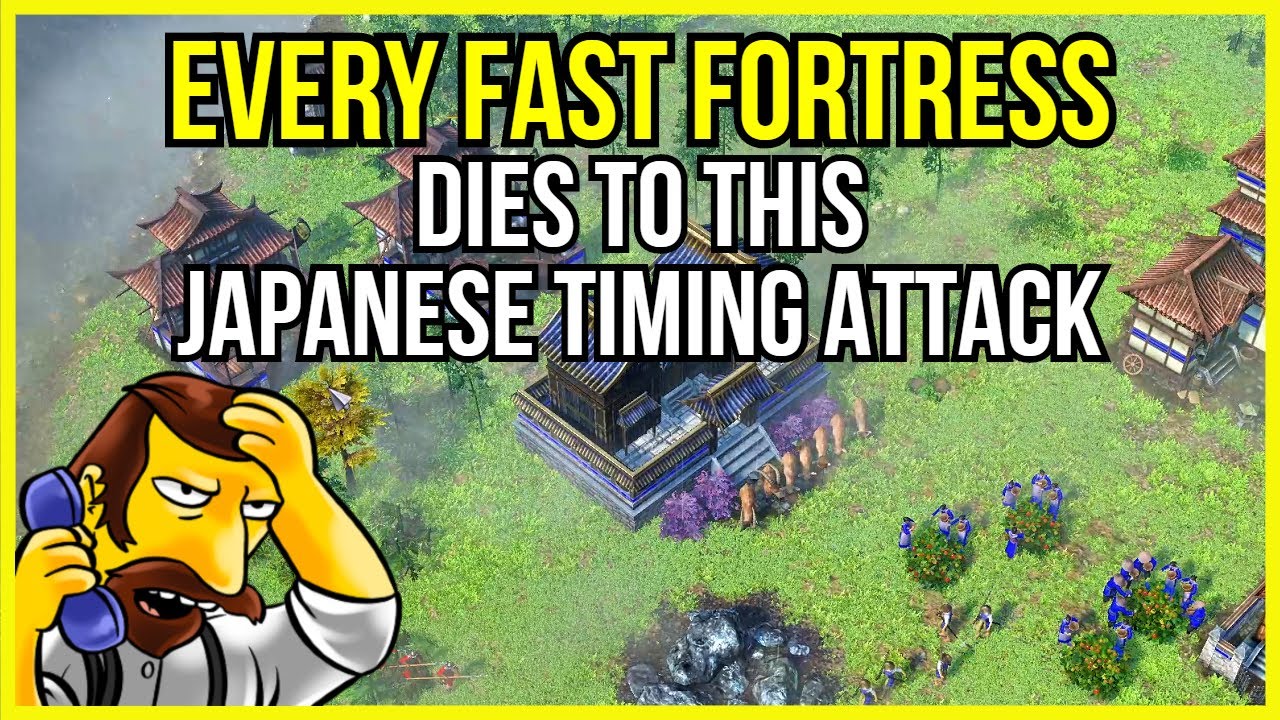 In minute 8 the mass of ashis is already very large, if it were more balanced, the British could have defended better.

japanese art is pretty poor, unless we talk motaru. like the flaming arrow is handsdown awful.

the problem is that japan is unraidable with horses or is to difficult to kill villagers with infantery too. And the explorers are unkillable, they dissapear making them invisible. (they return to town cener i though they were invisible sorry)
Daymios are overpowered, and hakamoto too, also they dont stand out of other units, its difficult to distringuish hakamotos among samurais

You can raid Japan, by destroying shrines.

Please guys, Japan is this way for 13 years, just let the developpers end the game before asking for that kind of things… U’re just flooding the demands.

for what im gonna raid a building that takes many mintues to kill taht equals 2 vilalgers? (edit: it equals half villgaer or 1 vills) i can kill 2 villagers on 3 secs , but japs vills are near town center all time