It should be a known thing, as I noted all that in the beta survey and was not the only one to do so… But the issues still persist. Each and every one of them.

The HRE feels very unfinished and broken. They are very underwhelming and have no marquee military strengths. The Abbasid infantry actually is better than the HRE one (+1/1 armor, double range for Spearmen, +15% hp for all inf vs 3 melee armor for spearmen, 2 weird MAA techs and 10% more movement speed for all inf (the best HRE tech of them all probably)). And that leaves the HRE actually empty, lackluster and plain bad. It just isn’t as apparent as they have a strong eco that overshadows many of their shortcomings. It won’t be long until everybody sees how inferior the HRE is.

And that is only the HRE I am talking about. The game needed another 6 months of development for sure. We are presented with another beta, it feels like. But maybe… Maybe there will be a day 1 patch that fixes most of the issues that are known for at least 6 weeks and longer. I sure hope so.

Yeah every game I’ve seen of HRE has been underwhelming…and not it’s the because of the players.

When the infantry civ has some of the worst and uninspired infantry, smh. My family has history with Prussia, Holy Rome, and the Teutonic Knights. I will play the civilization despite handicapping myself. I played enough underwhelming Protoss to find ways to cheese victory.

I would also like to add a Chinese bug to this post. The granary is larger than the mill but has the same hitbox for villagers to return food, meaning that there is a longer walk time to return food to the granary, essentially negating most of its +15% food bonus.

Is that still in the release version?

The prelate bug is such a big one, and maces are just pure numbers tweak.
There is no reason why this shouldn’t be fixed at release, it is literally gamebreaking of HRE when their prelates bug out and don’t work anymore.

That’s why there needs to be a day 1 patch. It would be really difficult to fathom if there was none.

So you don’t know?
Alright, the thread is quite pointless then and is rather aimed at bug reporting 4-5 weeks ago when stresstest was running.

No, I can’t know that. Relic didn’t say anything about it either. Everything in this thread is based on the AoE 4 version that has been released for streamers three days ago.

I am so dissapointed, i really thought they would at least fix the literally broken things like the prelet not working anymore. Just in my 3rd game my prelet decided not to use inspire anymore… nothing… as broken and bad as it was in the beta. Nothing fixed about HRE…

EDIT: It seems they actually did fix a little, but come on, the core of HRE (prelet) is still crazily buggy

The civ was fixed in some regards, but still is trash in regards of uniqueness and mechanic. It’s the most boring civ that only has a good economy, but other than that is pretty damn baseline and lackluster. The Prelate gameplay also gets confusing as you can’t double click them if you really wanna use a few for military and a few for eco. You would move them all and that is annoying. So you need to carefully pick the Prelates and group them up. Some of them also get lost every now and then because the all army command and search for idle military is rather useless for them. They are rather annoying to use in general. For eco purposes they are strong. For military purposes they are a liability and die quickly as they are as weak as any standard monk. The Rus and the Dehli have better monk gameplay and the Abbasids offer an always active aura for their Infantry. The HRE seems to be inferior in every regard. The only really good tech they have is the 10% movement speed for infantry. The rest is so very inferior to the techs of the other civs, it is not even funny. Nothing for cav, 2 inf upgrades that gets beaten by the Dehli with one upgrade that also improves knights. You would never know that the HRE was the greatest plate manufacturer of its time because they have not a single tech or unit that shows this.

And do not let me start with the Landsknecht. He is in the same state as he was in the beta, ends up with 104 hp fully upgraded and dies to every fart. Useless. You need to be brain dead to lose to this unit. They are 60 food and 100 gold and just vanish. It is like eating the softest veal that just melts on your tongue and you do not even have to chew it.

It’s just wow how far behind this civ is in comparison to the rest. I still don’t get it that mace + twohander tech are inferior to 50% of the honed blade tech of Dehli. Why 50%? Because the other 50% of the tech actually also improve knights.

Hi, my name is HRE and I muster the worst knights in the game. My knights are worse than chinese, mongolian, rusian, french, indian and arabic knights/lancers, because historically I didn’t even know what a knight is. So I should be glad that I can build them at all, right?

The HRE has nothing to do with the HRE. Nothing about it is right. Esp the Landsknecht is kinda the exact opposite of what he actually was. He was the core of the army and mainly used pikes and poleaxes. In the game, however, he is a auxiliary softy who barely gets a hit in before he dies. Unless the opponent doesn’t know anything about the game and how to counter the Landsknecht. A Camel archer three shots the Landsknecht. Thank you very much, Relic.

I know that balancing is about to begin only now. But I am still pissed off. The whole direction of this civ is utter trash.

If this civ was nerfed for their eco, even the most reluctant person would understand how underwhelming, boring and inferior the HRE is in comparison. The least unique civ by a long shot.

Edit: Oh wow, okay… So I will wait until my Prelate also breaks. I thought it was fixed, but maybe was just made less bad… ■■■■■■■■, this civ is trash.

Sorry to tell you but the prelet still buggs out… -.-

Oh… And another bug. Some units keep glowing as if they were buffed with inspiration, but they are actually not buffed. The buff has run out, but they continue to glow. That is not confusing at all… 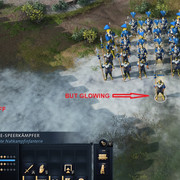 What did Relic do the last month? Most of this bullcrap I told them over and over again. Bad enough they don’t notice this stuff themselves. I think they just did the HRE and nobody in their studio actually likes this civ, which is why it is so terrible and lackluster. I just can’t fathom why the game or better this civ was released like this…

Edit: Prelates also try to inspire friendly workers, but they don’t get the buff. So the Prelates inspire for nothing. This game is so unfinished… The real open beta has just begun…

I can also confirm now that the Prelates still bug out. Happened to me now as well. I think it happens less often, but it still happens. I am sorry to say that but this is pathetic. I can’t even describe how disappointed I am. Edit: Removed a bit of my whining. That was unbearable. 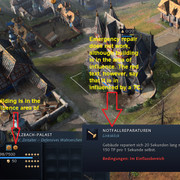 If this release teached me something then it’s never buya game made by Relic.

In regards of the twohander tech: The tooltip doesn’t show it, but it gives +2 attack AND 15 hp to MAA, making it a bit better. That’s why HRE MAA end up with 214 hp fully upgraded. The mace upgrade, however, is +6 vs heavy armor when not combined with the twohander tech, and +3 with the twohander tech. This has to be a bug, because why would a tech get worse when combined with another tech? That’s not the case for anything else in the game and it also doesn’t make any sense. They fixed the attackspeed bug, but not the damage bug… And it’s a bug that was in the open stress test as well.

To sum it all up: Twohander + mace gives 15 hp, +2 attack and +3 vs heavy armor (instead of +6). These two techs combined are still inferior (even with the 15 hp) to the one tech of the Dehli that gives MAA and Knights +3 attack. I can’t wrap my head around that. I think the Dehli tech just is too strong. The chinese have + 30 hp for their Palace guards and that seems to be in line with the HRE Twohander tech. But the Dehli tech is 3 attack for 2 of the stronger units in the game. Doesn’t feel right.

Aside from all the bugs and bad mechanics (inspiration), the HRE desperately needs somehing for their cav. A tech that gives bonus armor and a bit hp would be fitting and in line with other civs. I want to feel I play the HRE, I want the heavy armor theme for them. And no other civ has +armor for knights, so there actually is a spot for a HRE tech in that direction. Maybe +3 armor and +10 hp as an expensive tech that can be found in the monastery at age 3 or 4. And there should be a tech that makes inspiration for military a bit more useful. Maybe better range and one cast should affect more than only one unit. On top of that if units are injured, the Prelates always heal and do not inspire. It’s just not working very well. And turning auto heal on and off is way too annoying as well.

Much to be done there Relic, and that’s just the HRE. The game needs so much more in somewhat every department. As I said, this is more of an open beta than a finished game that only needs some tweaking. It needs a bit more than that. I don’t wanna think about when this game will actually be in the state it should have been for a release. I hope it happens still during this year, but I doubt it.

And releasing the game without offering a working ranked ladder, is a hype killer for sure as well. I just wish the game was finished…

I don’t know if that it is intended, but in my game vs ai Prelates were able to inspire soldiers, culverins, everything actually but not mangonels. They tried, tho. They were inspiring, but nothing happened. So the kept inspiring. It was sad to watch.

Inspiration is not only useless, it is so deeply bugged it is not even funny. They need to patch all that soon.

I noticed just another bug (not a HRE one, who would have thought), but I don’t know if loading a save game was causing it. Anyway, I loaded a save game, took archers from a wall and noticed that they kept the wall buff. Their range was incrased by 6. Permanently. I hope it only happens when loading a game. Otherwise this could be quite a big deal.

The mace upgrade makes MAA actually worse as it slows attack speed from 1.25 to ~2.3.

I remember reporting this in the stress test… >:(

I reported that as well and in a manner as if I didn’t have any other hobbies. I reported so much over and over again. To be precise: They fixed the attack speed bug, but not the fact that the mace tech gets reduced to +3 when combined with the twohander tech. That’s still a thing. Among a lot of other stuff.