Have you ever wondered which civ has the strongest Explorer? I have, that’s why I decided to check out every single civilization’s main Hero to see how strong and useful they can get. In this topic I’m going to talk about Western Heroes(European and Post-Colonial Americans) since they share a lot of skills. Native Americans, Asians and Africans will be covered in another topic in the future.

HP and Armor: Most civs Explorers peak at 3220HP. The Dutch and Portuguese can reach 3280HP and the British and Spanish can reach 3300HP, just slightly higher than average. As for Armor, they all have the same 10% Armor against ranged attacks.
Points to Britain and Spain, I guess.

Speed: The average Explorer peaks at a speed of 4.95. Interestingly, the British and Dutch are actually slower than average, sacrificing their movement speed for other attributes. Dutch explorers move at 4.50 and British at a glacial 3.83. On the flip side, Germans and Ottomans have the fastest Explorers, the Germans with speeds of 5.85 and the Ottomans with 5.95.
Point for the Ottomans.

Attack: Just looking at their attack stats, there is barely any difference between the Explorers at all. They all have a 43 ranged attack, 21 hand attack and 39 siege attack with +200% damage vs. treasure guardians and -75% damage vs. villagers. However, some civs do have a very slight edge on this matter.
French Explorers have +1 in both ranged and hand attacks and +2 in siege. Spanish Explorers are even better, having +2 in both ranged and siege attacks and +1 in hand attacks. They can be further boosted by their Missionaries that give them extra +2 ranged attack and +1 hand and siege attacks.
Russian Explorers have an extra bonus of +200% damage vs. Treasure Guardians, for a total of +400% damage against Guardians. However, when fighting other units, they are just average.
Points to Spain for the best general combat Explorer and to Russia for the best anti-guardian combat.

Building: When it comes to building, I guess we can look at it from two perspectives. Who can build the fastest and who can build the most.
When it comes to speed, there are only two Explorers that stand out. German Explorers build Town Centers and Trading Posts 100% faster; While Russian Explorers can build Town Centers and Forts 100% faster. All others build at the same speed.
Now, how much each can build varies wildly from civ to civ. Ottomans can build up to 9 Town Centers and Portuguese up to 12 Town Centers. French and Swedes can get up to 4 Forts, 1 more than the rest. Germans and Portuguese can only build up to 7 Outposts(all other European civs can reach 14) and Russians can’t build outposts or blockhouses at all. Then there are the Dutch which have a -50% discount on wood costs for Town Centers.
It’s impossible to declare any of them to be the “objectively best” builder since they have different attributes that are useful or not depending on your playstyle and situation.

Companions: All Explorers can summon Hot Air Balloons, for a time, and almost all Explorers have a canine companion that is also a Hero unit. The only exception is the Spanish, which can train up to 5 War Dogs instead of having 1 Hero Dog. But arguably the best companion available to an Explorer is another Explorer, available only to the Portuguese.
While the War Dogs are very useful in the early game, having 2 Explorers ultimately trumps that. Point to Portugal.

Unique Specials and others: All Explorers have some sort of unique attribute to them unlocked by their civ’s explorer upgrade card, some have already been mentioned before, but here is a full quick list:

Again, it’s impossible to declare an “objectively best” Explorer here since we are talking about very different skills that may or may not be useful to you depending on the scenario.

Personal Verdict: All in all, my favorite is the Spanish Explorer. They have the best HP, Attack and LOS. You can access most of their buffs very early in the game, when they are the most consequential, and the easily affordable war dogs can chew through most Treasure Guardians with ease as well as help with exploration and combat. Portugal and France are my second and third favorites. The Dutch and Ottoman Explorers are my least favorite.

Speed: The US General can reach the same peak speed as a generic Explorer, 4.95. Mexican Generals can be slightly faster, reaching speeds of 5.18. Not much else to say.
Point to Mexico.

Attack: The peak US General has similar ranged and hand attacks to those of a peak Spanish Explorer, 44 ranged attack and 22 hand attack, but a much higher siege damage, 56. All of those can be boosted by roughly 10% with the Inspiring Flag, reaching 49 for ranged, 24 for hand and 61 for siege. They also have a weaker version of the Russian Explorer’s unique bonus, having an additional +100% damage against Treasure Guardians and +100% damage vs. Outlaws(which doesn’t show properly on the HUD). Despite the rather beefy stats, the US General is once again trumped by his mexican colleague.
Mexican Generals, at their peak, have 56 ranged attack, 28 hand attack and 70 siege attack, exceeding all other Heroes we saw so far. These numbers can be boosted further by two different auras that are stackable: The Inspiring Flag and the Cinco de Mayo Fort auras. Reaching total attack numbers of 63 for ranged, 32 for hand and 79 for siege.
Again, not even close, point for the Mexicans.

Building: One area in which Generals are rather lackluster is building stuff. While Explorers can build Town Centers, Trading Posts, Native Embassies, Outposts and Forts, Generals can only build Forts and Trading Posts. Both Mexican and US Generals can build up to 6 Forts at a time, but the the Mexican General can unlock more buildings through Home City and Federal States cards. These are: Up to 3 Native Embassies, up to 7 Outposts and up to 4 (free) Field Jospitals.
Yet again, not even close, point for the Mexicans.

Companions: US Generals can summon 1 Hot Air Balloon temporarily, that’s it.
Mexicans can also summon a Hot Air Balloon through their General, but they can have a 2nd General AND The Padre, which is also a Hero with its own wide set of powerful skills on the battlefield. And there is more, Mexican Generals can also gain the ability to train Soldados from their position, wherever they are.
Point for the Mexicans. You might have started to notice a pattern here…

Inspiring Flag: Both american generals share the ability to place an Inspiring Flag on the map with increasing AoEs to boost friendly troops and buildings. By default the Flags grant: +10% damage to units, +25% workrate for military buildings and +50% construction speed for all buildings.
The US has arguably the more powerful Flag. Besides all previously stated buffs, it also grants +5% HP to nearby units with the Land of Lincoln card and, if you pick California, you unlock the Bear Flag which spawns 6 Honcho the Grizzly Bears everytime you replace the Flag on the map. Meanwhile, the Mexican Flag also has all the default buffs, but it can be upgraded to grant a further +25% workrate for military buildings. But here’s the kicker, with the Man of Destiny card, Generals also have the same aura as Flags, meaning that you won’t even need to place Flags as Mexico. And it functions for both Mexican Generals, meaning you can use your two Generals and the flag to 3 cover different large sections of the map with the Inspiring Flag aura effects.
While the US do have a stronger aura, I still think that Mexico takes this because of its practicality and massive coverage area.

This one is just embarrassing, point for the Mexicans.

Personal Verdict: I was genuinely shocked at just how powerful and flexible Mexican Generals can be, they have so many possible abilities that you can even break their unit menu in the HUD. They are not necessarily OP, but they do make all other Heroes we saw so far look weak by comparison, especially the US General which you would expect to be on the same level as the Mexican one.

That’s alot of work. Nice job. Nobody who plays at any sort of higher level ever boosts their explorer w cards that I’ve ever seen though. I will occasionally use the tp if I have money to burn, or of course the treasure buffs.

I find that the explorer upgrades are too costly to simply increase the explorer’s hard points and I find them to be of very little use. That is i why propose that in addition to your current benefits, you grant the following benefits:

Title of gentleman: In addition to its current benefits, the explorer loses all negative multipliers, and the ‘grand shooter’ attack can also be used against normal units.

Nobility: In addition to your current benefits, you can build native embassies. And you can build urban centers and trading posts faster. You can also receive shipments and increases your visual field.
Nearly outdated stuff that could be useful. (Potential improvements) - #134 by OperaticShip743

Scout Cards usually award one dog and one skill to each scout. Improve the attack and its resistance points. But I think that for them to be viable I would have to deliver something else. Could deliver a trading post cart or a number of experience points?
Nearly outdated stuff that could be useful. (Potential improvements) - #152 by OperaticShip743

Send a church wagon and also absorb the hero upgrade that allows them to have a scout dog, or the Indians to train tigers. This is one way I propose to make hero upgrades workable. This would be useful on maps where there are good treasures such as yukon, yucatan, araucania or great plains. Now instead of being a separate shipment, it will be enabled in the church at a cheap price, since the shipment alone does not seem like a very good investment. 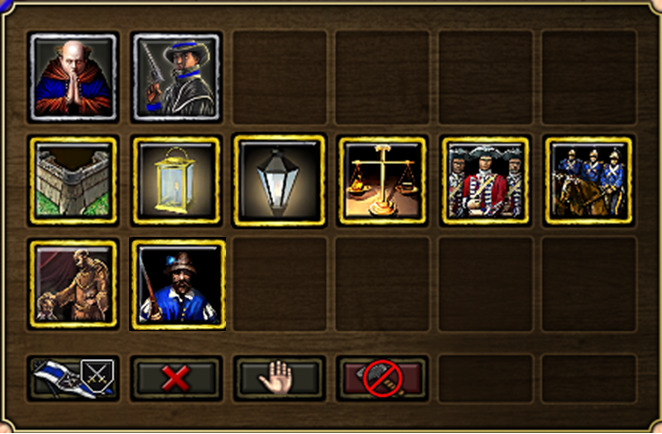 I find that the explorer upgrades are too costly to simply increase the explorer’s hard points and I find them to be of very little use. That is i why propose that in addition to your current benefits, you grant the following benefits:

Title of gentleman: In addition to its current benefits, the explorer loses all negative multipliers, and the ‘grand shooter’ attack can also be used against normal units.

Nobility: In addition to your current benefits, you can build native embassies. And you can build urban centers and trading posts faster. You can also receive shipments and increases your visual field.
Nearly outdated stuff that could be useful. (Potential improvements) - #134 by OperaticShip743

I think Knighthood and Nobility are fine as they are, but I like your suggestions.

Scout Cards usually award one dog and one skill to each scout. Improve the attack and its resistance points. But I think that for them to be viable I would have to deliver something else. Could deliver a trading post cart or a number of experience points?
Nearly outdated stuff that could be useful. (Potential improvements) - #152 by OperaticShip743

How about this. Remove these cards completely. Have their unique bonuses just be a part of the Explorer in their base form or to be automatically unlocked once you reach Age II. It makes them more in-line with newer and stronger heroes from others civilizations and helps to give each civ a more unique feel faster. The Hero Dogs can be a cheap Church/Mosque tech also unlocked at Age II.