In the patch notes, there are several mentions of improved performance in the late game:

I watched Jordan (https://www.twitch.tv/joadn_105) playing a 4v4 team game today, with expert players (most of which have high end pc’s). The lag in the game became progressively worse, to the point where it became unplayable in the very late game. True, there were players from different regions, but the lag became more and more severe as the game progressed, indicating that it’s not (only) a connection issue but also a performance issue. Everyone’s “clock icon” became red in the end. They played on the US West server.

Watch from 4:34:00 as the game becomes unplayable:

Yeah we’re experiencing crippling lag in DM games that we’ve never experienced up to this point.

Not improved is put very kindly, it’s just unplayable now in every game. Before the patch u had this lag “only” in some games. How can u release something like this?

@Kinquest can you edit title it has become way worse?

The lag in lategame TG is just horrible, and I m not even talking about all the disconnects / crashes.

If it’s way worse, it has not improved, or am I missing something?

I said “not improved” because of the claims of improved performance in the patch notes.

It is worse than before so technically “not improved” is wrong because it doesnt describe the state of the game correctly.

what did u update regarding performance and stability?
haha

For older people they made a FPS cap at 3 so they can handle late game.

well, maybe the lag in really really late late late game improved, because noone will be in that game anymore, because everyone already crashed?

Thank you all for the report! This is the top issue being investigated by the team right now; we will let you know if there’s any additional information that will assist in their work, or when we have any updates on the situation!

Thanks for your reply and the ongoing support. Much appreciated!

Haha, look how TGs look like. ALL players are red and lag as hell, its unplayable atm… 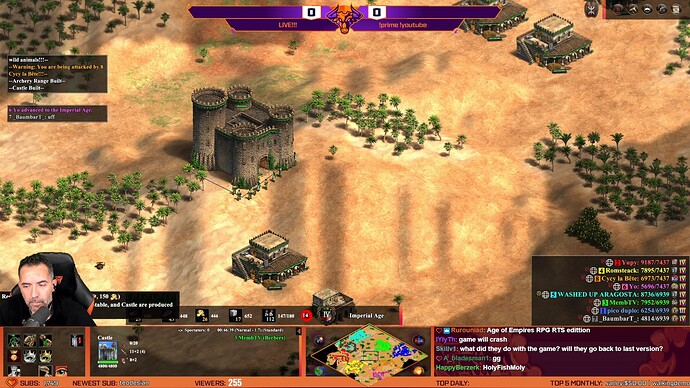 The same is happening to me in games against the AI, in 4V4 when it reaches post-imperial the game stutters a lot and it is very stressful, it had never happened to me

Thank you all for the report! This is the top issue being investigated by the team right now; we will let you know if there’s any additional information that will assist in their work, or when we have any updates on the situation!

for the love of god THANK YOU for being on top of this, this is really killing our enthusiasm to play the game currently. hope we see a fix soon.

I know we are talking here about Team Games but I played two 1v1’s yesterday and my opponents told me this was unplayable to them. I guess they’re not lying because I’ve never had an opponent complain about lag in 1v1 before the Anniversary Patch.
Not sure if I can do a thread myself to report the issue since I have no actual proof of it happening.

Also more on the subject : meta will be Siege Onagers with Arbs until they fix it lol

Thanks. I think it maybe related to multiplayer only, I played a few skirmish games on single player and haven’t experienced any lag.

In team games (4v4) the game consistently lags right after imperial. Almost everyone’s clocks become red. This is happening in every game, consistently, so it is not a matter of happening by chance. Something in the patch has caused this issue.

I can confirm this issue happening to me as well. I used to play with my friends before the patch and had no issues in imperial age. But in this patch, the game lags like crazy as almost everyone had a red clock near their name.

This is a duplicate of Late-game performance in team games not improved in anniversary patch. It is under investigation by the dev team.