My wishlist for the next big update

Hello, community! Together with the usual bug corrections, this is what I expect to come with the next big update adding new features to the game, in order of importance.

Some of these suggestions, and other great ones, were already mentioned on this topic: Some speculation about the future - Age of Empires: DE / I - Discussion - Age of Empires Forum

In this topic of mine - Let’s debate some game improvements! - Age of Empires: DE / I - Discussion - Age of Empires Forum - I have already pointed out everything I expect from this game in the future, but at the moment, I think these twelve features are the most important. What do you guys think?

Just update the game regularly. That’s all i want

I really want a treaty feature in the next patch.

These are excellent proposals. It’s everything I want too.

Gates and land trading are the most unlikely, because they mean new content. I have my doubts with the formations, but everything else should be implemented.

we definitely need those and much much more

Yes. To summarize, I commented basically what I want the most for the game here.

That is an awesome list, if they made this happen, i would recommend to other players I know to buy this game

I think the most important feature is Random map script interface, which enable player to create custom random map, which will vastly improve the current map pool. Moreover, this feature is easy to implement, since the game generates random maps from script anyway, the only thing to be done is expose that feature to player.

I think it would be nice if they released a new major update next month and announced a new DLC (at least a long term plan for a new DLC).

In a major update they could give two new civs - Iberians and Dacians.

I think that the DLC could include 5 new civs and new campaigns and Historical Battles - this game simply belongs.

It’s nice if the first DLC for AoE 1 DE focused on the areas north of the Roman Empire. This DLC could be called “Fall of Rome”, it would fit the name of another DLC - “Rise of Rome”. This DLC could include the following civs: Goths, Huns, Slavs, Germanians, and Celts. I think it would be interesting not only for AoE fans.

Enough with the speculating, @MUTYLATOR5553.

Unfortunately, AoE 1 is only speculation. AoM even bigger.

Yeah but you and some others turn every single thread in this forum into a discussion about Nubians, Mauryans, Numidians and a plethora of other civilisations no one has heard of, cares about or want in a game like AoE. I like Roman and Greek history and that’s it, I don’t care about the Lybians or whatever it is you guys talk about.

This is the reason why I play AoE I. 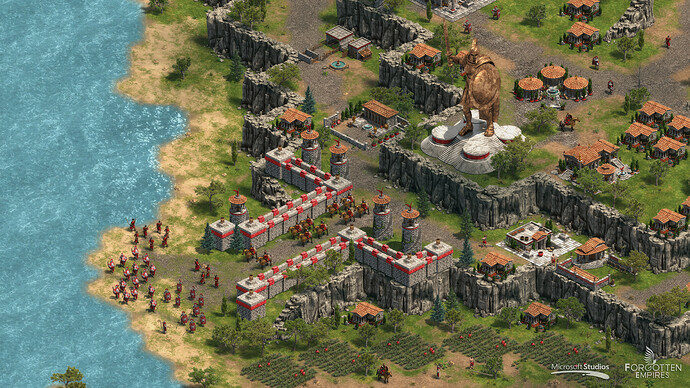 Just look at those Cataphracts and Legions, they are too awesome.

So you don’t want to develop this game …

Yes I do but you should leave that to the devs.

In your opinion, fans have no right to talk about the development of the game ???

They do but please don’t overtake every single thread. Just come up with one thread about all this stuff and stick to it.

In the case of AoE 1, this is not a problem. The more topics discussed about AoE 1, the developers see that people are interested in this game.

AoE 3 has quite a few topics that repeat themselves. AoE 2 is literally jammed with new topics.

In that case, start discussing and don’t stop until we get a new DLC.