This is my second civ idea from the list -New Civ ideas , the Trascans . They are basically a subfaction of Aztacs. So i got the idea of subfaction from the discussion - Can you add additional civilisations to DE?

Can you add additional civilisations to DE?

their idea is to use full tech tree as a generic civ when you start (in the example of using india). then at game start you have 3 vill and TC, in the TC theres loom, and 3 other technologies you can choose. each tech represent a sub civlization and by researching that particular tech, it’ll determine which bonuses and tech/unit are disabled from the full tech tree.

thats how they do it, which technically speaking you can play on full tech tree and not to choose a sub civ.

and you can actually do this in scenario editor. I did make a sub-faction “Kannadigas” with new unique unit “rajputs” with graphics from Omkar historical reskin mod, but i couldnt change the techtree. I think modders can do this … adding and removing techtree etc.
if you want to make it in scenario editor you can take help from this video : https://www.youtube.com/watch?v=2g4XjcBlPQg

So now for the Tarascan subfaction :

Unique Tech : Castle age : Chimalli shield : Quetzalcoatls chosen and eagle warrior have more pierce armor
History : Chimali shield constructed out of materials such as the skins of deer, ocelots, and rabbits, plants such as bamboo, agave, and cotton, precious metals such as gold, and feathers from local, remote, and migratory birds. these were traditional defensive armament of Aztecs

Imperial age : Quetzelcoatls spirit : if a unit is being converted by enemy monks it will get speed and damage boost

History : basically Tarascans were more devoted to Quetzecoal than Aztecs and Tlaxcalans (another subfaction i will cover later) . Their priests made frequent sacrifice to Quetzecoatl .This gave more moral to Tarascan warrior 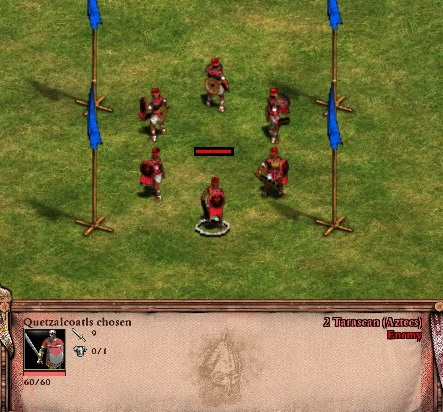 Tarascans were the second largest state after Aztecs among the Mesoamericans. Historically one of the greatest rivals of the Aztec Empire. They were in the position of defeating the Aztecs to become the preeminent power in all of Cemanahuac. The Tarascan empire blocked Aztec expansion to the northwest, and the Tarascans fortified and patrolled their frontiers with the Aztecs. Due to its relative isolation within Mesoamerica, the Tarascan state had many cultural traits completely distinct from those of the Mesoamerican cultural group.

Where are the civilization bonuses? The UU seems ununique.

This faction is a subfaction of Aztecs, they share same civ bonuses… UU is cheaper and weaker version of jaguar warrior

Ok then Ill change it

ya but many will argue aztecs already cover Tarascans… and as the game it is now its more easy to make subfactions than creating separate new faction, you can add new faction without removing one… but yeah if you want to create totally new faction then these reddit concepts are great

I’d compare Tarascans to ingame Mayans instead of Aztecs

Tarascans were not Aztecs. They actually beat the azyecs a number of times.

So they should be Mayan subfaction?

Can you check my New Civ ideas post and tell me if i should exchange Tarascan and Tlaxcalan UU ?