@UnivocalBanjo39 this is our Discord.

The post above has a link to Moddb host for the mod. Download the file and unzip. Then drop both files, one labeled with UI and the other with DAT into your local mod folder.

Make sure you have Enhanced Graphic Pack DLC from Steam installed and activated in game settings.

Once you have both files in your local mod folder, start the game, go into setting > mods, make sure the UI mod is enabled. Exit game and restart.

Before starting a skirmish or scenario make sure you select RAW DAT.

The UI file updates general UI graphics and string (text names of things in game). The DAT will point to many custom graphics like new units and certain balancing changes for the new civs.

Can add some more ancient civs of Asia to replace the remaining orginal AOE2 civs.

We are currently using East Asian civs for Greeks that may leave open South Asian civs. I defer to @TheConqueror753 for how we may be able to incorporate in some ancient Asian civs in the future. The Mod is primarily focused on Antiquity/Mediterranean basin and goal will be make sure we capture those first and any ancillary civs they may have come in contact with eg Indians for Macedonian campaign.

, but we now have numerous Celtic based civs, such as Britons and Iberians on the list to add.

You mean Celtiberians? I assume so, because the Iberians were a Preindoeuropean nonceltic culture on nowadays spanish or more precisely catalan soil.

Yeah, technically they are the Celtiberians, but that’s a bit of a mouthful, so I just shortened it to Iberians.

Is this mod available? I want to try it.

@WedInk504838973 see link above approx 4 days ago. There is a link to Moddb host site. It’s not done yet but there are several civs implemented and several more in development. We are also still creating assets for the mod and continuously working through updates, so check back often for updates. Right now they are occurring every two weeks.

We started on a new fort for Romans to make it more distinct from Greek version and better match the architecture style of the civ. Destruction animation is in progress. Goal is to have this included in next update.

Just going to give an update on the Greco-Roman new guard tower I’ve been working on. Still needs lots of work, and the gif isn’t too great (sorry), but I think it’s looking good. 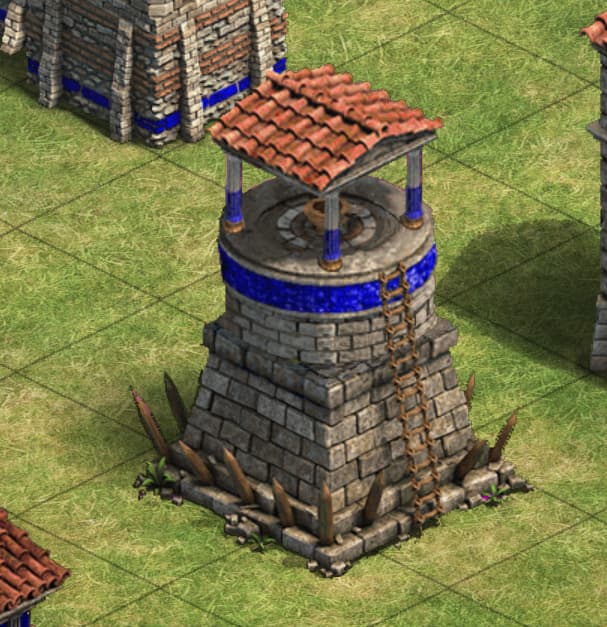 Have you downloaded or played the mod? Just out of curiosity.

btw @rjgt3838 will there be any special type of chariot units? I know theres 3 from AOE1 DE, and two from AOE2 DE, curious for other types.

I know, I wonder if I accidentally duped the first frame instead of the second one. There is some roof tile movement, and ingame, I think it will end up looking ok.
Edit: No, I didn’t dupe it, the collapse just starts off slow, but I can’t easily change the stretch thing. There is small movement in the roof tiles though. Overall, I think any discrepancies will be swallowed up immediately in the actual animation, it’s mostly because it’s just 7/8 frames that it’s noticeable.

btw @rjgt3838 will there be any special type of chariot units? I know theres 3 from AOE1 DE, and two from AOE2 DE, curious for other types.

We have the Scythe Chariot as the Persian UU, but other than that, the only chariot units are regional skins for Egyptian cavalrymen and Cav Archers, which use a mix of AoE1 DE chariots and the Ratha. We may consider more potential chariot UUs in the future, but none planned with our current civset, which won’t be implemented fully for some months still, so it’s not in the foreseeable future.

for the egyptian/saracen area to have unique chariots would be awesome.

They have regional chariot skins for cav units, but no UUs or actual regional units at this point.

Sapsan and I originally planned to have an elite chariot unique unit for Egyptians with custom/ornate upgraded armor compared to AoE Chariots. We decided to focus on region specific spearman units instead but always wanted to revisit. I like the idea of having more chariots in the game even for barbarians. If we can get through current UU list, we can explore this further.

@thieftdp8498 and @TheConqueror753 I think this will look fine in game. The destruction animations from AOE have a compression like affect themselves. If we keep frame count to 60 frames like AoE with a approx 30 frames to collapse its pretty quick and more forgiving. What is amazing is the details here for all the bricks and tile spreading out. Very tedious but amazing affect