Rome at War (RAW) was a mod published by Wild Fire Studios/Games (WFG) during the days of Age of Kings. WFG :: Rome at War (wildfiregames.com)

The work done by Wijitmaker and others was amazing for its time, it captured my imagination and sparked my interest in Modding and Roman History. That interest was rekindled with the release of AOE 2 DE, and accelerated by the work done by others who wanted to port AOE to AOE 2 DE engine.

WFG went on to start development of 0 AD (a free open source game) 0 A.D. | A free, open-source game of ancient warfare (play0ad.com). Originally 0AD was a total conversion AOK mod project focused on ancient history spanning 500BC - 500AD. They abandoned the mod once they realized the limitations of the AOK engine. While I think 0AD is an admirable endeavor that has progressed tremendously since its inception, it is a different game that embraces 3D. Unfortunately, that leaves behind the art style and detail I fell in love with in AOE which used 2D sprites. I am sure one day 3D RTS games will catch up to the graphical quality (personal taste/opinion) of their 2D predecessors, but I don’t think that day is today.

Folks like me, have powerful new tools available to us like AGE and SLX studio to mod both DAT and SLP/SMX Graphics, these tools along with access to 3D Marketplaces (CG Trader) CGTrader - 3D Models for VR / AR and CG projects | CGTrader where we can commission or buy original/existing high quality graphics, is empowering end-users (gamers) to a greater extent than ever before to create their own content.

So rather than wait for the current Developers or “Professionals” to build the game I and I suspect others have been longing for since childhood, I propose we create a new Rome at War (RAW) Expanded mod in the AOE 2 DE game’s engine. This Mod would convert AOE 2 DE into the 0 AD concept but use the existing game mechanics/graphical style of a 2D spite game.

What does the 0 AD concept mean to me? Capture the below civs to start (technology, unique units, and architecture) at their most iconic state in terms of look and feel. I know this may not be completely historically accurate, but that’s ok if it creates a beautiful looking and fun mod to play.

So how is this different than other AOE ports that have failed to date?
First, we have many of the assets already needed for Roman, Persian, Egyptian, Greek, Barbarian graphics when we port over AOE and borrow from other assets in AOE II based on my published Beta mod. So what do we lack to get a playable mod to the communit?

I am prepared to commit my own cash and time to create/buy/commission every Unique Unit needed for the civs in question. However, that alone is not enough. I need help from the community. In order for this to be a success, I need folks who are willing to bring their own expertise, talents, and creativity in Modding to make this project successful.

I have released a proof of concept already that mixes both original content and ported AOE assets. Screenshots and link to Beta mod found below.

If anyone would be interested in joining a project of this scale or help in anyway, please post here or message me directly. Thanks and happy Modding!! 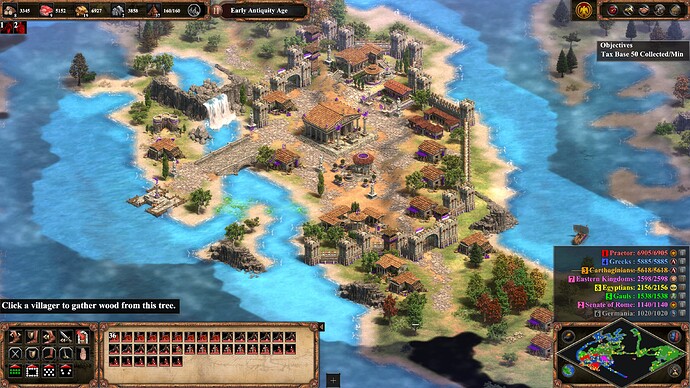 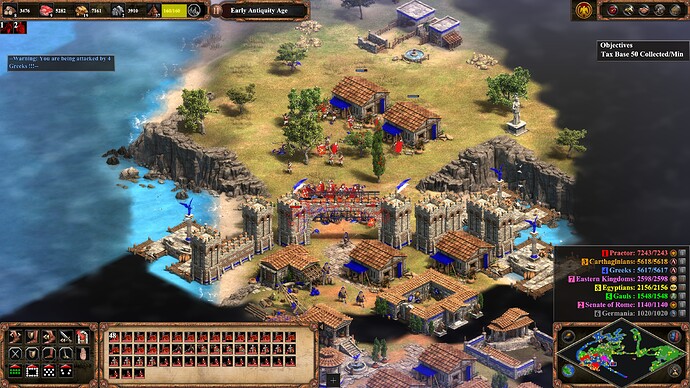 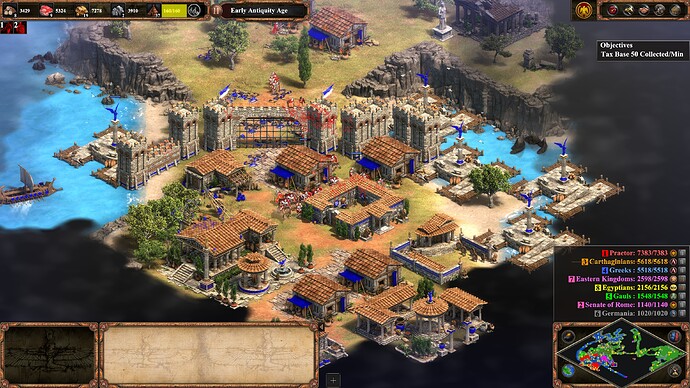 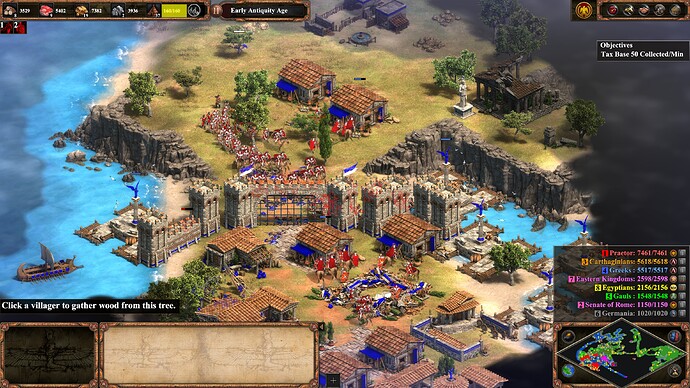 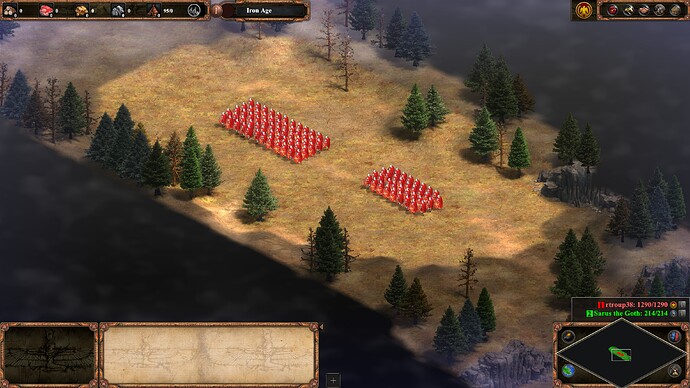 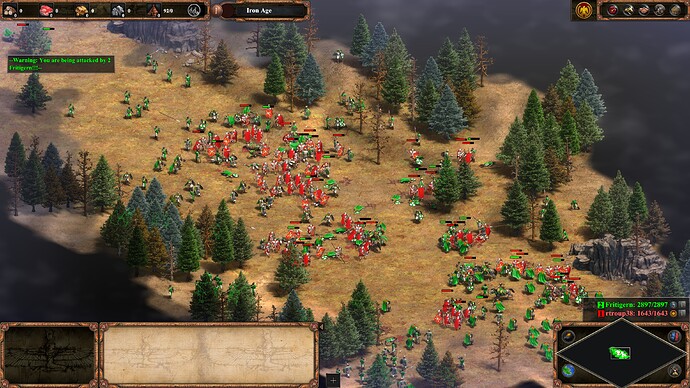 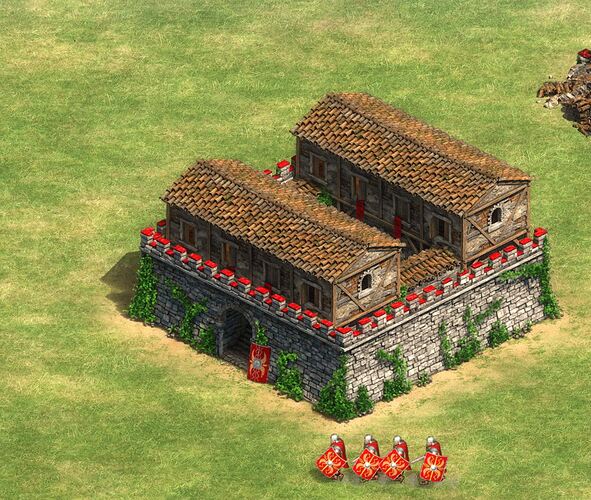 Will include Greek variant Buildings from AOE for Spanish Civ (Renamed Greeks).

Since this is a big project my suggestion would be to use what ever you can find as placeholder graphics and do the data work first.
Also gauls should be celts so they cover all of spain france and britain,unless you want to break them in to different celtic groups.

Having some fun, used Photoshop “Perspective Warp” and some good old fashion copy and paste to create diagonal walls for Egyptians.

Now what to do about gates 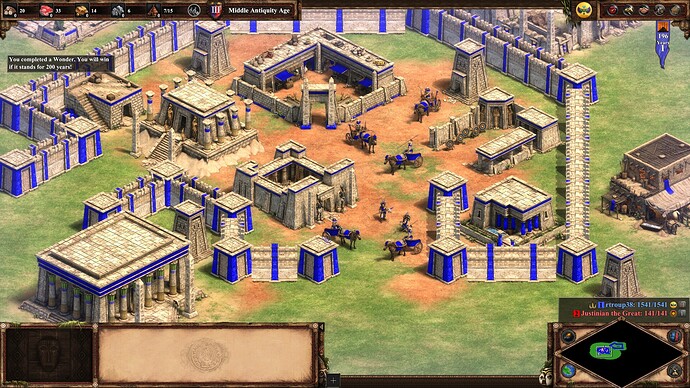 Below is an update on Roman Army tents: still a WIP.
Perspective needs correcting and need some darker shadows. However you get the idea: 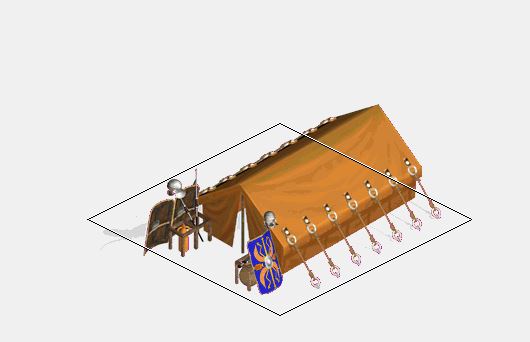 Finally below is a redone Roman Standard Eagle (smaller version included in Mod published already that replaced Flag F, this one has darker shadows cast on ground). 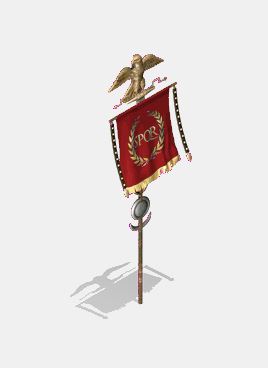 @Mahazona I could honestly use some help with DAT, sounds, language, AI, and balancing.
My passion is around the look and feel of the civs. This is where I would welcome some talented modders to volunteer and assist in anyway they can.

For the stuff that is beyond my abilities in Photoshop or Copy and Paste, I am using a talented 3D artist to create units, even the Roman Army tent pictured above.

My suggestion would be to first pick most matching civis first and then start working on the rest slowly.
Eg celts for gauls/celts goths for germanics huns for hun/scythian spanish for numidian/carthage 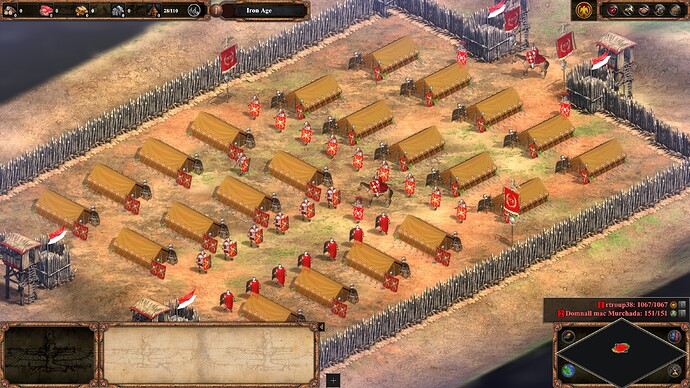 The tents look rather oversaturated. And need to be taller and less squat though.
More like these. 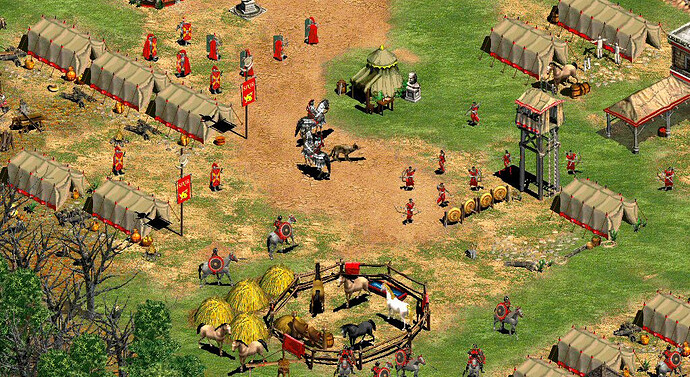 The tents were inspired by these tents originally, but I looked for better reference image. I think these tents do a better job capturing the look.

I think the height is being impacted here by fitting in existing 4X4 UHD footprint of replaced army tent. These will likely be incorporated into a DAT mod, and I am thinking I will slightly increase footprint and size. 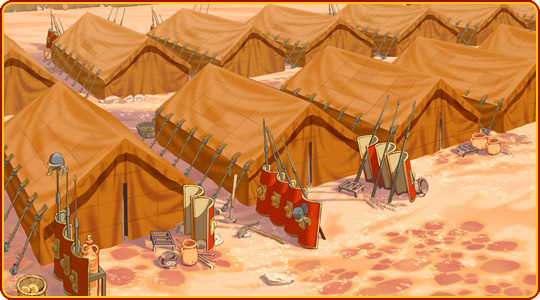 More pictures of Army tent this time with destruction and rubble animations complete.
This tent has been increased in size which fits better to unit size without need of increasing foot print of building, still fits well in 4X4 square in UHD. 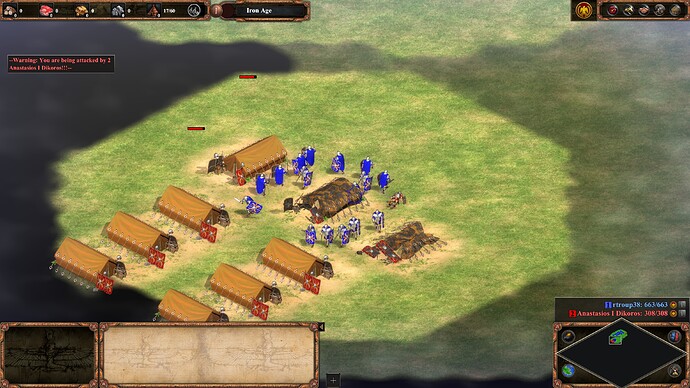 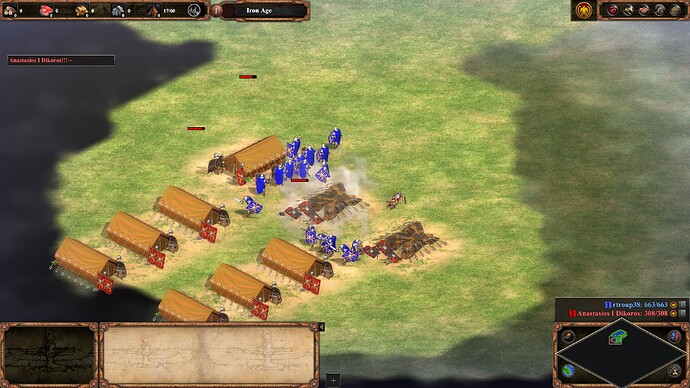 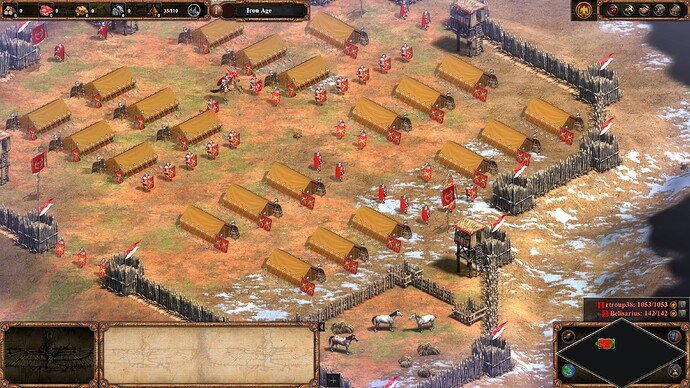 Still looks rather small. Should be taller.

Ok, you go make your own mod then

There is no need to be an ■■■ when someone is giving constructive criticism.

He gave the criticism and then the author explained why they were how they were. Done, you gave your advice, don’t carry it on

@PeakHornet46539 I appreciate the feedback but the reference images this is based off are more detailed and accurate than comparison shot from Rome at War (RAW). I am a huge fan of RAW and that content is what originally inspired this tent, but these tents capture the look and feel of the real thing which is far better IMO. As you can tell by the Scutum & pilum that is placed by the side wall, the tent height is correct as rendered. 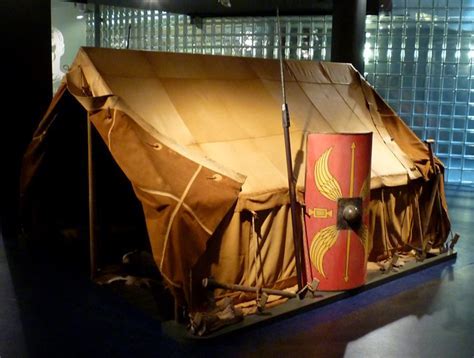 This is the same approach I will be taking with all new assets for this Mod. If I find a more historically accurate reference image that I think captures the look and feel of the object, unit, building referenced and have the means to make it, that is what I intend to do with this mod with as little compromise as possible.

@GusTank04 , thanks for defending my content sir. “Constructive criticism” is not a one way conversation. Emotional intelligence and the old saying “if you have nothing nice to say perhaps you should say nothing at all” seems appropriate here. I have spoken with other modders who got discouraged and ultimately left or got bored with Modding because of this. Giving positive feedback and encouragement is as important as giving negative. @PeakHornet46539 @Mahazona I believe GusTank hit on an important theme. There seems to be a lot of critics but not enough contributors these days. You both have great ideas, and a passion for this game. You even regularly post. I beg you both, get off the sidelines and contribute or help in a meaningful way. I for one would LOVE the help and I am sure others in the community would love any content you come up. I learned long ago, if you want something bad enough you better make it yourself rather than wait for others to do it for you!

We have started work on a custom King Unit for Romans.
Some reference images that will inform the new render.

This is the last bit of content for the next release that I posted about earlier. 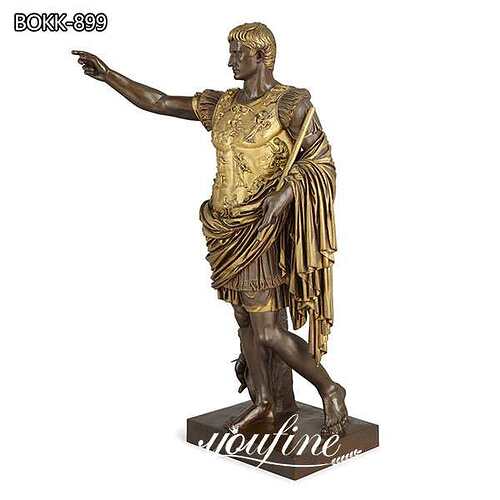 Will next move onto Unique Units for other Civilizations in the game. Current ideas below:

I learned long ago, if you want something bad enough you better make it yourself rather than wait for others to do it for you!

I agree 100% ,this game is still too young to be modded so there are less people contributing.with time this game would also reach the potential of the original game.

Greek variant of Fort to be released with next update. 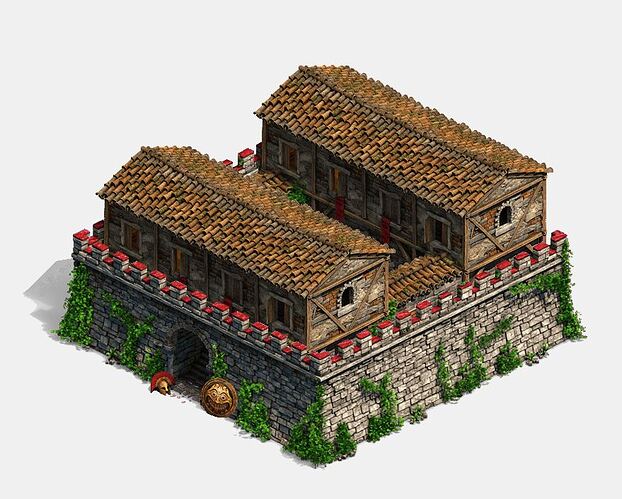