Seriously：The size of the aoe4 house is too weird!

Look, this is what aoe4 city should look like. The size of the house is very comfortable and does not affect the playability. After all, the blocked units only need to be highlighted,

I think the original purpose of the production team to reduce the house was to prevent players from mistakenly touching in street warfare, but this problem should be solved from the tactile feedback, rather than reducing the building. The size of the building is not the problem.

Please don’t blindly pursue the so-called “control and gameplay” and don’t give up the normal look and feel of the game. Excessive symbolization is not a good thing. Do you understand the horror Valley theory? The building proportion of aoe4 has been reduced to a serious discomfort. Please be sure to appropriately enlarge the size of the house in the later version.

Too much simplification will lead to a lack of appreciation of the game picture,

The building proportion of AoE3 is very appropriate. Why doesn’t anyone say it’s touched by mistake? In fact, the root cause of the mistouch problem is that the touch feedback of aoe4 is too poor.

However, the root cause of the problem is wrongly attributed to the size of the building.

Moreover, the false touch caused by the size of the building can be solved in a way similar to aoe2 small tree mod, and it can be left to players to choose freely according to their own needs. Before the Creative Workshop appears, the production team only needs to set a switch to select the size of the building, professional players choose small buildings, and players who pay attention to the picture choose large buildings, Everyone is satisfied.Isn’t this the best plan?

And in this process, the production team can also know what kind of building size the player really wants.

As we all know, the house of aoe4 was reduced before it was officially released, which also led to a very exaggerated proportion of people and buildings. For example, in aoe4, even if people squat down, they can’t enter the doors of most buildings, and the cavalry is much higher than the roof of the house.
Have you ever seen such a mini tent? QQ浏览器截图20220108053632788×658 53.5 KB
Especially in the historical campaign mode, no city looks like a city. In fact, it is not even a city, not even a countryside. It is more like a primitive tribal shack gathering place. When you see the tents in the scene, you will marvel that they are ridiculously small. 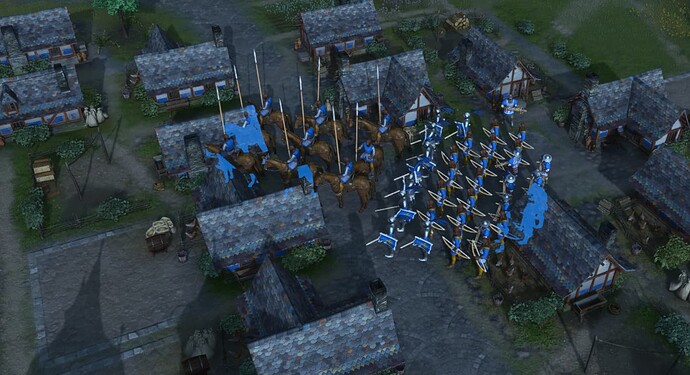 QQ浏览器截图202201080541131369×745 121 KB
There is no doubt that the building proportion of the current version needs to be further adjusted, or it will not be conducive to the players’ play in the future creative workshop. Imagine, if I want to make a map with a large number of artificial scenes, the whole scene will look very strange because the building is too small. 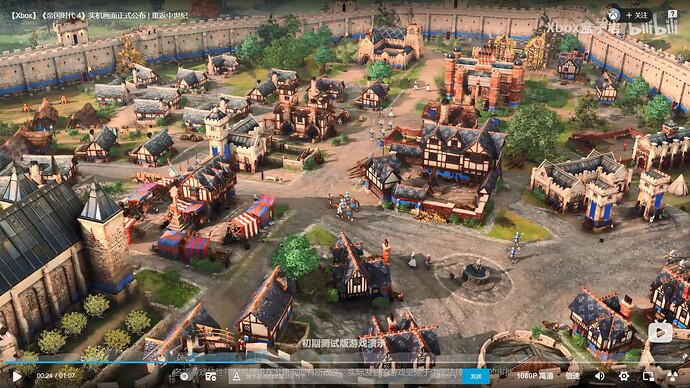 Still not as bad as AOE1.

I prefer smaller buildings like in AoE1, AoE2 had better scale. I don’t really think about it in AoE4 because there is so much more to think about.

However, in 3D, the building proportion of aoe4 has been out of balance to an unacceptable level. Obviously, they can do better if they can refer to AoE3…

Yeeeaaahh! Not gonna lie, the announcement trailers and teasers painted the game very differently from what it is today. Wish we had an option to make them bigger.

Some buildings are a bit small because they increased the size of the units slightly. The houses are curious because in the first ages they look small but then in the 3 and 4 ages they grow in size and do not clash.

But the main problem for me are the production buildings (barracks, stables, etc …) 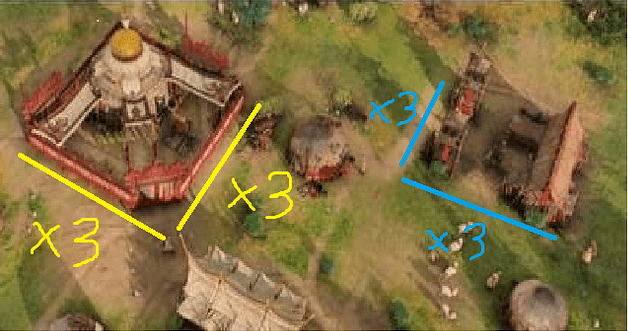 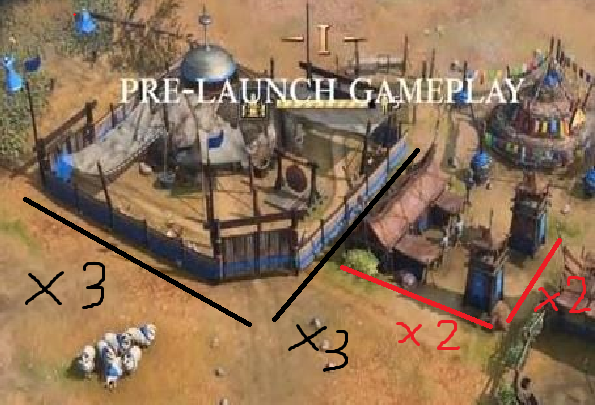 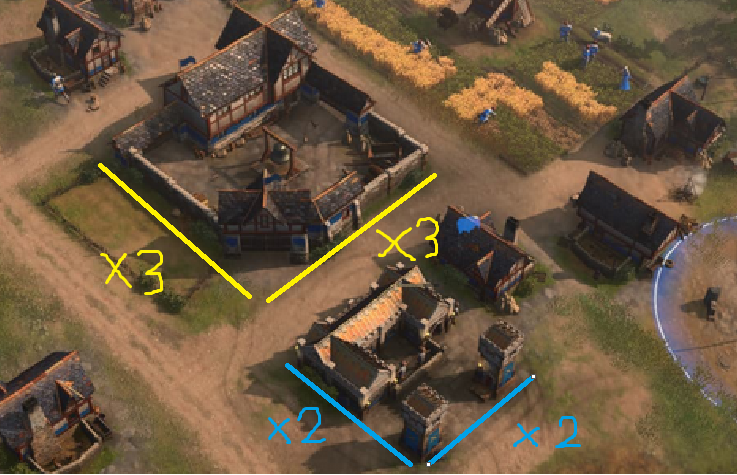 Due to gameplay issues, these buildings were reduced in size from 3x3 to 2x2. Rather than doing a visual rework, they were cut in size by more than half and this is why we see that these buildings are deeply out of place within the game even compared to other buildings.

Personally I hope that in the future after having solved the most important problems (bugs, balance). These buildings will be reworked (without necessarily making them bigger) to visually fit within the game.

I like the units being larger, it makes it easier to control them for a given field of view, when you express the field of view relative to building size. They could maybe make it a setting, though, so people can scale the size of units up or down as they prefer.

Am I the only one who thinks that the units would play better in both immersionism and overall feel of grandeur if they were all scaled down a tad bit? As well as being able to zoom out a bit more and having bigger maps? or am I just crazy lol

As one of those who have been playing AOE since childhood, I’m excited as the game is about to release. Overall I think the game is good and have lots of potential, but like many in the forum, I think something is wrong with the scaling and that must be fixed, here’s why. In short, AOE is a game about the balance of immersion and competition, AOE 2 does it particularly well and that’s why it has the biggest fan base. (Without AOE 2, there won’t be an AOE 4) However, the current AOE 4 graphic d…

The BIG problem of the proportions (and the solution) IV - Discussion

Before to star the post. I already know that proportions for many of you are a irrelevant topic. But for many of us are important and in AoE4 the proportions ara bad because a bad gestion of devs. The firs BIG PROBLEM. Barracks and in general production buildings. As you see in this image, in the alfa barracks was as big as Urban Centers. [imagen] I can understand that for gameplay reason devs could think that they were too big and reduce their size but… please, if you going to make smaller …

i feel like it is a problem of height too, if we give a look at aoe3 buildings they are usually taller , not so large 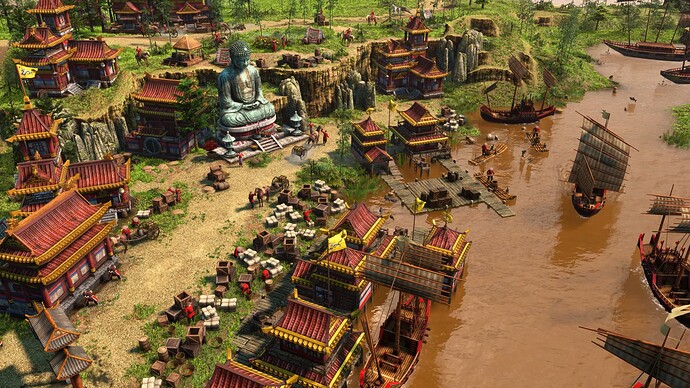 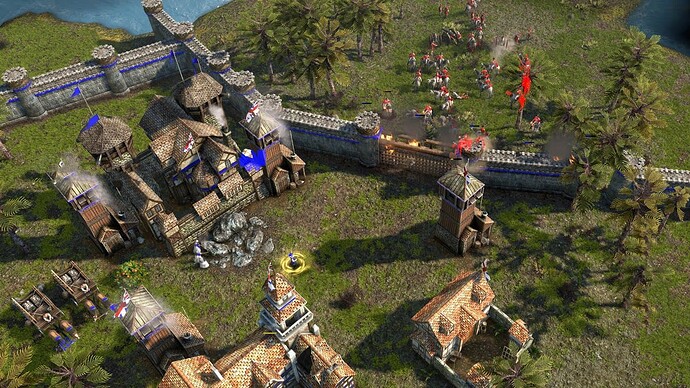 favor! They should set at least two options to meet the needs of different players.

Raising the building height is also a solution.

many controversial designs of aoe4 can be left to players to choose.

Aoe4 can be modified by referring to the building height of AoE3, depending on whether the production team is willing or not.

Not only the height 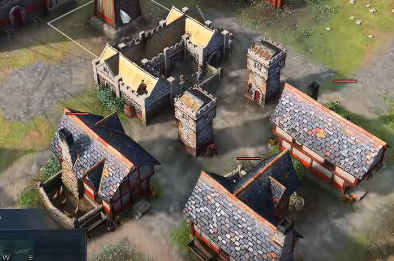 For example see this, barrack seens more little than houses, more narrow. I think that would be neccesary a rework of building for its new suface. 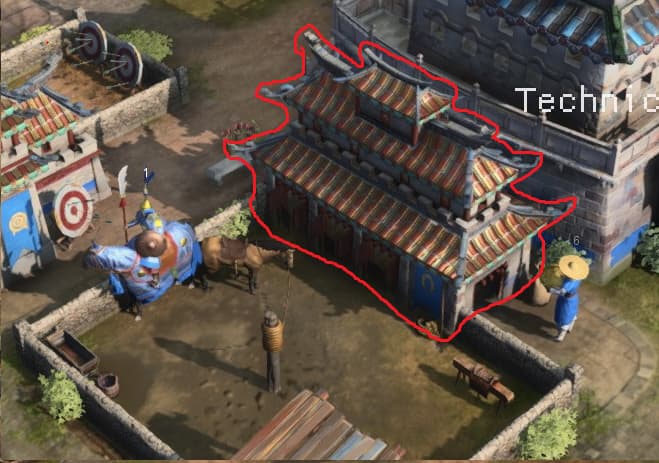 For example, the stable. Only would be neccesary to increase the size of the underlined building.
It could take up more land in the horse pen and would look good without taking up more space than its 2X2s. The buildings don’t really need to be much larger, just proportionate.

That’s actually imo the major problem with building ratio.
Okay if the unit-building ratio is by design smaller or larger, but the problem here is the building models themselves are inconsistent with their sizes and proportions.
It’s like they are first made with similar proportions in the same world (like, buildings could have different scales but their window/door/gate etc have generally consistent sizes and heights), then scaled either up or down differently to fit in the same grid. Then it feels like some buildings are designed for normal-heighted people while some only half-heighted.

i’ve never seen in previous games something similar to it.
Giant horse against pony. 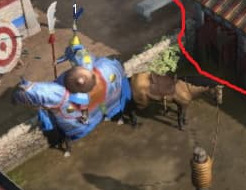 they wanted both building + space for horses… but failed in both.