Strelets, Not dealing well vs what they counter?

On a civ level though I don’t think that streltsy need to be buffed beyond maybe a range increase to 16 in age III. They are so cheap that they are very effective in early game, and Russia’s late game/treaty meta is musk, cossacks, and Oprichniks. Even so streltsy still beat regular musks late game.

16 range is same as xbows, I believe that’s enough to counter caroleans, which already been needed with counter infantry rifling, boyars and strelets combat.

It is obvious that current Russians can’t counter war wagons and howdahs, so it makes sense to give a range buff for veteran upgrade. However more evidence is required to prove that they are still bad in age4 with 16 range. The balance change should be done gradually.

problem with strelets is that they have too much hp and not enough damage, meaning that after age 2 they struggle to get damage in even when using meat shields and is antithesis to their attrition/ resource effective game style. making their stat-line more damage focused will let them kill their intended heavy infantry/ light cavalry targets quicker while being more vulnerable to their counters. and giving them 16 range veteran/18 range industrial will mean they stay a constant threat throughout the game. changing their wood cost to gold will also improve their attrition game style as the game goes on and simplify Russia’s resource prioritization.

Sttrelets are super pop inefficient the longer game goes. So buffing them there should be no big deal. The cost effectivity helps less and less as gane goes on.

I would change that veteran guard and imperial upgrade each gives 2 range. Do they have 14 at first 16 in fortress 18 in industrial and 20 in imp like regular skirms.

If you gonna buff then do it by buffing the upgrades and not the base stats or they will dominate age2.

I’m still against it, strelets are not designed to be used later game anyway, they are supposed to be an early game force.

The reason of using strelet is to overwhelm your rival in early game, don expect to win in equals battlets after a 15/20m++ game if ur rival did well.

But they could receive some upgrades to don’t be so useless in lategame as u say, I don’t disagree in that. More range sounds fair to me, +2 range in veteran & maybe +2 in industrial, is kind of sad that one can’t use such a funny unit after industrial age cuz is just not worth.

2 Likes
Why don't we work on another big fan patch that enacts all the changes we want to see?
Unit/Civilization Balance Changes:
Treaty Mode (Polls)
Dolphincup November 13, 2020, 7:16pm #14

I think there’s a lot of merit in making every civ more robust now that all ranked matches are matched through quick search. Civilizations shouldn’t have unwinnable match-ups, ideally.

Buffing strelets seems pretty delicate. From Khorix’s OP, it also sounds like giving an additional multiplier on their melee attack against HI might help in a lot of match-ups. range in the late game would help w/ ranged cav.


This is a Ranked match around top 50
Here is the first video I could make about Russia vs Swede. In this match many things could have been done differently. But here it shows why strelet need 18 range by industrial. @Leafy6224

This game I was able to delay the inevitable through Forts. But through army itself as most games go. Swede > Russia and very badly. And you can’t just say mass early and push them. The moment Swede gets to Fortress is a matter of how bad the swede manages his army

Now that we got a balance team and we can make the game better. Fixing civs so they don’t have a completely bad matchup like this. Like Russia only way is through canon. And these don’t go well because Swede has 6 Mamelukes infinite for 900 gold… Yikes

I’ll bring as many more proof as needed. just have to face them and record when I see them

Russia has nothing past 14 range But canons and forts. And these are easy to deal with

I have some feelings on this game, but you are a better player than me so these are only my opinions:

Buffing a unit for 4 more range is a huge change imo, and changes should be done very prudently. I suggest giving them 16 range first and observe the position it brings.

But who knows what devs are thinking, maybe they believe that 14 range strelets is totally enough

, idk whether they will enter these kinds of constructive balance change suggestion thread and consider them seriously.

Probleme with you @Khorix9572 is the way you play russia is totaly wrong. Your are behind the whole game, we can’t conclude annything about that game.

Probleme with you @Khorix9572 is the way you play russia is totaly wrong. Your are behind the whole game, we can’t conclude annything about that game.

Swe was op since the begining. And you know that no top russia play like you (because your style is not opti). Sorry but you are not a reference with russia.

Swe was op since the begining. And you know that no top russia play like you (because your style is not opti). Sorry but you are not a reference with russia.

You are still focusing on my gameplay while This post is about strelet not working properly vs what they are supposed to counter. Once again Show me Vods of Russia giving no chance to Swede. For the purpose of balancing their range.

This is a video game and you can play it however you want. Focus on the post…

You use your game as a prove, i told you your level is not good enouth to be considered like a prove. You loose this game at min 8 imo and the swe guy throwing like a big boss when he delate his whole army under your fort (your tc was free, nor amry and nothing to protect it).

Also, your arg is wrong, because strelet struggle at countering caro doesn’t mean they are bad against HI in overall, we knows how good caro are, and not representative about what HI is. I can show you many game where a big russian rush beat india

we knows how good caro are, and not representative about what HI is

Veteran Carolean [ Swede Musketeer ]: carded in Fortress has 15 range and it’s a musk. This is the most insane as a well played swede, completely destroys Russia. Keeping in mind that Caroleans by Imperial have 375 hp and 17 range, And by Industrial 16 range and 300 HP

Have you ever seen strelet doing well against a good spam of Eagle runners? There are a few aztec players who have done it and as russia you just have no answer to it… What is the answer if you have it? Aztec vs russia is known to be aztec favored but to the point that russia can’t really try to outplay as there is no tools?

Or war wagons + Skirms? If you try to play aggro you get kited down without a chance of making a play? Germany vs Russia is known to be Germany favored but to a point that leaves russia without tools to fight later on

If aztek manage to mass eagle against russia, aztek decerve the win ^^. Against german, maybe it’s hard but not impossible (maybe very hard now with the uhlan buff), because you are suppose to spam strelet + cosaque and cosaque snare where WW have the worst kiting animation of all time.

Open this topic on esoc if you want the opinon of very top players.

If aztek manage to mass eagle against russia, aztek decerve the win

So much for a balance. LOL

Against german, maybe it’s hard but not impossible (maybe very hard now with the uhlan buff) 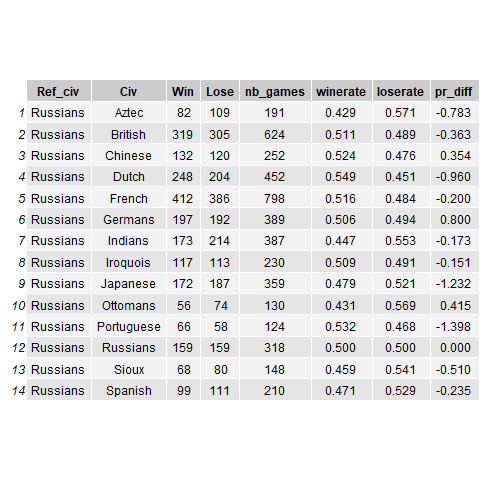