Taking into consideration of the feedback that I got last time, I’d like to revise those civ concepts one by one, and here’s my revised civ the Chams (for other civs I’d revise them as well if I have time, but for today we’ll just focus on the Chams).

The Chams is a Southeast Asian naval civilization. It represents the Chamic peoples and the Champa Kingdom they founded, which was an important trading and seafaring kingdom in medieval SE Asia, and it was also involved in piracy and often raided neighboring kingdoms. They fought with the Mongols, the Annamese (Vietnamese), the Malays, and the Khmers, raided the Chinese, and traded with Indians, Persians, and Saracens. Their kingdom formed around 192 AD and continued until 1471 AD, spanning much of the aoe2 time frame. After 1471 Champa ceased to be an independent polity and instead became tributaries of the Vietnamese, but it wasn’t until 1832 that Vietnam fully absorbed the last remaining Chamic tributary state. Chamic people were Hinduists in the beginning, but starting from the 10th century onward more and more Chams (especially the elites) had been converted to Islam due to contact with Persian and Saracen traders.

The first unique unit of the Chams is the Champa Pirate, which is an unique infantry unit specifically designed to raid enemy economy, as it has a bonus damage against Civilian Units (which include Villagers, Trade Carts, and Trade Cogs). It also has a bonus against Ship. However, it would perish pretty quickly against archers and cavalry, so be sure to keep them away from those units.

Their second unique unit is the Mong Dong, which is a fast raiding ship that fires hand cannons against enemies, they have a bonus attack against Infantry, Ship, and Demo Ship. It’s available at the dock in Castle Age and doesn’t have an elite upgrade, however it benefits from their Castle Age UT Sea Marauders, which gives it +10% speed, and also grants it the ability to transport up to five Champa Pirates. This is the only unit that it can transport.

Chams have okayish archers and infantry, only missing Heavy Cavalry Archer and Parthian Tactics from the Archery Range and the Eagle line from the Barracks. What they really lag behind is their cavalry, as they don’t have access to Camels, Steppe Lancer, Hussar, and Paladin. However they do have access to Battle Elephants and Elite Battle Elephants just like other SE Asian civs, and their Imperial Age UT Islamization grants them ten Mamelukes for free. Their Dock is their strongest point, with access to all units and technologies except Heavy Demo Ship, plus they get Shipwright for free. Their siege is only moderately good, as it misses Siege Onager and Bombard Cannon. Their Monastery misses Heresy and Redemption. The only economic tech they miss is Gold Shaft Mining. The only military tech they miss is Plate Barding Armor and the building techs they miss are Hoardings and Arrowslits.

Farms are 2x2 instead of the normal 3x3, though provide the same amount of food as normal ones. They cost only 25 Wood to build

Unique Technologies: Sea Marauders (Mong Dong +10% speed, and can transport up to five Champa Pirates), Islamization (trains 10 Mamelukes for free at their Castle)

it is a branch of the malays?

Then Franks are Britons.

They were a quite important kingdom in medieval SE Asia, traded with many peoples, and even managed to sack Khmer capital Angkor and Viet capital Thang Long. And they also defeated the Mongols in 1283. Just because you don’t know their history doesn’t mean they were unimportant.

They and the Malays are both Austronesians, however they speak different Austronesian languages, just like English and German are both part of the Germanic family, yet are different languages

The Chams should definitely have a farm bonus, their agricultural products such as rice and aloe were quite well-known throughout East and SE Asia at that time. Even the Chinese Song Dynasty had imported rice from Champa.

Chams were the only south east asian civ that didnt have a society based on farmers but on trading. I think giving them a farming bonud would be weird

Sure the Chams were quite into trade and piracy, but their agriculture was also very advanced, to the point that even the Chinese wanted their agricultural products, claiming that Champa rice strains were more productive than their own.

The farm bonus is op, rest of the civ sounds underwhelming.

This is the best image of a Champa warrior that I can find on the Internet. He wears a leather lamellar helmet and a leather lamellar or scale tunic, his weapons include a shield, a spear or javelin, and a curved sword. Champa pirate could be modelled based on this. 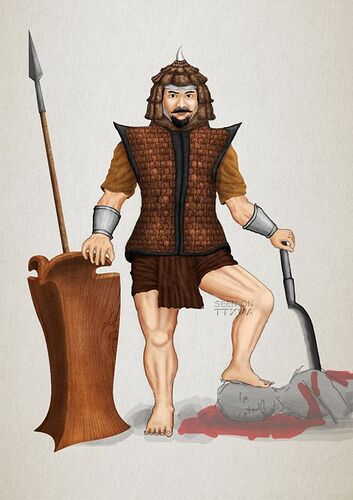 It has been nearly a year and I changed some ideas about this civ.

Battle Elephants are capable of cutting down trees (though one at a time unlike the Onager, could be useful for sneak attacks if the tree line separating the Cham player from the other isn’t very thick)

Unique Units: Champa Pirate (raiding infantry), Dragon Ship (same unit as the one in Scenario Editor, though with a twist: it has 5 transport slots, though the only unit that it can transport is the Champa Pirate)

Unique Technologies: Chinese Crossbow (allowing Crossbowmen to fire a secondary projectile similar to the effect of Hul’che javelineers for Mayan skirmishers, with the first shot dealing full damage and the secondary shot dealing 1 damage), Square Wells (allowing Farms to be harvested by 2 Villagers)

Archery Range - no Heavy Cavalry Archer and no Parthian Tactics, but have access to Elephant Archer and Elite Elephant Archer (I feel that Ele Archers should be a regional unit for SE Asian civs as well, not just South Asian ones)

Siege Workshop - no Siege Elephant, no Siege Ram (though have Battering and Capped Ram), no Bombard Cannon, and no Siege Onager

They were a quite important kingdom in medieval SE Asia, traded with many peoples, and even managed to sack Khmer capital Angkor and Viet capital Thang Long.

So what? There is a ton of civs missing from the original Age of Empires and no one complains.

So what? There is a ton of civs missing from the original Age of Empires and no one complains.

I’m not complaining, I’m just trying to make a civ proposal, which a lot of people have made before me.

Unlike many other civs that were being proposed, the Champa kingdom was a quite important civilization in medieval SE Asia. It was one of the major civs missing from that region, the other being the Siamese.

Who said that a civ must have a corresponding modern nation to be added into the game?

No one, but I assumed that was the devs PR behind it.

I’m not complaining, I’m just trying to make a civ proposal, which a lot of people have made before me.

Let me rephraze it “proposing”. In other words, people “proposed” similar changes to Age of Empires I but non were taken into consideration. We have 16 civs for Age I but we have already 42 for Age II. Do you find this odd?

No one, but I assumed that was the devs PR behind it.

Well, if that’s the case, then we shouldn’t have civs like Aztecs, Burgundians, Celts, Dravidians, Gurjaras, Goths, Huns, Incas, and the list goes on. This is a game that is set in the Middle Ages not the modern time, so whether a civ has a modern nation counterpart is completely irrelevant.

Let me rephraze it “proposing”. In other words, people “proposed” similar changes to Age of Empires I but non were taken into consideration. We have 16 civs for Age I but we have already 42 for Age II. Do you find this odd?

That’s because AOE 2 is much more popular than AOE 1. Feel free to complain to the devs of AOE 1 about the lack of civs. If you have nothing to add here or nothing nice to say, then please don’t derail my thread.

That’s because AOE 2 is much more popular than AOE 1.

Odd, because Age I was initially “the RTS”, not to mention the first one.

Feel free to complain to the devs of AOE 1 about the lack of civs.

People already voiced their opinions to no avail.

If you have nothing to add here or nothing nice to say, then please don’t derail my thread.

Not nice for you to assume that I am here just to waste time. We all discuss stuff here.