The power of Ashigaru

The British Musketeer needs 3 cards to have similar abilities to Ashigaru.

If the Shogun is with Ashigaru…

Interesting stuff.
Wh at if you add advanced arsenal upgrades to the British musketeer?

Wh at if you add advanced arsenal upgrades to the British musketeer?

Unfortunately, Japan also has it.

They have upgrades from golden pavilion and can get an arsenal from the dutch consulate, buy not advanced arsenal upgrades like infantry attack and hp

The Ashigaru that I showed you has already built the Golden Pavilion to upgrade the Fortress era.

Upgrades for Ashigaru can take extra damage without alliance with the Netherlands, as long as Golden Pavilion is there. 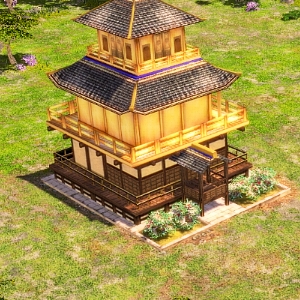 The Golden Pavilion is a wonder in Age of Empires III: The Asian Dynasties that is unique to the Japanese and can be built to advance into the next Age. It sends a shipment of Yumi Archers when built and enhances one of the stats of all military land...

That is interesting stuff

What’s even more surprising is they’ve never been nerfed

Sepoys are quite ridiculous units too to be fair.
Its pretty much the equivalent of having a vet musk on age 2.

Yeah,
But Ashigaru is more unfair.

what is isolation? consulate japanese?

And the worst part is the base of 4.5 speed, while other musk have 4.4 at max

The first picture is that situation LOL
The British musketeers also need 3 cards, other European musketeers can face them?

Ashigaru stack more upgrades…
But sepoy base damage and hp is way bigger.
If you stack brit consulate+cards+mansabdar they are equaly as broken or maybe more.
To be fair japan is actually weak late game, otherwise they would be OP on treaty which is not the case.
Once upgraded factories come into play japan struggles to keep up

Thanks to the opinion of the treaty players, 1vs1 match users are still suffering
Just because they are weak in the last game, there is no reason to dominate the early game.
For reference, a shrine has completed all upgrades will generate more resources than a factory.

If you think the factory is OP like that, play Europe.
I don’t think so, so I’ll play Japan.
If you think this is a pointless argument, experiment yourself and create a new thread with screenshots like me.

its not weak, its not op, but not weak.

If the bonuses for them don’t diminish, they should have lower abilities, even if they cost lower prices.

Well, very late game, yep, they are not as strong.
I do agree that mid game they are indeed op, and I know most euro civs won’t get to that point vs japan if they just let the Japanese player boom.
I think that all japan needs is a change to their crate start and then they will be fine as it will make their early game a lot weaker and other civs will have a larger window to hurt them

If you lose even with Japan, which simultaneously nurtures 10 units with damage of more than 60, you can certainly affirm that the person’s skills are insufficient.
Few units can consume 1 population and deal 60 damage.