This game won't be a hit

Which is why we’ve seen games like Valheim and Among Us pop off, and games like Cyberpunk 2077 and Outriders fall apart.

Cyberpunk 2077 was successful on next-gen consoles and PC. The complaints mainly come from past generation consoles.
Among Us was just a fad. Apparently that is intended with AOE-4.

One question, does Starcraft have cartoon graphics for you?

I believe that a game is not only made of how much the visuals please the community, it is much more about gameplay and fun, of course the game could be more detailed but I believe that this will not make people abandon the game. Old games are there to show it (tibia, aoe2 and etc)

Unfortunately I think we will see a lot of visual MODs for this game in the future.

Age of empires 2 is a work of art within the technical possibilities of that time. I improve substantially with the final version.

We are getting these kinds of threads because they have failed with the marketing for this game, let’s be honest it’s total crap.

But I have high hopes for this game based upon what I saw in the CB so I’m no longer worried.

Bite your tongue.
Let’s hope developers listen to the community and make the necessary adjustments. While there’s life, there’s hope.

And those two polls in this forum:

So to get a better overview about how people feel about the building size I wanted to make a poll to get a clearer picture. poll

Big poll for y’all to choose exactly what bugs you. Let’s see what we like and dislike the most. poll poll Feel free to discuss poll related things here. Try not to double post things you may have already wrote here

If you want more could find them. Is easy. And please! Stop yo repeat that "proportions all inacurate in all AoE. If you compare AoE4 proportions only are at the level of AoE1. The rest of the games are not 100% acurate but at least dont hurt your eyes.

AoE2 really is a great game. But with the definitive edition it also brought many gameplay facilities, such as shift to multi-command for villagers, fishing with a villager and delivering in port, among other things that made the game much more pleasant to play. It’s not just the prettiest graphic.

But I agree with you, for me AoE4 could have gone further in terms of graphics, look at this example: I personally think that AoEIV has better graphics than Iron Harvest, but hey it’s all subjective.

How many people play Iron Harvest?

At least give examples of games that are a success close to AoE2 or SC.

Look at the first screenshot.
You see a medieval town.
Now guess how many people would live in that town?
Probably more than 200.

But in Age of Empires 4 you will only have around 100 villagers plus up to 100 soldiers.

Having only so little people in such big towns just looks stupid.
The only way to make that look more reasonable and make units even visible is making them bigger.

I personally even thing the units should be bigger but they should allow us to zoom out more.
This is a game that has to be played not a trailer that just has to look good.

Just for you to see how graphics do not make a game good or not. It’s basically gameplay, I just gave an example of a game from last year that has better graphics than AoE4, because the topic here is about the look, not about success, or community size.

If you wish to find that much detail then you are playing the wrong game, check out games like City Skyline if you want everything to be more believable.

AoE has never been very realistic when it comes to the houses, unit scales and such and therefor doesn’t have to change now to be perfect balance.

As a curiosity I do not ask for total war graphics.

Did I say you did?

I would simply settle for not finding recoils on issues such as proportions or artillery operators with respect to previous installments of the saga.

Only AoE game that has manned siege is AoE3.
Proportions could be bigger I agree but it isn’t that big of an issue imo

I don’t agree that the art style chosen or graphics of the game will hinder it’s success in any way.

It will hinder it’s success if they don’t make a graphics DLC. This game will not last as long as previous installments if people don’t like the atmosphere

the majority of gamers really don’t care about graphics nearly as much as they do solid gameplay.

The majority of players do care about gameplay at least 3x as much as they do about graphics but even then, graphics are important for games to last long.

I dont si by a 100% accurate game. But when some proportions hurt the eyes there is a problem. In AoE 4 this happens with many buildings. And the comunity has said that. 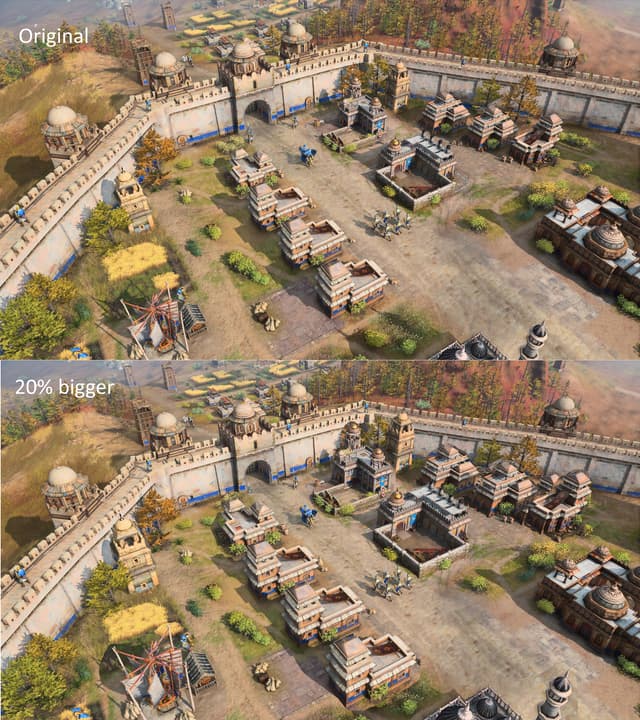 About this problem don’t you think it will mess up the gameplay? Remember the small trees mod from age of empires 2, many people use it to make the game better. Are these size decisions solutions to get a better view of the units in the field?

Only peaple with no statistic notion used this kind of POLL lol. 300 peaple responding to a disagreement, its nothing sorry.

Building size is fine (i am okey with +20% size but that wont change the story of the game), others grahics things are a way more questionnable (NDA, can’t talk about it)

This kind of poll are all that we have to see the comunity opinión. And i sold you 3. The problem are not those 300 guys. That was a representative number.

I don’t think your opinion reflects the majority.
I think it they would have designed the game the way you want more people would dislike it because it would be harder to play.

Personally I will be grateful if the devs decide to focus on more important things like balance or gameplay and I kinda like the new “cartoonish” style. Though I support the idea that some builidings could be larger, not enough to make such a fuss about it. I know many people think like me, it’s just that we are not as loud as players obsessed with having the same “realistic” graphs from AoE2 and other RTS.

I am not interested in your opinión. If you could offer some prooves, polls etc… I would see that.