Villager walks into foundation after placing and quickly right clicking it

If you place a foundation and then immediately right click it the villager will walk into the middle of it instead of begging to build it.

Cannot be reproduced in single player. I may be tied to latency in multiplayer?

Video of issue from replay:
House:


Note arrow confirmation and then flashing foundation when corrected.
Mill:


This issue maybe be the root cause of these reported issues:

Game Version: Build (Feb Patch: 35584.0 4714640) Platform (Steam) Issue: If a building foundation is placed with shift queue, the villager will walk to the middle of it and then walk back to the next queued task, skipping the building. Reproduction Steps: Start a multiplayer game. Build a building and then shift click the villager to another task. Villager will walk to center of foundation and then to the new task without building the building. Video of issue from replay: House: Market…

Villager ordered to construct building, but walks to middle of foundation and idles Report a Bug (Definitive Edition)

4 Likes
Villagers stand idle amid the building foundations instead of building them
List of unfixed bugs
Villagers not building issue
ZachAttack2961 March 1, 2020, 12:09am #2

Confirmed that clicking the foundation quickly after placing it causes this issue. This is only reproducible in an online game. It cannot be done in single player. In the video below I reproduced this in a private hosted game with bots.

Video of me reproducing this issue multiple time:

FE Dev CheeseOnToast looking into it: 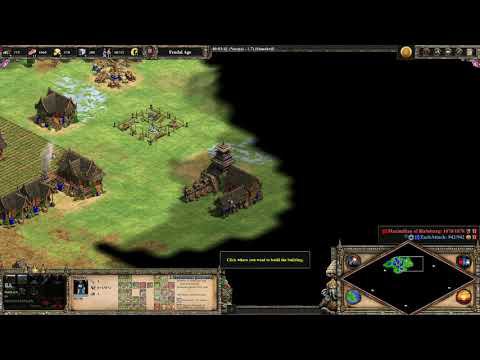 r/aoe2 - If you place a building and right click the foundation quickly your...

The villagers don’t construct the buildings that I assign them to build. They just go and stand idle amid the foundations of the building that they’re supposed to build.

Could it be connected to the new feature for holding ALT + right clicking which ignores buildings letting ur units move to a location?

is it possible that for some odd reason you have ALT pressed down?

Thanks for the reports and the ongoing diligence on this issue. I’ve bumped this issue with the team to make sure it’s still on the radar.

I highly doubt it. I might have made the error once or twice but this has happened in many multiplayer games.

I really appreciate it.

Thanks for likely getting down to the root cause! : ) This happens to me on occasion during multiplayer games and has for a loooong while. I just thought it was due to Internet lag, a slight out-of-sync between the game and the Internet/server, or the game just sometimes not liking me to right-mouse button after making the foundation (occasional bug).

For me, it was one of those bugs that bothered me, but I usually manually resolved it fairly quickly (select villys and tell them to get building like I originally wanted), so never invested enough mind power to care enough to report it. I think I even experienced this going back to Age II: HD; so just got used to it randomly happening. (Don’t know if it was the same cause back then.)

Sadly, by it happening, though, I now see (because of your post) that I’ve probably caused the issue to occur more frequently than it otherwise would have because to try and make sure my villagers do their job, I often right-mouse button again on the foundation right after initially creating the foundation in hopes the bug (or internet sync issue I thought it might be) won’t occur

It’s not too fair when you think they’re building something, then you check a minute or two later and they’re just standing in the middle of the foundation, lol. On rare occasion, usually late game, I’ve maybe gone 5+ minutes without seeing they never built what I wanted (i.e., a lumber camp way far away) and are just standing there.

So, thanks again! I can try to be more careful; and try to un-learn the habit of clicking the right-mouse right after making a foundation.

I feel your observation of it happening only on online multiplayer games is correct. I’m pretty sure I never have this problem in single-player games, and it’s why I’ve always thought the cause was Internet-connection related.

I am having a similar issue it happens in every game, it happens so often that have to constantly remember to check if my villagers are building or not, it is extremely annoying and distracting.

Villagers when assigned to build frequently don’t build but rather just go over on top of the foundation and stand instead of building.

This gets very annoying and mess up our build orders when we can’t get the barracks or enough buildings up to go to the next age.

Yes, same for me from several months… It’s really awful…

Did you see the post where the root cause is likely clicking twice; and may only happen in Multiplayer (not singleplayer)? I’m pretty sure the two clicks are left-mouse button to plant building, and then right-mouse button to try and confirm assignment of workers to it really quick. I do this out of habit in SP for some reason – which is fine there; but when I do it in MP, the issue happens.

Confirmed that clicking the foundation quickly after placing it causes this issue. This is only reproducible in an online game. It cannot be done in single player. In the video below I reproduced this in a private hosted game with bots. Video of me reproducing this issue multiple time: Replay file:

Regardless, the issue shouldn’t happen in MP. It should behave as it does in SP. I always assumed it was due to internet lag or something… but I’m not so sure nowadays. Seems like a bug

Started to happen after the January update. Really annoying

Yeah, I had it happen a few times recently, too :-/

Started to happen after the January update. Really annoying

Team confirmed this and has re-opened the tracking task for a fix. Thanks for keeping us updated; we’ll let you know when they’re able to implement a solution!

I’ve had this happen a number of times in the past few weeks – usually once or twice a game. In one game it happened constantly. I don’t think I am double clicking and it happens generally when not in a queue using shift.

11 no need to click foundation after you placed it. why you doing that ?

Has this issue been fixed? It started to show on my games now since the last update. There were no issues before and I have always been playing multiplayer.