After restoring a co-op game, 2 humans vs 3 of the new AI, on moderate difficulty, the bots would behave weirdly. I mean idle villagers on depleted resources (farms, mines), no military production, and small to no rebuilding. Also, the AI refused to resign, what forced me and my friend to hunt every villager and building down. 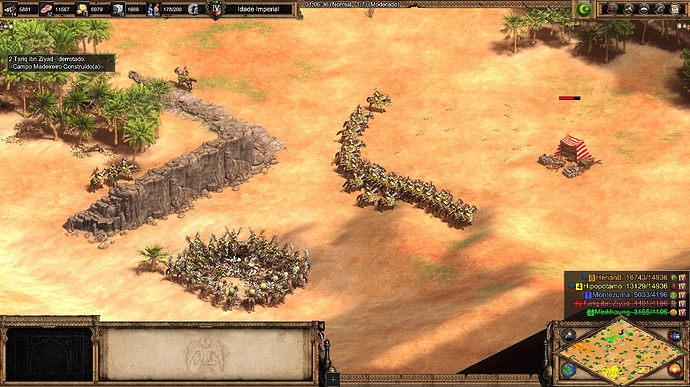 brokenai1366×768 404 KB
(screenshot taken with spies researched, btw)
I captured the moment the last building from red was destroyed. Note the top left corner, where it says “2 Tariq something - defeated (derrotado)”. The blue player was wiped from the map, with the exception of a lone market. The green player was eliminated before the disconnection, that’s why some green ruins are present on the map.
More than once i restored co-op games with my friends, with the same settings and difficulty, but this is the first and only time i notice this bug.
6 Likes
AI freezes after restoring a saved game
Restoring Multiplayer Game against AI - Braindead?
AI stops "working" after restoring dropped multiplayer game
Restore multiplayer game - AI stucked
Restoring saved game - AI no longer participates and is a walk over
AI not responding when restoring
List of unfixed bugs
HerianB December 25, 2019, 4:22am #2

I managed to find the recorded games. The first is around 50 minutes long. It shows how the AI is kicking, fighting back and managing it’s eco.

The second one is after my game drop and was restored. The AI does nothing at all - correcting my post. It stands completely idle.

Sorry for the inconvenience in the format changes. Also, sorry for my horrible micro - i had more than 500 ping, which caused my disconnection (my fault here, not the server’s).

I have been playing with some friends against the extreme difficult AI. After some like 10 minutes, the game of the host crashed and we saved the game to restore it. While restoring there were some visible bugs (civilizations and teams displayed wrong) but it worked and everyone got his village and civilization correctly. At minute 30 we realized that we were way above the ai according to the scoreboard. We checked on the AI and found it braindead doing what they were doing before the game was saved. Finishing the enemy was pretty easy because the only thing defending them was a single castle.
Shortly said:
The ai turns braindead when restoring a saved multiplayer game in which the host crashed.
Maybe this bug does not rely on a crashed host and its just a bug when restoring games against ai.

Not used to create topics in this forum so forgive me when I made it wrong.

Restore a saved multiplayer game will cause the AI freeze and stop doing actions.

Thanks for your patience! We just released an update that may resolve this. Check it out and let us know if there are still any issues. The full list of updates can be found here:

The problem/bugs is still there
When the host’s game crash, we save before it disconnect.
Then we restore the saved game and rejoin the game.
Ai frozen.

Still happening on every reloaded game. If the system didnt crash so usually wouldnt be necessary, but thats how it is.

I can confirm that this is still happening

The AI stopped evolving during the restored multiplayer game. AI villagers just finished their last job and then the AI do not control them anymore.

Just play a game with AI, save it and restore the saved game. Not all workers had that issue.

I have the saved games and replays, but I cannot upload a file as a new user. I uploaded the files here: http://leteckaposta.cz/774183032
The first record is until our player disconnected for some reason - do not specify, because there are some errors with disconnecting.
The second record is the restored saved game. The error is visible at the beginning of the blue player. He built the lumber camp and then stopped and do nothing.

AI stops “working” after restoring dropped multiplayer game. New units aren’t created, some villagers stop working completey whereas some still continue. AI doesn’t seem to “realise” that it is being attacked, so AI units only respond when they are attacked or enemy is in their line of sight. Most importantly, when I was playing a 2v2 game (regardless of difficulty), even though literally all units and buildings of one of the AIs was destroyed, it didn’t resign, nor was I victorious.

Don’t really think a screenshot would be useful.

AI stops “working” after restoring dropped multiplayer game. New units aren’t created, some villagers stop working completely whereas some still continue. AI doesn’t seem to “realize” that it is being attacked, so AI units only respond when they are attacked or enemy is in their line of sight. It took the destruction of every single building and unit for an AI to be defeated; they never resigned.

Also, did not receive an achievement for first win with this civ, despite it being so. This may be due to the fact that the civs initially load incorrectly for a resotre (says all “players” are Britons, but then they load in the game as their correct civ from the restore)

RESTORE OCCURS AROUND 27MIN
PLAYERS 1, 2, 8, 6 HUMANS
3, 4, 5 AI
-ai idle villagers keep increasing
-they never create military
-they don’t retalizate when enemies are building in their base
-the stats/timeline show a significant fall off at 27min (why don’t they ever advance to imperial?)

I have the saves and replays for the original and resotred games, but we can’t upload aoe record files here - what’s the best way to share that…? 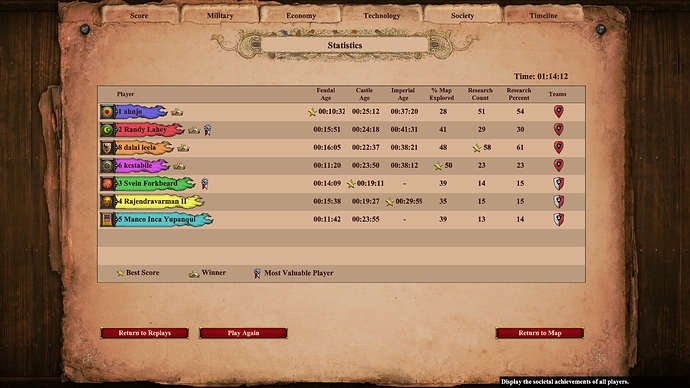 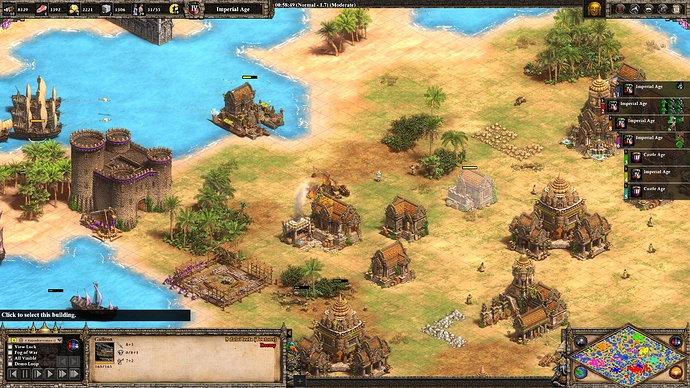 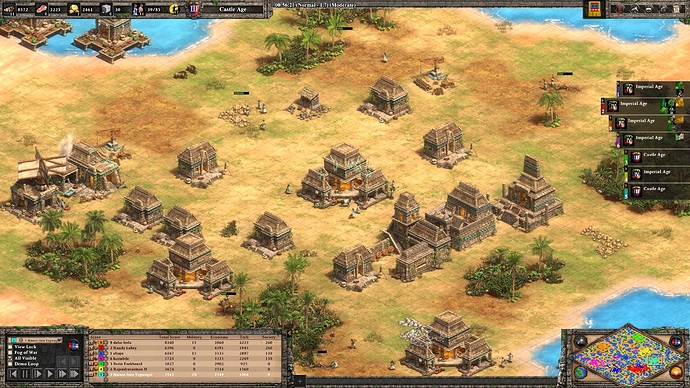 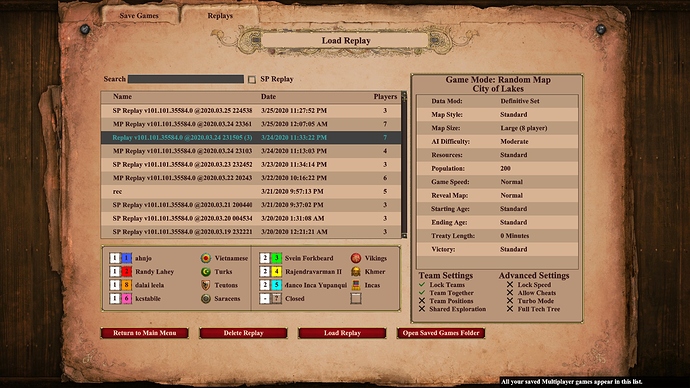 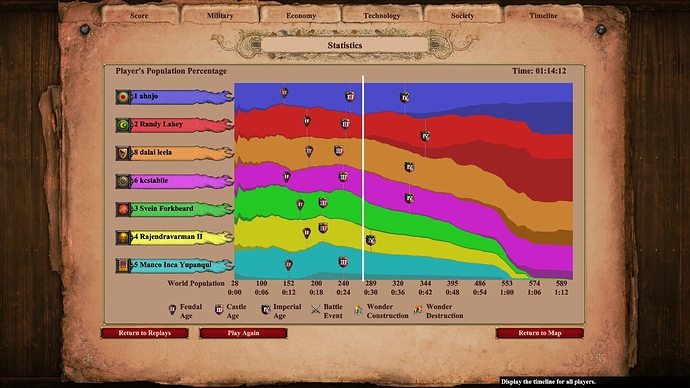 e just released an update that may resolve this. Check it out and let us know if there are still any issues. The full list of updates can be

Its still happening on every multiplayer load for me

I played a match with one friend vs 2 AI. My friend’s game disconnected, but amazingly, it was auto-saved (nice feature!). When he tried to restore, the AI was mostly not responding. Some villagers were still working but most were idle and no advancing of ages and new constructions were observed. In another match, same thing happened: my friend disconnected and an auto-saved was generated. This time I (who created the original lobby in both cases) tried to restore. We restored the match and the AI played correctly as intended. My suspicious is that the same player that creates the lobby has to restore it for the AI to not freeze.

Still happening as of April 5th 2020, have more saves/replays with evidence if needed.

(In fact, for some reason in two other games we started after this happened, the AI was brain dead from the start, never creating any military and not defending itself. I don’t know if this is related, but is strange considering that in this case there was no save file transfer involved).

This is still happening to me. I hope this will be fixed soon.
That moment when you‘re happy your eco survived untouched until imperial age and then you realise your hard AI opponents are still feudal and behave like afk after restoring…
Feels like a collapsing house of cards. I should learn to watch score though.

Saving a 2 vs 2 AI multiplayer game, returning it to it later or immediately with a restore, causes the AI units to no longer participate. The AI becomes a walk over.

Thank you all for the reports! I’ve added this information to a tracking task and included the replay files provided above! Please feel free to provide any additional files or details highlighting the problem, as it will assist our Test team as they work to identify the root cause of the problem.

Thanks for the report

I have the very same problem and also some friends do. For example, we play 4 human VS 3 AI, we save, exit, restore and sometimes the AI starts freezed, without doint nothing.

It happens both with savegames done by us and with automatic savegames when one of us loses connection. Not only for me, my friends have the same problem when I am not playing with them. Sometimes works fine when restoring; however, it is very annoying when it happens.

Issue:
I saved a 5 human vs 3 AI multiplayer game. I restored and when we started to play we noticed that the AI wasn’t doing anything.

Attachments
Recorded game from the start: one of us loses connection and then all of us exit the game


Recorded from saved state: we play until we realise that the AI is out


Saved game with AI already frozen (not the restored file, I overwrote it

This issue makes the Restore option unplayable if an AI is involved.