Has been announced in the stream for Redbull Wololo.

More info about it: 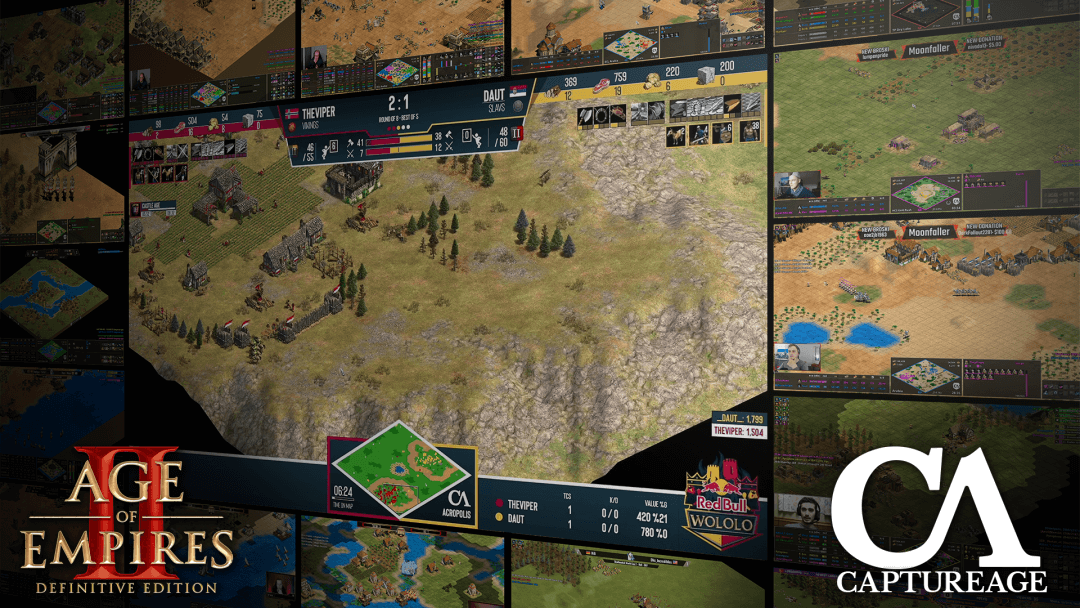 We are proud to officially announce the partnership between World's Edge and Capture Age.

6 Likes
[Suggestion] Roadmap for the future of AOE2
New SteamDB DLC for AOE2:DE
More statistics after / during the game
Gildorandir May 3, 2020, 5:35pm #2

We are proud to officially announce the partnership between World's Edge and Capture Age.

Not that much Info, but I guess it will be great.

This need to be part of the game already!

I have seen many threads about paid expansions: I would buy the expansion immediately if it would include Capture Age!

Now we need a place were all save games are stored, like already part of Voobly!

I love this news!

I would buy the expansion immediately if it would include Capture Age!

But I’d like them to implement Capture Age into the game.

Ofcourse. If it is an expansion, it become part of the game.

This is amazing good news! I hope that it also incentivizes the implementation of better post-match screens

Congratulations to the CA team.

As development progresses, Capture Age will be a stand alone tool providing a huge list of extra features to get excited for!

Does this mean it will always be a stand alone tool, and not built into the game for spectating and watching rec games?

And people continue to say the game has been forgotten about by the developers, and they don’t care etc. All I continue to see is an amazing commitment to the game.

Does this mean [CTRL] + [F12] will once again work someday to capture screenshots of the entire map?

I mean, the Capture Age partnership video shows this; so, surely, people who are actually playing the game will be able to capture such an expansive screenshot of the map for themselves, too, by hitting [CTRL] + [F12], right? 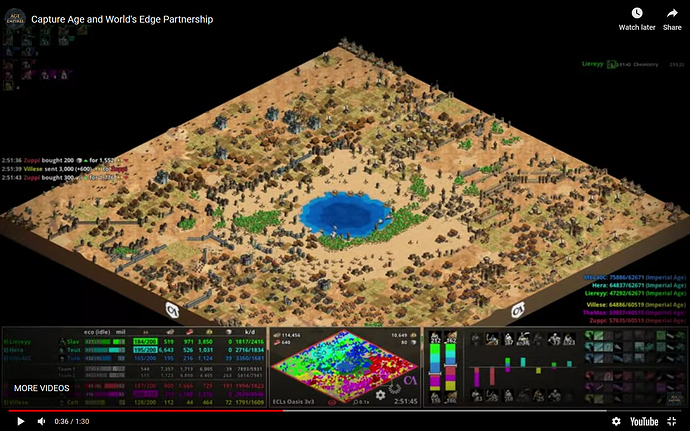 And does it mean players of the game we will finally be able to get more transparent semi-transparent overlays for various things such as chat messages and advanced info? Would love to have an option to adjust opacity for overlay backgrounds…

Because this is too dark for pop-up backdrops, imo; especially the first screenshot below. Let us, the gamer, decide what we’re comfortable with: 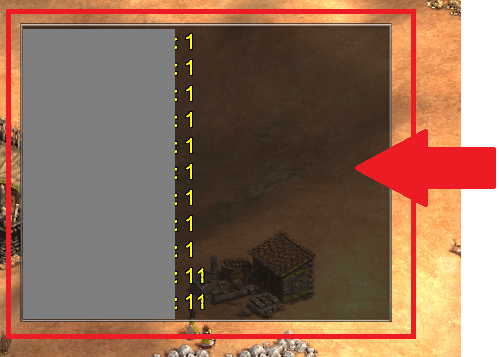 No backdrop in HD was fine (below), but if 10%-20% opacity were possible in DE, I’d probably choose that:

Looks like Capture Age has crafted some pretty cool stuff! Am excited to see what comes for DE.

Because this is too dark for pop-up backdrops

Thanks, I know. I want readability panels, just very transparent ones.

Not for tooltips, If I am not mistaken.

This full map capture feature coming with capture Age? I don’t understand what it does.

Check out the :30 sec mark of the video in the original post. They zoom way out so you can see the whole map.

As a community, we’ve been asking for the ability to take a full-map screenshot of a map you’re playing in DE for a while now. It used to be possible in CD version of game; but HD and DE don’t have the ability. The hotkey used to be CTRL+F12.

I linked to the thread where we were discussing it in my post above. Since it is hidden between screenshots and such, I’ll post it here for ease of access:

Is really good, but I need that improve the system for viewing recs, because always have to see one by one and it takes time to appear the elo, please create a filter for elo

I didn’t see this before today, but when I launched AoE2:DE, this in-game pop-up overlay said Capture Age is finally available for free to all players! I don’t know how much it cost before, but since I never sought it out before, it’s nice that they made it so easy to learn about and download. I thought I’d update this thread with this info: 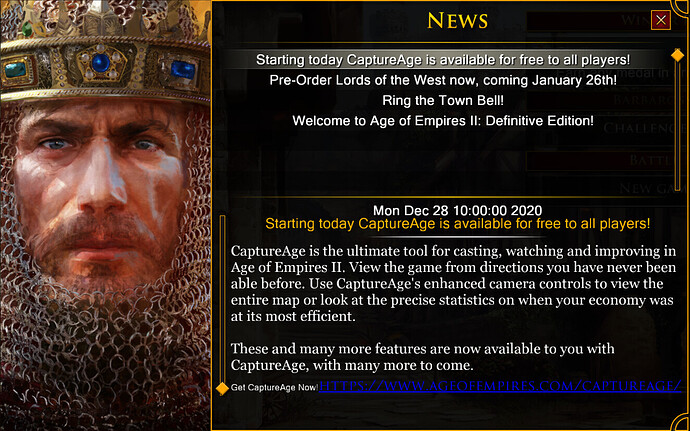 I don’t know how much it cost before

It didn’t cost anything before, since it wasn’t released for DE before. There is a donation-ware version available for the original game.

Has anybody successfully installed Capture Age? I tried version 1.02 and now 1.05. Both crashed after clicking on the button to connect it to Age of Empires II DE.

I successfully installed it, but it looks like maybe some “Lite” version of CaptureAge to me? (At least in the game replays I’ve looked at. I haven’t tried spectating, but I don’t see why that would be any different?) I’m curious what other people are seeing; or if they have experience from CA before, is it exactly the same here as before?

It doesn’t have all the cool colorful histograms, graphs, data, colors, bells & whistles, etc. that was shown in the trailer earlier in the year. Seems like a fair amount of buttons and usability was removed? It looks like this: 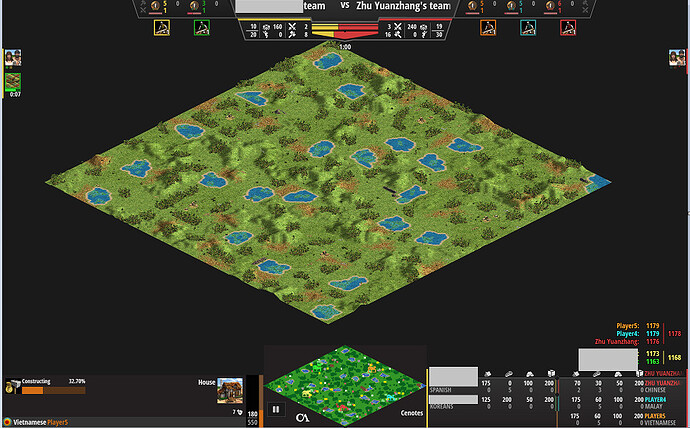 It feels a little cumbersome to use, imo. I’ve never been a fan of the UI fad sweeping the world where colors should be removed from icons, leaving only their cartoony single-colored 2D shape to try and symbolize what the intent is… with all buttons sharing the exact same simplistic colors/style. As a more visual person, this is a disheartening and may be simply to align with Windows 10 UI design standards. See these icons, for example:

In the above, I don’t see nearly the level of detail, UI design color, quality, or intuitive clarity show in the trailer before: 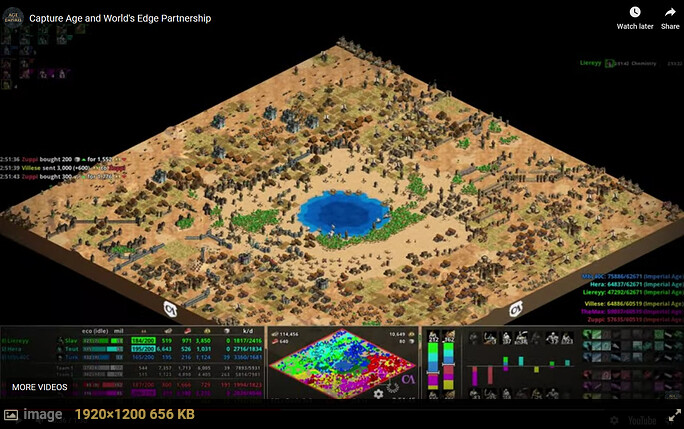 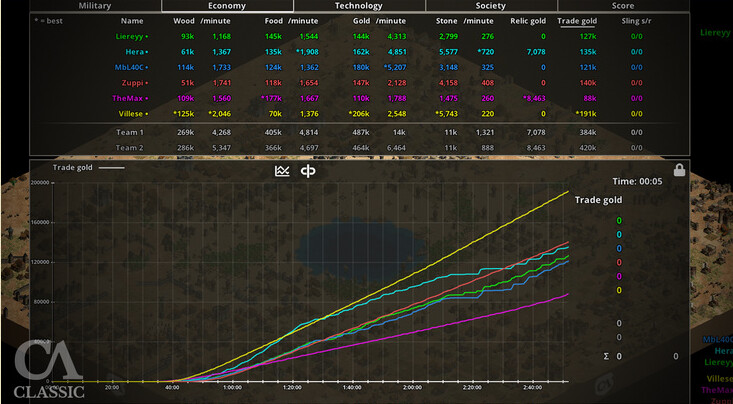 Hopefully for Windows 10 OS, “Cobalt” (<-- links to a techspot website) is actually happening and means a major Win10 UI overhaul for the better; where colors once again exist, another dimension beyond flat 2-D exists, and users can rejoice in improved, more intuitive design. If CaptureAge is, indeed, trying to align with Win10 UI standards regarding icons, etc., hopefully Cobalt will eventually lead to CaptureAge improvements

PS: To watch my own replays, it feels a little weird (cumbersome?) to have to launch AoE2:DE, start the replay, then ALT+TAB over into CaptureAge to connect to that game… but, hey, I’ll take it!

PPS: At least with CaptureAge, we can snag screenshots of the entire map from replays we’ve saved now, so it’s a roundabout way of making this happen, though not as simple/ideal as hitting CTRL+F12 mid-match:

Just have to be sure to save a replay while you’re playing so you can later go into CaptureAge to SHIFT + Windows Key + S to get the screenshot.