Come on Devs and MS! When a new patch? There are several pending things!

It fills me with pity and helplessness to see how they left this game aside, there are more things that can be added without the need for a DLC. I’m still waiting for: 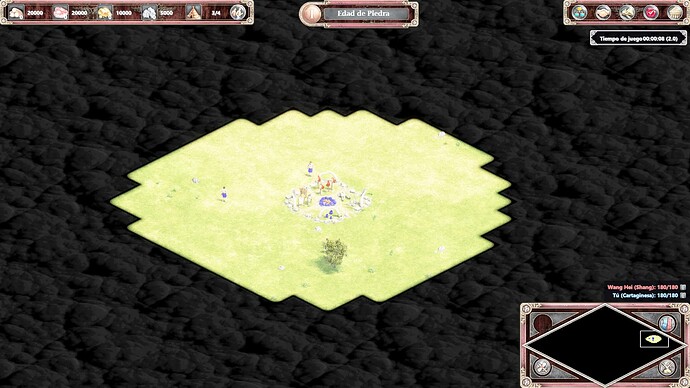 I could continue, but it would be in vain, in short, a pity as I discard this game, I hope if AoM DE becomes reality this does not follow this same path as the 1 DE , I hope that one day they surprise us and bring us some of these things that I have written here.

Its sad to see the game that started everything be neglected like this.
It had so much potential and it could have a solid player base probably just by adding a few features.

Looking at how the developers treat AoE 1, I come to the conclusion that this game will not receive any new content (there is little chance for any events, new game modes, and even more so for new DLCs).

AoE 1 looks like a game that was created only to be able to release the Trilogy - because it sounds better.

Hopefully the developers are considering creating AoE 5 embedded in the AoE 1 timeframe. This would most likely be the only opportunity for something new-ancient in this series.

AoE 1 DE is an abandoned game…

Change the drag system of the camera with Right Click, when you drag the camera in AoE 2 and 3 DE with right click you can keep the mouse still, and move the camera with a slight inertia, in AoE 1 DE it is very rough and you have to move the mouse in addition to not having inertia.

I like it how it is. In fact, I don’t like the “legacy” behavior in AoE2:DE, but the one in this game. Optional settings is what this game needs. Customization, please! @fe_dev_team

I want infinite resources option too!

Add hotkeys to the technologies, AoE II DE and III DE They also have this feature, you cannot miss something so basic for a DE.

Yes. This is much needed. I agree with you, considering this is a DEFINITIVE edition, and not just the original game with a revamp in textures!

Yes. I would love Age of Empires 1 DE to have real-life maps. Would be very cool, though it also would need new terrains, assets, animals and props, since this game is mostly Afro-Eurasian only!

Hopefully the developers are considering creating AoE 5 embedded in the AoE 1 timeframe. This would most likely be the only opportunity for something new-ancient in this series.

I think its more likely that they will do an age of mythology 2 rather than an aoe5 embedded in 1. Which is probably one of the reasons why aoe4 was some sort of a reboot set on medieval ages, obviously the main reasons being the success of aoe2.

That could be possible. But it feels a bit unlikely since AoE3 doesn’t look old at all, specially with DE and all the changes and how they keep adding new content and new game modes coming.
It’s more likely that they will keep working on aoe3 and adding new content to it like what they are doing atm.
It also depends a lot on how well aoe4 goes first though.

If a sequel to AoM is released including all content from the original + expansions, that would be dope. Both AoE1 and AoM deserve good amounts of love.

I love AoE1 but it’s a bit of a miracle it got a DE version at all. I view it as a ground-testing and fans service project.
Played recently (solo) and didn’t encounter any bugs.

What’s your prediction for the Age games now that the 4th was released? 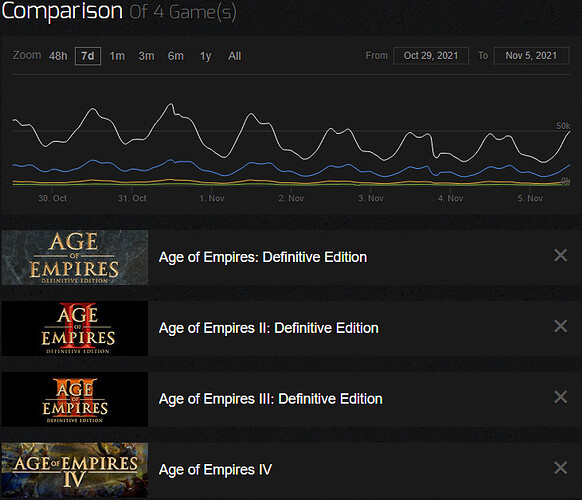 image732×628 120 KB
I think the most certain thing is having 1 and 3 maintaining a relative stable number, while 2 and 4 are going to dispute for the throne. Either way, I hope developers do not abandon the bug-fixing updates for AOE1 and AOE3. And I want a Definitive Edition for Age of Mythology, also.
1 Like
SlenderBadger98 November 5, 2021, 11:27pm #12

April 2021, latest update. Hoping for a new one not so long in time

The next april is far away.

Or worst: not having any updates anymore. What makes me both mad and sad is Microsoft not maintaining some kind of effective communication with their community. I mean, I would appreciate a message like:

“We will work hard on all other games except this one, but don’t worry, for we won’t abandon support, bug addressing, and performance improvements. We don’t guarantee new content being added, though. We’ll probably reserve that for newer games”.

Is it that hard to make such a statement for a big company? Unless they normally forget about the game and only come back to it when it’s filled with either frequent or constant nightmarish bugs… I’d like to think about the first case, but my “social” instincts tell me that 2nd option is more likely to be the truest. Alternatively, we can dream about this one:

“We are letting players around the globe test Age of Empires IV while we work both in expansions (DLC) and improvement updates for Age of Empires: Definitive Edition, and at the same time, finish development of Age of Mythology: Definitive Edition, which will include 4 new campaigns, 6 new civilizations, 44 additional maps and features never seen before in the Extended Edition. There’s more to be revealed in future announcements, and we can’t wait to let you guys know”.

Three years and the armored ele animation glitch no fixed…

I guess they don’t care that they are selling buggy and flawed products, which should not to be very hard to fix.

I know right… A simple announcement would do a lot for this game, a patch twice a year even could breath a lot of life here…

Do you know why so many these games like Grey Goo, Cossacks, C&C remastered died instantly??? BEcause it has no hotkeys… You do most actions with your keyboard in RTS… Forced to click symbols, also I want to play a game, not clicking icons whole time… Starcraft has this in 1998 and is still relatively better than most modern RTS in terms of UI, hotkeys etc… Like how hard it is to implement hotkeys for building buildings, this drivers me crazy. It is so obvious basic thing, it is like to not have waypoints things, or not having hotkeys for unit groups. This is absolutely basic thing to have in any RTS game…

I don’t know what you’re talking about, there are hotkey settings in this game, though the lack of an eraser makes it frustrating since it is required to have one key used for everything that is not of interest.

I you’d like new hotkeys to be added, like this one, I agree. I want more of them too.