Inuit as a minor faction

Many northern maps are barren and inaccurate and could be improved with new fauna like seals and walruses and a minor faction like the Inuit.

Qamutiik (Dogsled) - Light ranged cavalry that boosts the speed of units in formation with it. 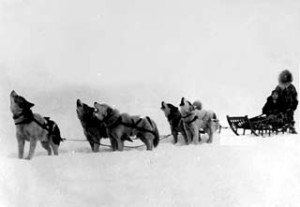 The speed boost to other units would represent the cargo-carrying function of the sled by taking on heavy equipment of nearby units. This would work best as a flat rate boost rather than a percentage since it would have a proportionally greater impact for the slowest units which would benefit formations the most. Stats similar to a dragoon with slightly less speed would be sensible.

Qamutiik could be armed with either a traditional sinew bow or a rifle for ranged combat and melee attacks would be done by the dogs.

Kayak - A boat enabled at the dock with a function somewhere between a fishing boat and canoe. 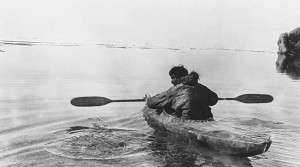 Same gather rate, garrison capacity, and train time as a fishing boat, and same cost, health, and attack as a canoe. Possibly shift some siege attack to ranged and drop the range slightly. That would make them slightly less effective against ships and buildings, but better against land targets near the shore.

Ivory Trade - Ships 6 walruses. 25% of hunted animal yield is collected as coin. This could be limited to large animals only (anything with shrine generation rate of 0.08 or more)
Edit: The gold yield could be limited to hunts under the aura of an Inukshuk to be easier to manage and be compatible with Fur Trading.

Inukshuk - Enables dogsleds to build Inukshuks that function like granaries. Can be built on ice

Imo, the Inuit deserve to be a whole civ on their own. Them and the Haida are the two civs I want to be made into full-fledged civs the most. The Inuit fought Russia as they expanded into the Americas, the Inuit have their own reason to be here.

They have not the unit variety for a whole civ. I can only come up with dogsled, archer and spearman… and canoes for ships

They potentially have a lot of unit variety. For infantry they could have spearmen, harpoon throwers, crossbowmen, archers, women with ulu knives (could also be shock infantry), and some kind of ranger with a rifle. If you include the related Chukchi people, they have heavily armored archers. For cavalry you could have a small fast dogsled with a rider that uses a spear for melee, a medium sized dogsled for light ranged cavalry, and a really big tanky dogsled that could train units like a daimyo. For navy they could have kayaks, umaik, and ships salvaged after getting caught in ice. Salvaged naval guns could even give them artillery.

The main reason holding them back from being a full fledged civ is that dogsleds and igloos make zero sense in maps like Sonora or Borneo.

other reasons would be:
-historic siginificance (since we lack denmark-norway)
-architecture
-bad eco; and bad representation of their RL eco… sure they could have hugh buffs on fishing, but farming, mining and woodcutting are not really adequate.
-a whole lot of annoying comments about ‘Inuit’ vs. ‘Eskimo’ (it doesn not mean ‘fish eater’)
-a long list of better fitting civs to implement

but i would really like to see them as minor settlement

Good call. Agreed that the Inuit would be very appropriate as a minor civ. They were a minor civ in “Empire: Total War” as well.

The eco issue could be somewhat remedied with better maps and resource sources. If you had alternate sources of building materials/wood then you could add things like quarries as a source of “wood” on arctic and desert maps that should have hardly any trees. Inuit could have an infinite soapstone quarry shipment.

As far as “better” civs, obviously there are tons of more advanced nations. However the game’s focus is on the colonization of the New World (despite the attempts to censor it) so Inuit are still a good fit. Denmark would be a more capable civ but it wouldn’t be adding much in terms of gameplay since it would be largely the same as other European countries.

That being said, their reliance on one specific area makes them best suited to just being a minor faction like I suggested here.

i am also not sure when they got access to actual guns? i think that is post colonization, i remember having seen pictures and descriptions from Danish explores in greenland and they never mentioned or took pictures of guns, instead harpoons was the primary weapon of the inuit and even then mostly as a hunting tool.

obviously the story might be a little different in Canada but if Danish explores in the 1800s to early 1900 couldn’t find any then i doubt they had them in big numbers.

The crossbows are mentioned here: History of crossbows - Wikipedia

They were wood and sinew, not metal.

The game’s timeline extends well into the 1800’s so an age 3 ranger/skirmisher with a gun would make sense.

I think it’s until the American Civil War. " The game portrays the European colonization of the Americas, between approximately 1492 and 1876 AD."

Age of Empires III is a real-time strategy video game developed by Microsoft Corporation's Ensemble Studios and published by Microsoft Game Studios. The Mac version was ported over and developed and published by Destineer's MacSoft. The PC version was released on October 18, 2005, in North America and November 4, 2005, in Europe, while the Mac version was released on November 21, 2006, in North America and September 29, 2006, in Europe. An N-Gage version of the game developed by Glu Mobile was re...

If they had firearms after that date (1800), it can be included.

Don’t know if it has enough requirements to be considered civilization, but I would love for it to be in the game in some form.

I think he just misspelled Siberia. Still not quite accurate but it would be more plausible than Serbia.

i gotta be honest i dont really see inuit making as a full faction, in fact id go as far as saying i dont want it at all.

as for minor faction i guess it is possible but northern territories is already such a ■■■■ map, definitely the weakest map in the game and inuit would mean more maps in that area.

Agreed that a full faction wouldn’t work, but they would be a great fit for a minor faction since they are so widely spread. Arctic territories being a ■■■■ map is part of the reason I suggested them in the first place. That map needs to be scrapped and replaced with better options, of which there are many.