I will go over some of the fundamental problems in Ottoman civ design. While I understand gameplay is the priority and not the historicity, you will give me right. I named the title after the most urgent and infuriating problem.

1- Relic Entertainment should constantly be poked until they introduce a formidable horse archer unit into Ottoman Empire. This is u-n-a-c-c-e-p-t-a-b-l-e !!!

I mean I just cannot emphasise enough how significant archery was in Ottoman culture. In 1794, in a field outside London, the Turkish ambassador’s secretary used a Turkish bow and arrow to shoot 415 yards, partially against the wind, and 482 yards with the wind. He said on a plain near Istanbul pillars were located that commemorate distances of 800 yards achieved with Turkish bows and arrows in old times.

Greatest entertainment of the sultans was hunting. 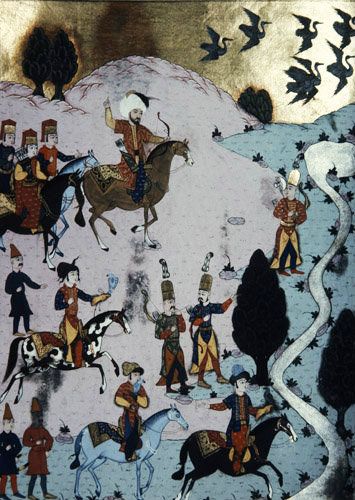 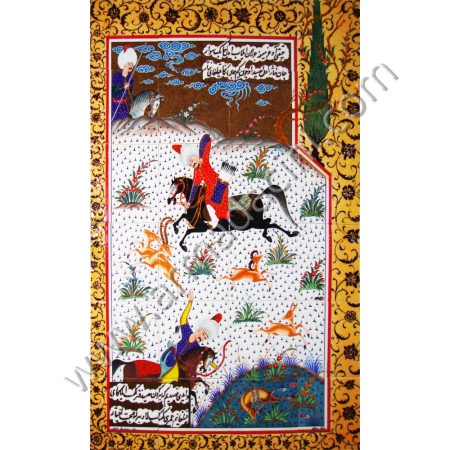 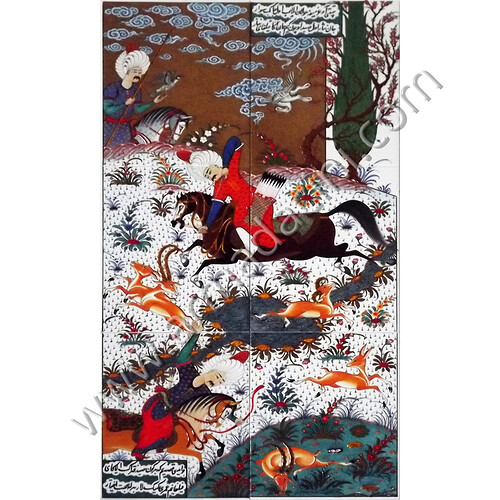 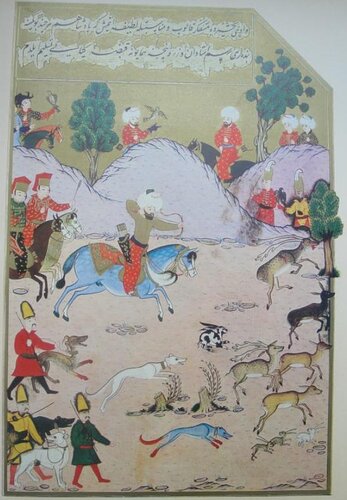 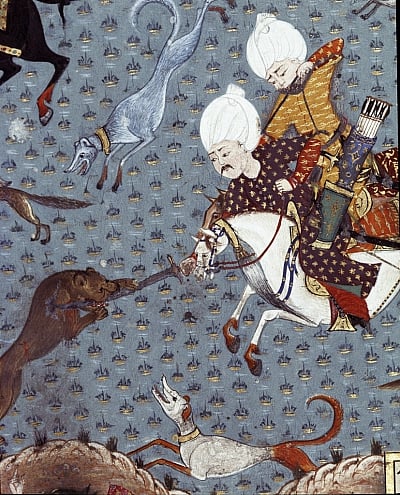 There were many archery training games such as ‘‘kabak’’, Sultan Murat 2 playing the traditional ‘‘kabak’’ game: 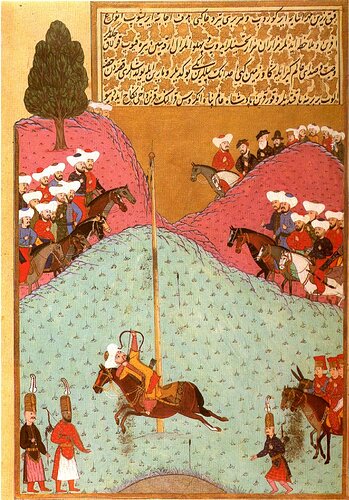 The skill of horse archery basically was considered how talented in war the person was. It was the most valued martial art.This is why in the famous Mehmet 2 the Conqueror portrait while smelling a rose wears a thumb ring. Smelling a rose symbolises how gentle of a soul he has while thumb ring symbolises how warrior he was.
Thumb ring in Asian archery enables the archer to make rapid shots.

From Battle of 2nd Kosova: 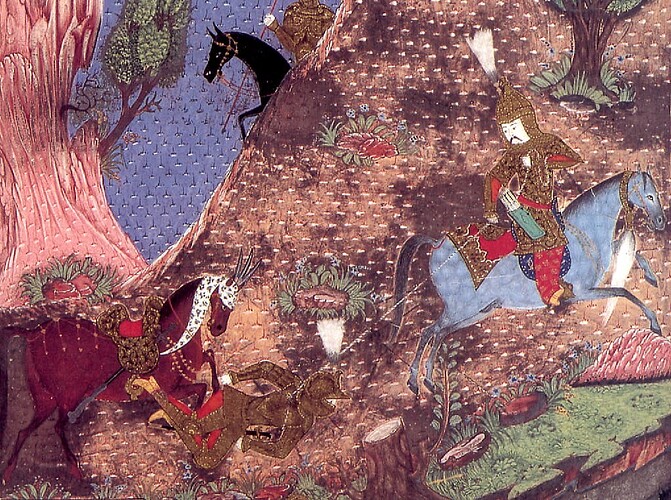 From Crusade of Nicopolis: 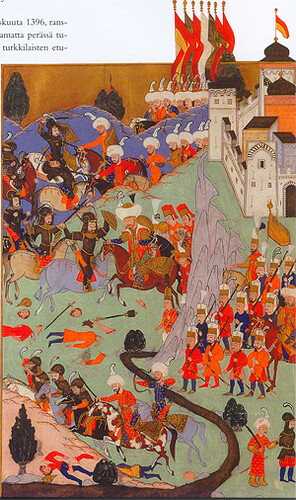 This is from 1526, battle of Mohacs. Notice how all the cavalry have arrow quivers:

An akinji taking out a Hungarian knight in also battle of Mohacs: 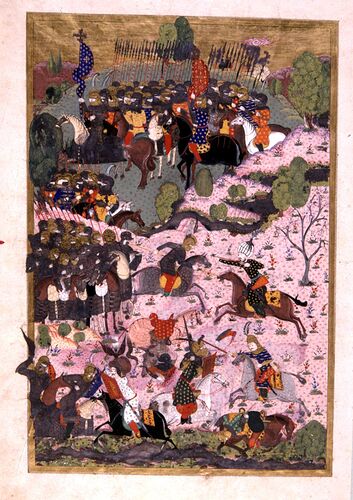 Source says this miniature is from a battle in 1551: 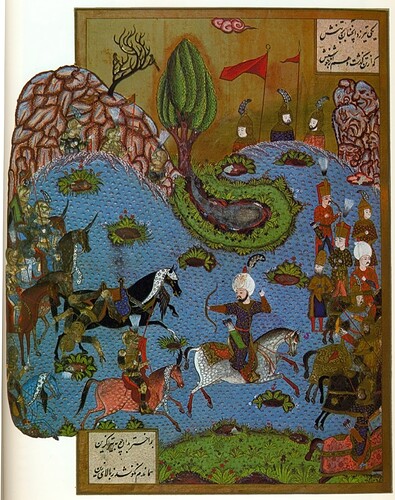 Sipahi depiction from Siege of Vienna: 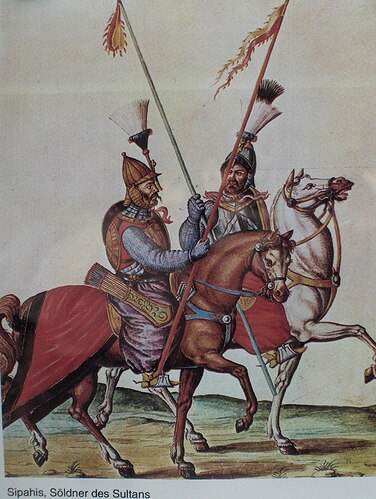 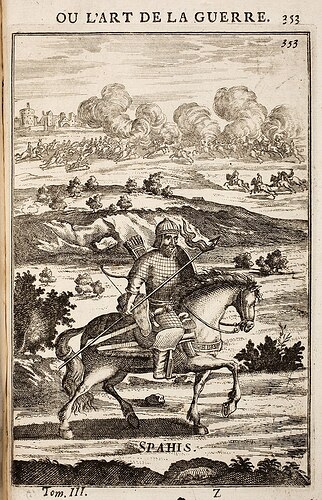 2- Sipahi armor varied from province to province but what is depicted in the game as sipahi is Deli cavalry. Only they wore wings and used leopard/bear/lion pelt as horse harness. However unlike the game they never wore chichek helmet. They wore pelts as headgear.

3- The generic archer of Ottoman civilization in the game is depicted after solaks. It is obvious due to the iconic conic headgear. Solaks were 4 distinct regiments of janissary corps( 60th, 61st, 62nd and 63rd regiments). Their numbers varied between 200 to 400 in the entire Ottoman history. They were exclusively chosen among left handed janissaries. Solak literally means left handed in Turkish. They were a very marginal group in the army to depict the archer class of the Ottomans. I know they look very cool though.

The majority of the archers were azap. Azap literally means bachelor. They were bachelor Turks from villages. They were the lowest tier soldiers of the army and were the most expandable. Majority of the azaps were foot archers but some also had halberds, shields etc. Later on with the instruction of rifles they also had rifle regiments similiar to janissaries.

Janissaries were also elite archers at the beginning. Later on in 15th century they were introduced rifles. If I were to design Ottoman civilization, I would give them two archer choices one being generic archer (modelled after azaps) and the other would be more costly but better janissary. At age 4 janissaries optionally instantly convert to handcannoneers with a single click. So you suddenly have a mass of handcannoneers.

amazing post i congratulate you, you did a amazing job i hope devs will see this too

I am glad you liked it. If you by any chance use reddit, could you post this there in r/aoe4 ? I got all my accounts banned lol.

I totally agree with you.

I really want those horse archers in the game, but if have to choose one i choose unique horseman over unique horse archer because it synergies better with janissaries and the GB. I don’t know why devs removed horse archers. Maybe for balance reason, or unique unit limit?

It is indeed ridiculous that the Ottomans don’t have the Horse Archer even though they should and what’s worse is that the Horse Archer is a unique unit of the Rus which is so unrealistic because the Horse Archer was used by many civilizations of Europe and Asia. If the developers wanted AoE4 to be more historically accurate than the previous games, then the Horse Archer should definitely be a regional unit and so should the Camel Rider and War Elephant.

Sipahi having switch to bow option. That would be the perfect solution. They are already an underwhelming unit.

Rus were inspired by Turko-Mongol invaders and adopted horse archery but Turks(along with Mongols) were the OG. So giving Rus horse archers while leaving out Ottomans, is unacceptable.

Like you said, why the hell would horse archer be a Russian unique unit ? That is the dumbest desicion they could take.

Isn’t that be so OP, countering both spearman and archer.

Sipahi having switch to bow option. That would be the perfect solution. They are already an underwhelming unit.

That would probably not be an option without some major downside while they are switched.

Huh? Horsemen are already one of the strongest units in the game and Sipahi are just straight up better horsemen even if you ignore their activatable ability.

Ok here: once they switch to cav archer they drop the lance for good. Now they cant switch back to melee.

I mean there must be 1000 ways to tweak this. Make them more expensive, make them deal less damage etc.

I mean there must be 1000 ways to tweak this. Make them more expensive, make them deal less damage etc.

Or make them take plus %50 extra damage from ranged attacks, so janissaries no longer feels alone

Dont give them ideas lol.

I would also like to see the Ottomans with horse archers, especially since I played the AoE2 campaign (Manzikert) where they mentioned the history of the Turks before getting the gunpowder.

Personally, I think that at some point the dev will have to resolve the issue of the Horse Archer as a base unit of various civilizations, especially if they plan to create civ. like Poles and Hungary, that due to the Kipchak migration, they historically acquired horse archers, or at least Hungary mainly, also the Russ.

In fact, this is going to happen with the “Iman”:

I suppose its might have been too hard to balance. Still, given how hard this game tries for at least historical relevance if not accuracy and the new civs have been a bit sketch - the hand of FE, I suppose.

In any case, yeah, the Ottos just gotta have a horse archer of some kind. The timarli sipahi were actual horse archers - the anatolian turks decent folks, that is, not the rumeli of the balkans. Giving a horsemen a ranged attack is a bit much, but that not having any kind of ranged cav is like taking turks as a whole out of the ottomans. As is, the civ is the balkan dudes that were mustered by the empire.

@moderators
Can we merge these topics? This is the third Ottoman horse archer related topic.

Shouldn’t otto share them with rus? I thought horse archers were supposed to be shared by multiple civs since they lacked the unique mark a long time ago