In the Age of Salamanders scenario I recently posted, I showed some QoL suggestions, the main one being related to a more optimal way to build walls (see this post to have the full discussion and to test it in your browser).

In the same scenario, there is another QoL suggestion related to wall building, that you can see below (image from the scenario). 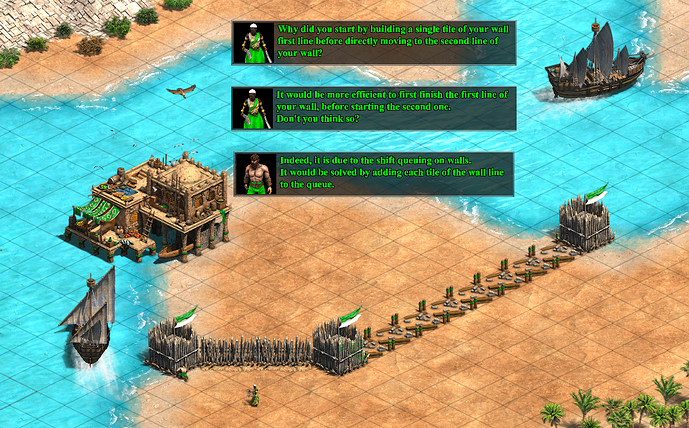 To be more explicit, in the following example, I ask the villager to build a wall of three lines by shift-queuing each line of the wall.

As you can see, the villager will start by building each tile being shift-queued, while ignoring the others (and only build them when his queue is empty).
This is the result after a few seconds:

To solve this problem, we currently need to shift-queue each wall tile manually after placing the wall foundations.

The suggestion to solve this would simply be to add each tile of the wall to the queue, instead of just the first one.

I already saw someone mentioning something similar (possibly on my initial post during the beta, which is not available any more).

9 Likes
QOL request: When shift click building walls with vils, have the entire wall section added to the queue instead of just the starting section
Get rid of "L" shape when creating walls now!
Age of Salamanders - a scenario to test several QoL suggestions
Optimal Walling: JavaScript to test a QoL (Age of Salamanders)
AlightJewel1130 June 5, 2020, 8:10am #2

I had some friends from another RTS lately joining AoE2.
They asked why villagers build walls the way they do…

Yes, I also noticed this. When I build a wall around my base I use a separate villager for every wall section for this reason. But it would be much better if we could just use shift.

(Ignore this, it is for the 20 characters minimum)

This would definitely be a nice feature to make walling and base building less tedious and frustrating. Villagers never finish walls properly because they often build it away from treelines and leave corners of the wall unbuilt unless you babysit them till they do everything. They often go off and build something else and then go farming instead of finishing the wall. Queuing each tile manually isn’t worth it either, 1 misclick and you have to start over.

Walls are the only thing that break the command queue. With this feature it will be easier to build more creative walls and bases without wasting time over-microing.

This is very high priority for my QoL while playing this game!

Its such a time suck to shift click each and every individual wall when trying to wall using two sections. And I know you can just drop your vil at the beginning and let them run wild down the length and its fine. Would just be nice QOL change to have the entire wall section added to the queue when holding shift and dropping a wall.

The devs just implemented it in the anniversary update, great !

“Fixed an issue where holding SHIFT while placing a wall could prevent some wall piece foundations from being added into the command queue.”

but but, now you’re out of a job. did they at least pay you for your work?

but but, now you’re out of a job. did they at least pay you for your work?

No, but technically there are still three remaining QoL suggestions in Age of Salamanders… but two are minor and the last one might be too controversial… so probably indeed out of work on AoE2

so probably indeed out of work on AoE2

You should collect royalties on the work you already did though