Age of Salamanders - a scenario to test several QoL suggestions

During the beta of AoE2 DE, I suggested an algorithm to build walls as straight as possible and costing less stone (i.e. Optimal Walling). I received many positive feedbacks at the time.
This post is unfortunately no longer visible but I rewrote the idea in that post.

However, I thought it would be better if you could experiment it by yourself. Therefore, I created a scenario (called Age of Salamanders) where I let you see and experiment different QoL suggestion ideas like Optimal Walling or the Tile Indicator (What is the Tile Indicator?.. Well, you need to play the scenario to discover it

In this scenario, you follow the path of a brave villager in charge of delivering an important message to a faraway city. On your path, you discover these QoL suggestions and can even experiment with a few of them. Some jokes and Easter Eggs can also be found

You can download Age of Salamanders here (available from the in-game Mods browser).

This is the same scenario as the one initially posted here, but there was an issue when I tried to update it.

Your wall feature on the scenario would be useful and also the shift queue for the walls that is active only on the first wall you position instead of the entire line could be changed as you suggested.
Others are also good although i didn’t quite understand properly the tile colors for different buildings.
How did you manage to make the path indicator on the goose? That was cool and also the auto builders were cool.

It was one of the most popular suggestions in beta forums which received only positive feedback, so developers would please many players by implementing it.
Thankfully the first screenshot about mod shows optimal walls, so if someone does not have time to play this scenario, then he can look at the result from there. 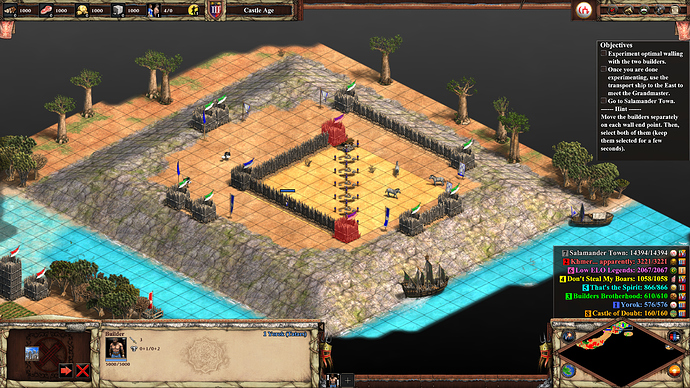 One feature which I think would be controversial is displaying which nearby tiles are reachable from mouse cursor tile. It would make it too easy to avoid holes in walls. Players having holes in their walls provides great surprises and fun in games and so maybe this feature should not be done to preserve skill requirement and surprises.

Hopefully other players and especially developers (@StepS7578) find time to play through this scenario.

Thanks for your comments

Others are also good although i didn’t quite understand properly the tile colors for different buildings.

The idea would be to display sharp tile colors at the location of buildings, water… a bit like what is done with this mod. But, this would only be activated when pressing the Tile indicator and would also display different colors for tiles occupied by buildings, impassable trees and water. This would especially be useful if you want to keep the useless plants, and also to better see the distinction between a water tile and a ground tile.

How did you manage to make the path indicator on the goose? That was cool and also the auto builders were cool.

This is the biggest part of the scenario

Here is the main idea for the bonfires and the goose. Each tile is associated with a trigger which, when activated, checks if there is no bonfire and no building on the corresponding tile. In such a case, the trigger adds a bonfire and activates similar triggers for its neighbor tiles. There are many other details (e.g. to contain the bonfires to a limited region), but that would be a bit long to explain.

For the automatic wall building with the two builders, the basic idea is similar. Yet, the implementation is more complex because I had to take into account the direction of propagation.

These two stuff resulted in already more than 2000 triggers (which explains why I had to limit this to a very small region). Fortunately, I could use this Python project to automatically generate these triggers.

Glad you liked it and thank you for the screenshot

Thankfully the first screenshot about mod shows optimal walls, so if someone does not have time to play this scenario, then he can look at the result from there.

Thanks to this post, I discovered CodePen.
When I will have time, I plan to use it to build two javascript projects to experiment (in any web browser) the exact Optimal Walling and the Tile Indicator ideas I had, without the limitations of the scenario editor.
So, it will be even easier to check these ideas (but playing the scenario still presents additional QoL ideas + people not playing it would miss some Easter Eggs

One feature which I think would be controversial is displaying which nearby tiles are reachable from mouse cursor tile. It would make it too easy to avoid holes in walls. Players having holes in their walls provides great surprises and fun in games and so maybe this feature should not be done to preserve skill requirement and surprises.

You are totally right, this would indeed make it easier to avoid holes in walls, which according to everyone judgement can be a positive or a negative thing.
This is one of the reason of the scenario: letting players experiment by themselves and making their own decision

One argument to support the Tile Indicator is that there are mods which can help reducing the holes issues, but at the cost of aesthetic downgrade (this is subjective of course), see for instance SOTL video (which I used as basis for the wall with holes btw

In fact, for the grid, it was solved with the last patch and would have been one of the suggested QoL of Age of Salamanders if I posted it before the last update

I noticed that; the japanese unfair bigger buildings and the same position Sotl used to show that elevation difference and building’s back can hide tricky holes if you are not careful.

Well seen. There are indeed many scenes that I made to reproduce real games or video scenes from famous AoE2 members (DauT, Viper, Hera, T90, ZeroEmpires, Sotl…)

Thanks for all the work put into this!

Thanks for the notes and good that you liked it

when the captain places the correct wall, one of the walls is not visually joined… does the game have a way to do that 45-degree corner? thought it did

This is just a visual artifact due to the use of triggers to build this wall. I searched for solutions when designing the scenario but did not find a good one.

Everybody reads at a different speed, so I tried to make a trade-off between having enough time to read vs not having to wait too long.
In which cases is the text is way too slow/way too fast ?
Also, it is possible to see again any dialogue using the Chat window.

This is due to the text display time. Should I speed dialogues from Sotl (i.e. the dialogues just before) ?

rather than the right-mouse button, the scrolling action of a gate rotation would be good

waited a long time for tile indicator guy to finish… yeah, it’s an OK idea. I think it would have to be off in multiplayer games, though. Too easy.

Should I speed teh dialogues from the tile indicator guy ?
You seem to share @Yorok0 opinion on this subject.
Maybe only having access to it in single player (standard game and campaigns) and when spectating games could be an idea.
In any case, I will make another javascript program and open a specific discussion about it (should be next week).

I think the fast text was when the master builder is talking, and the slow text is when tile indicator guy is talking. For the goose, for some reason there seemed to be a long delay between the mention of the goose and the release of it. That might have felt even longer to me because after the camera moved to that area, I accidentally moved away again and then was searching for the goose xp

Thanks for the other replies! Re: tile indicator – I should say that it does sound like it was the coolest / most satisfying part to create, which I understand as a hobby programmer, so I don’t mean to dismiss it

Would be interesting to test with the tools you make.

Thanks, I updated the scenario according to your comments.

It is the first time I update a mod (in fact, it is my first submitted mod

When I launch the game, the mod automatically starts its update but never stops (the mod is only 0.19 MB).

Maybe there is something taking more time on AoE2 servers. I will check tomorrow if the problem is still there.
I also updated the pictures on the Mod page, but none of them is currently being displayed.

I tried to re-update the scenario several times (using the Edit this Mod tool from the website), but I always had the same issues: images are not displayed on the main page and the game is not downloading any file.

So, I unlisted the scenario and added the (broken) mention.

I recreated the scenario (from the Submit a Mod website page, but using the exact same method as when trying to update it). Everything works here.

The new version is available here. It seems to work as intended (but the statistics are reset).

@RoomOfTheEvil @Yorok0 @blastonguart If you want to use it, you will have to unsubscribe from the old (broken) mod and to subscribe to the new one.
Sorry for the inconvenience.

@DodoNotDoDo Could you fix this issue of updating a mod, so it would not be necessary to keep old version as broken?

As soon as i can, i will

I think I found the bug that caused this particular one to fail and will get that fix pushed out soon. I’m also looking at making some other changes to help avoid some of these image related issues we keep running into.

Thank you for your help !

I tried to update both the content and the images at the same time.
Is the bug coming from the updated images ?

Yes, it was related to the image changes. I have the other changes to how the images are handled done now. I’m going to do a bit more testing and if it all goes well will publish it tomorrow.

This should have way more people giving it attention, tried posting it on reddit? making a small “trailer” maybe? that may get youtubers like SOTL, T90 or some of the pros to try it

I think, that having one of the popular youtubers play through this scenario would help. People are probably lazy and can’t be bothered to play it, but watching/scrolling through video is much easier/quicker.

Although knowing how much effort Mr. Salamander has already put into developing his main idea (optimal walls), creating a scenario and finally a codepen + community’s positive reception to it, the developers should just add it into the game already without needing him to do even more work.

I like the idea of the trailer.
I will see if I find some time this week-end for this

I never posted anything on Reddit, but I can give it a try (once the trailer is ready).
Are there many people on the AoE2 Reddit forum ?

And indeed, if a popular AoE2 youtuber/streaemer/pro would play it, that would probably put a lot of light on the scenario and the Optimal Walling QoL.
Any advertisement about the scenario and its QoL is welcome.