Tile Indicator: JavaScript to test a QoL (Age of Salamanders)

Other QoL suggestions are also introduced in this scenario, like the Tile Indicator (see video below).

Like for the Optimal Walling, I built a CodePen to quickly test this idea.

For the optimal experience, open it in full page.

Below is an example of how it could look like in the game.

Imagine you want to detect if there is a hole in this wall (configuration from SOTL video). 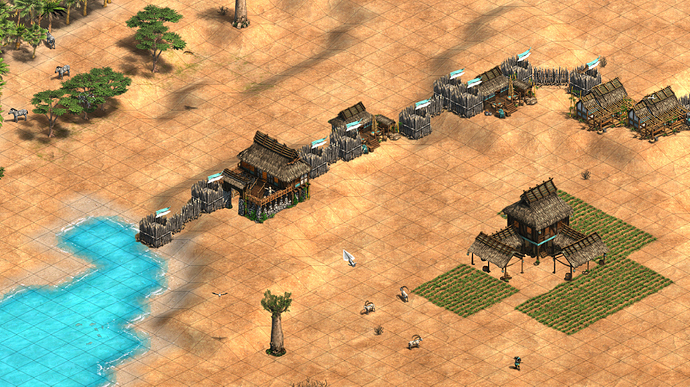 You start by moving your mouse close to the wall and you press a specific hotkey.

On top of that, if the tile beneath the cursor is not occupied, it is colored in red. Then, a Dijkstra algorithm is used to propagate this red color to non-occupied adjacent tiles in the vicinity (limited to a distance of 9 tiles in the images below). The red color added on each of these tiles has an opacity dependent on the distance a unit should walk from the cursor to this tile.

In the image below, we see that there is no hole close to the mouse cursor. 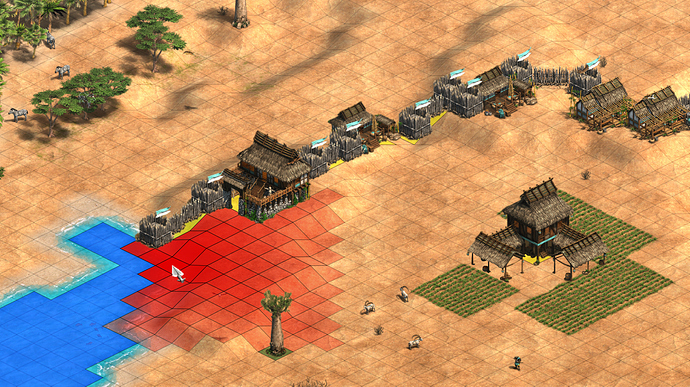 But when we move the cursor a bit to the right, we can see that two holes appear (note that one of them can already be seen with the building yellow tiles). 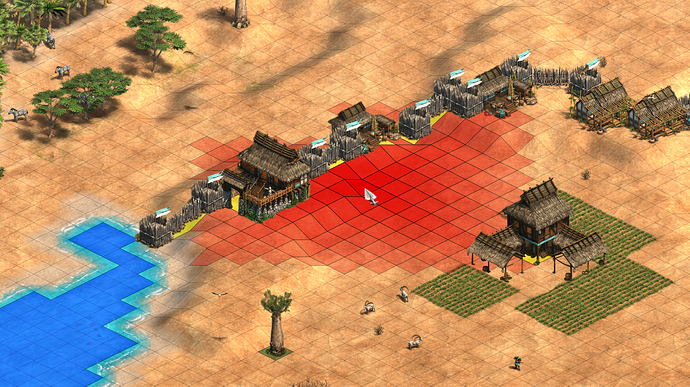 Among all the QoL suggestions of Age of Salamanders, this one will probably be the most controversial because it would make it way easier to avoid holes in walls, which can be a positive or a negative thing depending on your opinion.

Holes in walls are mainly due to the use of a 2D isometric engine for the game and can be partially avoided with appropriate mods (grid mod , small trees, useless plants remover, short walls, simplistic terrain colors with sharp edges …), but at the cost of aesthetic downgrade (this is subjective of course, see SOTL video).
One of the purposes of the Tile Indicator is to keep the beautiful original graphics of AoE2 DE (my subjective opinion

), and to only alter them when needed (by pressing a dedicated hotkey).

Having said that, the Tile Indicator would make it way easier to spot holes than any of these mods. @Yorok0 mentioned in this post that players having holes in their walls provides great surprises and fun in games. In fact, I kind of agree with this statement and I am not sure myself if I would like to have it in multiplayer games

An alternative would be to only have access to it in single player (campaign missions and single player matches) as was recently done with the sheep scouting.
I think it could also be interesting to have access to it when spectating matches (potentially through Capture Age so that T90 could easily check if there are holes in walls when commentating

So, what do you think about it ? As this QoL can be a bit controversial, please be nice in the comments. The purpose of this post is not to impose anything. I made the Age of Salamanders scenario and this CodePen script specifically so that you can test it yourself and make your own opinion

Nice work you did on the codepen for testing this feature

It would be way-way too easy to avoid holes in walls with it though.

This suggestion raises interesting dilemma of whether mods, which make it easier to play (find holes in walls, etc) at cost of aesthetical downgrade should really be allowed in multiplayer.

It is quite a long list of mods. Cubes is even more drastic example. Every time when someone posts screenshot of it being used, I have seen other people expressing disdain towards how it visually looks.

Should it be allowed to gain advantage in gameplay by changing visual appearance of game? This can force other people to also do the same, in order to keep level playing field, even though they dislike visual changes.
For example I don’t like small trees, while pretty much everyone in competitive multiplayer uses them for strong gameplay advantage. I don’t play multiplayer, but if I would, then I would be forced to use them for keeping up although I don’t like them visually.

By thinking about it it seems, that tile indicator would somewhat level the playing field between players who use different mods, which cause visual changes. Although it would still make it too easy to spot holes

Well if it can be activated and deactivated to show the reddish color, i say it still requires a bit of active action to check so there should be no problem putting it. Higher level definitely would have no holes at the start but many interesting holes are also for example, the holes created by chopping too many resources.

Very nice! The CodePen demo is effective at showing what it is in a click or two (even if the visuals make it much easier to see holes than the scenario). Echoing my thoughts from earlier about the optionality / single-player limit, but we’ll leave that to the developers.

Personally. I’m fine with this being a thing.

Sometimes, it’s practically impossible to find the holes (in walls without any tree I mean)

But when we move the cursor a bit to the right, we can see that two holes appear (note that one of them can already be seen with the building yellow tiles).

This image also illustrates the interest of the QoL suggested by @Kuoting in the following post (A QoL suggetion about terrain grid):

A QoL suggetion about terrain grid. (with a picture)

The advantage is we don’t need terrain grid to measure the range of buildings anymore. Besides, indicating the unbuildable terrain can avoid the invisible gaps when we build walls.