"Toggle Extended Tooltips" keeps getting disabled with each new patch, I'm pretty sure

I’ve tried to have “Extended Tooltips” enabled ever since I got AoE2:DE, but instead I’ve had to re-enable it two or three times since I bought it. The latest occurrence was tonight after installing the latest patch. Either it’s coincidence that the patch did it tonight, my first match after getting the patch, or something else keeps disabling it.

Fortunately, I played a single-player game and noticed it happened before playing multiplayer. The issue actually negatively impacted me a week or two back when I played online multiplayer and the extended tooltips had gotten unknowingly turned off by the bug, so I didn’t exactly know which units I should build to counter enemy units. I re-enabled them after that game and played some matches since then and it remembered my choice. Then tonight after the patch, it was reverted.

No matter the cause, I really wish it would remember my choice forever so it doesn’t negatively impact my gameplay and online matches.

1 Like
Extended Tooltips gets disabled every time I restart the game
[BUG] Benefit Info missing from some upgrade icons
Game text notifications disappeared
Age Up Info Missing From Tooltip
davidsnoekdutch January 25, 2020, 7:36am #2

I have the same problem

I noticed yesterday there may be a hotkey for this toggle of “F1”… (for the HD hotkeys preset anyways. DE preset may be different but is likely the same).

I know for a fact that I never hit F1, so that potential cause can be ruled out for me. Are you able to say you also never hit F1 to accidentally turn the extended tooltips off

I’m very sure I never hit F1 like, ever

I am sure, that F1 is supposed to toggle tooltips only in current game, not permanently through changing option value.

Not sure. Seems like that would be a preference it should remember globally, though. I think AoE2, historically, remembers forever your preference for displaying player scores in lower-right (F4), for example

Same issue, was resetting on each new campaign mission

Yeah, for me, I think it reset again… even though I’ve not loaded a new patch

I think it might just be a problem with the game, in general. I was playing online MP last night, and when opponent started attacking me, I went to build units to defend, but the extended tooltips was off again! And I wasn’t positive I knew what would archery units would defend decently against infantry. Luckily, F1 worked. But, still… wasted time, when every second counts.

any help about that ?

I think F1 is the hotkey

any help about that ?

Hello everyone! I’m afraid our Test team has not been able to reproduce this experience, so I was wondering whether this occurred after Wednesday’s update (37650). If it did, can you please include as much information as you can about your experience, such as:

Thanks for the reports, and I look forward to hearing from you!

Thanks, GMEvangelos! Will do, next time I experience it.

After installing the new patch the other day, I checked nearly right away and noticed the setting did not get disabled, thankfully.

I will keep an eye on it in case it happens later on. And if it it does happen, I will try to answer your list of questions as best I can

Hi @GMEvangelos - I had this issue happen again with the latest patch.

To answer your questions:

It happened this most recent time after updating to the latest build: Build 44834.

I normally find out it’s disabled when I hover over units build icons at the military buildings to see which units are good at countering which units. I immediately know the Extended Tooltips are off because no information about this is provided in the tooltip. When this happens, I have to quickly go to the menu settings mid-match and re-enable the Extended Tooltips, as I usually don’t remember with 100% certainty what the hotkey is (i.e., I’d rather be safe than sorry)

Thanks! Please let me know if you have other questions

I had this issue happen again with the latest patch.

Thank you for all of the additional information. I’ve re-opened the investigation with our Test team to see what they can learn.

Assuming they will not see the same behavior, I want to continue trying to narrow down the factors that may be causing this for some and not others. few more questions, to see if the answers can help the team:

Let me know and I’ll get this information passed along, and thank you!

You’re welcome! Here are those details:

A quick update: The game is installed on Steam on my D:\ drive, but I just noticed that my C:\ drive’s “Games” folder and the “Age of Empires 2 DE” sub-folder are set to “Read Only.”

Is that okay? Could that be getting in the way? I didn’t manually set it that way. The game or something would have done that… 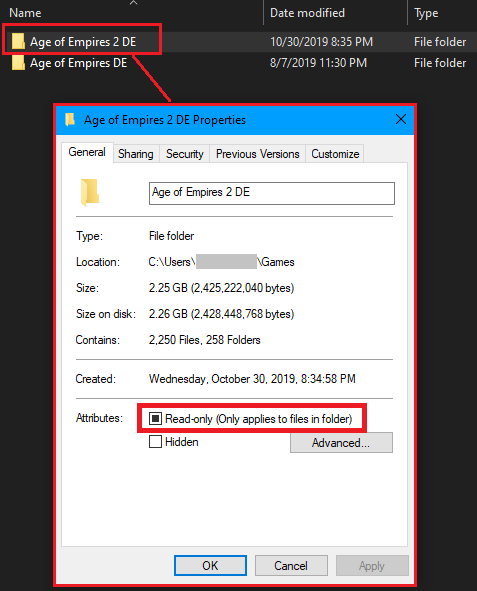 But then if I go into the Security tab of this folder or files within the folder, they say this for all groups and usernames on my system: 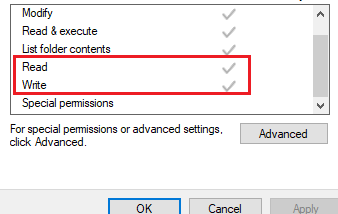 So, it’s a little confusing. Seems contradictory to me to say “Read-only”, but then you dive in and see “Read an Write” permissions allowed…