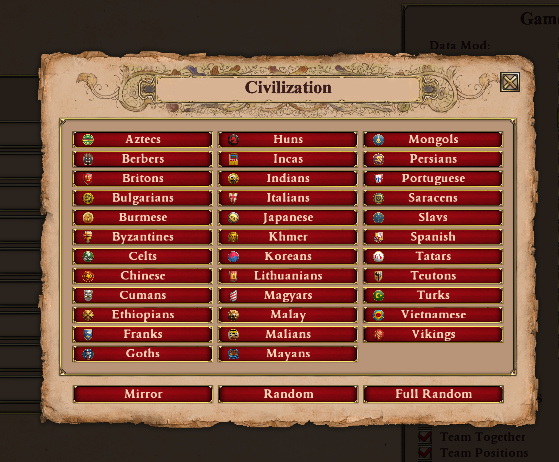 Can we expect to see a new civilization in the anniversary of AoE2 DE to fill the last empty slot, just one more…?

Yes, i have the same obsulsive compulsive disorder symptom!

Haha seems like a good enough reason for a new civ to me!

I would be ok with another Indian civ, maybe one with BE since everyone seems to need that

if we are lucky enough to get one more, I’d think african or Asian makes sense.

Probably not. I also dont feel any need for more civs anymore.

Everytime I open civilizations tab I hate that gap. And I can’t think any civ to fill that.

I wouldn’t mind one more civ (Georgians? Poles? Armenians? Siam/Thai? Bantus? You know, the reasonable nations that people suggest on the many threads of new civs)…
Because that empty space disturbs me every time I pick a civ.

I also dont feel any need for more civs anymore.

Quite a lot of people here and outside of this community would love to see new civs. I would not at all mind to pay for that.

A new expansion would be very exciting.

Isn’t dev already mentioned this that they are not going to add more civ or expansion into AOE2DE?

What part of “definitive edition” don’t you understand

JK, would love another civ too, but dont get your hopes too high. Maybe if AoE4 fails ?

Yep new civ would be cool.

play as GAIA without cheat codes

Campaign: Something to do with Timur/Mongols whatever

Other info: Georgia had to bear the full force of the Muslim and nomadic invaders, and fought many battles against the Seljuks

Did you ever looked to the already existing bonuses?? because a lot already are in game, let’s see:

Esentially the Spanish Inquisition and is way too unreasoanbly strong as team bonus.

Not that bad but then you have already Portuguese and Koreans as well several other civs with discount on military units.

And that’s not counting about those UUs:

Light infantry doesn’t exist in AOE2 as unit type like AOE3 11, and is like weird and odd designed unit.

Not doable for AOE2 modding as far I know and wtf is literally a weaker Teutonic Knight.

before crafting civs you shoud look at what bonuses and UUs concepts are still unused.

Bro it was so cringe seeing all the errors in your responses, I’ll address them later

Yeah, more civs will make game a little wierd maybe and confusing. Already some civs are looking pretty close to existing ones. If new ones are added they shouldn’t be combination of existing ones, make it a lot different. Otherwise new civs won’t have independent identity. Also no change is allowed to game mechanic. This is tough. So new civs coming out will be slow, which is fair, looking at the situation.

Taking a look at existing bonuses it feels like nothing is left.

Tibetans. That will fill the geographical gap between Chinese, Mongols and Indians.

How do you design the civ So that player doesn’t feel Tibetans = Chinese + Mongols + Indians when playing them.

Tibetan - a monk and cavalry civilisation, good herding ability and building hitpoint bonus. Monk and a cavalry unique units. Poor archer and navy but good infantry and monastery and trade bonuses (as a Silk Road civilisation).

Taking a look at existing bonuses it feels like nothing is left.

Hello everyone. I’m making this thread to hear your ideas of civ bonuses or technologies that are unique in some way for hypothetical new civs or civs redesigns, that slightly changes the mechanics of the game giving a unique identity or playstyle to the civ. The idea is to be realistic in what could be implemented like cuman feudal town centers or khmer farms, and to not go too far with the uniqueness. I say this because I’ve seen proposals for morale/healing auras and hybrid land-water units …

I think that it is set in stone that there are no more civilizations, that will be added - thus DEFINITIVE edition.
However, that missing last spot in the table is so irritating…
If they only change its overlay to 5 columns, people wouldn’t even think about new civilizations