Before Mexico was announced my prediction was for an Australian civilisation, and though we didn’t get it I’m still quietly confident it’s being worked on in the background at (Australian studio) Tantalus… It matches the bill for a US/Mexico style post colonial nation, there’s been a bunch of Australian flora present in the scenario editor from DE day one, and in my proposal I show how the Australian theme could leverage underused game mechanics that already exist (like other DLC nations have done in the past). The elephant in the room is that Australia never actually revolted or fully split from the UK, so it’s a little grey whether it would be acceptable as an ‘Empire’ for an Age of Empires game, but, whatever. Also the time period issue, but again, the US and Mexico set the precedent.

Anyway for fun here’s my proposal for how the Australian team could work:

Australia as a nation will focus on economy more than anything else. It will be a powerful boom civilisation with a strong midgame that falls off militarily in the lategame - rather like the dutch. Australia, like the US and Mexico, will field powerful and unique outlaws in its army, but its main army will be cavalry focused, like the Lakota. Also like the Lakota and other Native Civilisations, the Australians will be able to choose one of five options per age, that become more powerful the later they are chosen, but these will be named as States (like the US) rather than leaders.

Personally as a Europe main I’m not super interested in adding more extremely complex and varied game mechanics for new unique civs, so my proposal is pretty simple. Australia would use European mechanics in general, with an explorer instead of a US style general or African/Native/Asian hero.

Like the Native American nations from AOE3 TWC the Australian states are available in each age, but their bonuses become more powerful the later they are chosen.

I’m not going to invent an entire card deck but here are some ideas:

The focus of my Australian civ is economy and their army is not meant to be extremely powerful, but I think the team I’ve designed here would be very good as an ally in treaty late game, as they could ship a lot of resources to their allies.

Going for an early or mid game artillery rush would be possible by taking Queensland State early, and hopefully that would be a viable way to play as this team.

Going for a convict boom would be an extremely fast way to build an economy at the start of the game, but doing this leaves you at tremendous risk of a snowballing raid where your convicts turn against you to fight with the invaders!

Stations are like factories or banks but require a lot of space to build and a lot of investment to start up, in the form of livestock. Defending them will be important but also tricky.

I haven’t included any Indigenous tech/units/states because I don’t really have any authority to comment or contribute to that, and I assume Tantalus and Forgotten Empires would do like they did with the DE and contact people who would be able to provide guidance on what would be culturally sensitive to include or not. At a guess I suppose you could do as in the original AOE3 and just include various native settlements on Australian themed maps. Otherwise “x tribe support” cards might make sense, and might provide unique units that would be thereafter trainable at barracks/stables.

Hopefully overall it’s balanced and would be fun to play as and against. The nation is not as flexible as the US or Mexico, but the order of state research hopefully injects enough interest to keep it fresh.

I know that Australia is very late in the timeline to be considered for AoE3’s world, but I think it could fit in; If the focus remains firmly on very early Australian colonial history and doesn’t go past the 1850s. As an anecdote, some of the best fun I had in o.g. AoE3 when I was young was building custom scenarios that were huge desert maps of gold fields with tents and mines scattered about, inspired by what I learnt at school about the Victorian gold rush. I visited a colonial reenactment museum around the same time and was so amazed to see the units and architecture from AoE in real life! And while the game had nothing to do with Australia,
definitely inspired me to learn more about my country’s history.

Anyway, it’s my hunch that the devs are secretly working on something like this and have been since the DE was first started… If I have to guess why it’s taking so long I’d say they needed to lay the base groundwork and expectations with the US and Mexico, and the cultural sensitivity stuff might also take a long time to sort out.

Let me know what you think!

(Alternatively a possibly better idea would be to replace the US revolution options for the Brits, French, and Dutch into Australia. That way we remove the weird US civ vs British US revolution civ matchups and also keep the “AOE3 is colonial age ONLY” people happy

- though obviously Australia never revolted from Britain neither did Canada)

Just for fun a quick set of ideas for a revolution version of Australia instead: it would be a Canadian/South African style (non)revolution where settlers become better at gathering instead of becoming revolutionaries.

Interesting concept.
But honestly, I don’t know how I would feel about it as a playable civ in AoE III, from a historical standpoint.
Yes, US and Mexico are opening new doors, but colonization of these lands took place much earlier. Additionally and with all respect for Australia’s natives- there was much more historical and cultural background since day0 (especially when we’re talking about warfare and general focus of AoE series), even before the symbolic date of 1492.

I’ve never studied very early days of Australia’s history, but when it comes to strategy games in my mind I don’t take it into account in anything before WW1. Mayflower reached America 168 years before Brit colonial ships did that in Australia.
1788 is veeery close to the edge of AoE III’s timeframe (1800, 1850-ish?), and we already have Brits in game

Not saying it shouldn’t be included or it wouldn’t be fun, but I don’t feel as strongly about it as I do about some other potential candidates that existed (under different names) often many centuries before 1492.
Not that historical importance or lifespan should be a deciding factor, but something should.

Names of civs are a bit of a mess in AoE games in general, in AoE3 they are names of ethnic groups, and as I’ve mentioned already in this context it’s hard to justify ‘Australians’ in anything before 1901. Just my two cents.

WW1 was the first war of independent Australia. so yeah i agree, i dont think the faction makes a lot of sense.

its a lot of effort put into this idea, but by the end of the day at some point you have to put the foot down and being a dominion even by the end of the games timeframe (1876) makes it a pretty big no in my opinion.

I have to say to be completely honest as well I’m more of a fan of O.G AoE3’s aesthetic and was a litle annoyed with the Asian, US, and the African civs as each was added with how they sort of bend and maybe break the original tone and time period of the game. These thoughts are just my ideas of what I think will happen, but my ideal situation would probably be more like the addition of a few Australian themed maps and an Australian revolution option for the Brits, Dutch, and maybe French - with my ideas for that outlined in my reply above. Adding Australia as a revolution I think fits nicely with the revolution civs being basically on the tail end of the time period.

I have one final revision I wanted to post just because I’ve been thinking about this a lot and have been really enjoying playing Mexico:

They would not be as powerful as South Africa in a long game due to their lack of military upgrades, but would have a little more staying power than the Canadians due to their focus on economic upgrades.

I stuck to the OG DE style 9 card revolution deck, which after playing a lot of Mexico seems fairly limited, but at least makes it balanced when compared to the Canadian and South African 9 card decks.

Settlers become ‘Stockmen’ on revolution, which would be pretty much the same as the Bear Flag/California Californios but without the lasso.

I think that’s pretty much the best version I can come up with. There’s a dozen other things you could emphasise with early Australian colonial history to change the civ’s niche, but I think the most important things are convicts as cheap settlers and a lackluster military. The number of convicts you get and what they cost (if anything) would be where you’d have to focus any balancing. I er on the side of letting them be very numerous and free, considering that revolutions are a pretty late game function and a player who revolts needs to be able to be able to get on and remain on the attack asap if they want to win.

Anyway that’s all I wanted to put down. I can finally let it go…

where I brainstormed some ideas for an Australian architecture set and I decided to do a concept illustration of how it might look like for the discovery/commerce/industrial house: 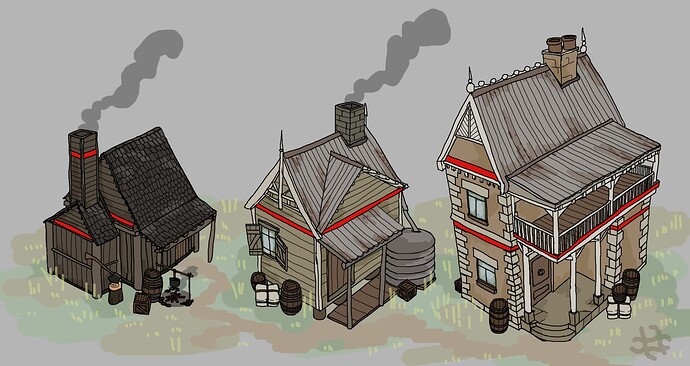 I get the feeling that a custom architecture set is just too much work for the DE devs to do considering they’ve avoided it for pretty much every new civ (except the incans) but it’s fun to speculate and imagine : )

its a good way to represent that they are convicts