We all know it and we all had to face with it. It completely ruins ours game experience and there is nothing we can do about it? Or can we?

Here is our most famous example. We all know him. There are like 5 posts already on this forum related to him.
He had to be reported many many times (Including by me) not only there on forum but of course by official support report website. There is nothing to investigate - one look into his playercard and everything is clear - Time to recognize if such a player should be banned - approximately 10 seconds)

We all have to realize that this guy is only tip of the iceberg. And more than 90% of such a cancer-players are hidden to us (partly thanks to epic-in game feature hide match history

And here we come into my POINT.

This guy who should be considered to be a king of all cheaters/crashers was still not banned yet.
Yes even after so many reports in last 3 days this guy keeps playing and ruining other players games

If this is the way how you face to this worst behaviour RELIC than thats it from me.

Btw.
I watched his replay with only defeat in his last ± 30 matches and he dropped 10 mins before game ends and replay ends here as well.
(Probably game-crashing did not work as intended in this one game)

After another 8hours he managed to ruin another 5 games btw.

It’s useless to type cover his name. I want to say that everyone in this forum knows who he is.just show his name.

Nope
Post will be deleted If a didnt cover his name.
But yeah everybody knows him.

what’s his name actually? So one can drop the game directly when playing against him. At least he wouldn’t ruin games and time by dropping if things don’t go as HE wishes and he can have a taste of his own medicine.

No result happened on my very first 1v1, at the very bottom of the game, right after I had trashed his army and was at his base with rams.

The timing made me think he cheesed it somehow, but I didn’t know what caused a “No result”, and whether that could be cheesed, so…

I didn’t see many people complaining about it though, so I thought that it probably wasn’t something that could be cheesed…

Doubt it was the same player, but still pretty demotivating to have a win taken away on your first game lol

My God this is just embarrassing.

This just comnfirmed me my personal opinion.

Relic employees are slown clowns who does not even care about community … (in Roblox of course! - in Roblox)

In last 10 hours this guy ruined another 5 games.

Its still only one drop in the ocean.

I expect this threat to continue for another x-months.

Just want to show you all their incompetence in most easiest and most important task to do.

Still not solved btw. - He ruined another ± 10 games since my last post.
He reached high CELO already so all TOP100 tg players BEWARE OF THIS GUY and try to avoid him by alt+f4 OR better solution is to switch into single player when match is found and u see his name. 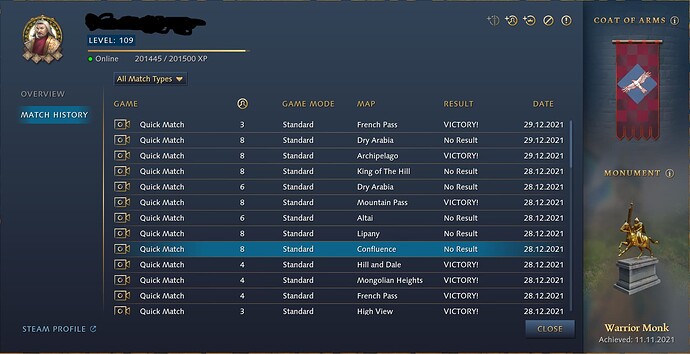 its just and only shame on your account and you show to all of us you dont give a sh*** about fair and healtry gameplay.

King of all cheaters not baned even after month? Oh I wonder how long is this gonna take in others cases.

Now we should all asked ourself why are people so triggered and numbers are dropping when even the most crucial aspect of every game - a FAIR GAME is not accomplished in this game.

I know why he is unbanned. You painted his name.

I would claim he is most-reported player from entire game tbh. - But he is not baned yet

just joke.
But let us see his name. no idea why u painted it.
I would like to know and altf4 before game starts.

But let us see his name. no idea why u painted it.
I would like to know and altf4 before game starts.

It’s against the Code of Conduct to call out player by their name.

I expect this threat to continue for another x-months.

Well it is good we can see a chat history in replay right?

So this is how our story about this guy conntinue

Do you realy expect them to ban playing player’s?

They are the one who keep the game alive.

We should encourage player’s to keep the comotion up, so that normal play become exceptionnel.

Many games ban playing players because their toxic behavior negatively affects the playerbase and losing a single other player is equal to losing a bad player, and the toxic player has the effect of causing more than one player to leave the game over time.