Hi, is there a problem on my side ? I keep reading patch notes after patch notes describing bug fixes but very little changed. People get random DCs (game just freezes, my internet connection is fine and it cannot reconnect) and lobby often bugs. I know the topic has been discussed many times, but just want to make sure it is not just me after all the fixes. Unfortunately I prefer team games over 1v1.

I see this thread much less frequently. So they do fix bugs, but some still are in the game, so you still have DC once in a while.

Well then there might also be a problem on my side if less people have these issues.

I experienced tons of drops from TG today after the update. 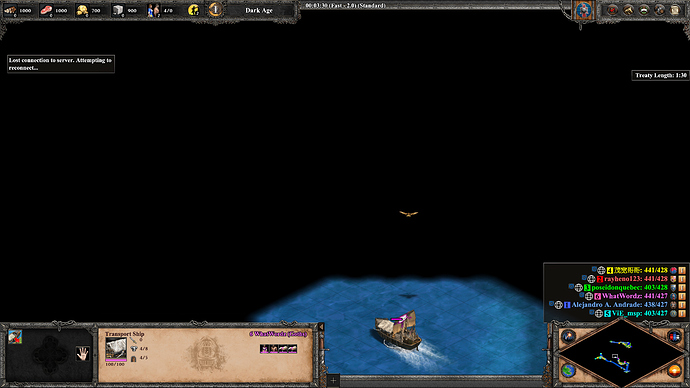 DEVS take note THIS ISN’T A BRAZIL SERVER ISSUE. THIS IS A PING > 200 ISSUE any servers where I have yellow (I’m in South East Asia) I will disconnect. Sometimes I’m lucky in west EU, UK and WESTUS but I’d say 8/10 I’ll disconnect. WHICH IS NOT GREAT ODDS.

No official response so far.

Yesterday, after the patch, there were DCs in 3 out of 5 multiplayer games I played.

Today, I wake up, get my laptop, start a 4v4 game, see that one of my allies drops after 5 minutes, close the game, uninstall the game. It’s not worth the frustration it generates inside me.

Be happy that it happened after 5 minutes, and not after 30minutes

Same problem. Ping looks fine. But every SINGLE game i get disconnected from the server multiple times. Honestly, I’m not even exaggerating. This game has become literally unplayable for me. Not even expecting an answser these days anymore… so frustrating especially because I used to love this game

In the release notes of the latest patch, it now says:

Disconnect and Reconnect Fix: We have major stability fixes in the works for two reported issues:

When implemented, players should be able to reconnect to their games if still within the game within 60 seconds. Following thorough testing, we hope to have this implemented in an upcoming release window.

The description of the issue is very general, so I hope it will fix the issue with random disconnects in team games. The disconnects seem to happen even if there is no disruption in the internet connection, so I’m not sure.

I was watching Jordan’s stream yesterday and he was trying to play a 4v4 with 7 other pros (who all have good PCs). They tried 3 or 4 times but each time the game failed to start or someone dropped in the first minute. In the end they just gave up and played 1v1s.
I hope the devs realise how frequent disconnects are and actually fix it, not just put a vague note in the patch notes about it.

I totally agree, it takes away much of the fun of playing team games if most of the games result in someone dropping. It’s too much wasted time after a few games. I’ve seen it happen in ranked and unranked, both in top-level and lower level team games. One player dropping basically spoils the game for 7 other players.

It became amusing when in a 4v4 game both sides had one player dropped at the start. I thought, OK then, we’ll do 3v3. But one opponent didn’t seem to realize and resigned instantly. Then all of them resigned. 11

It’s the same for me. When we play team games there are almost always one drop from every two matches. Never did I successfully get a reconnect.

It has not decreased in frequency. There still seems to be a 50/50 chance that at least one person will disconnect and drop from the game.

I have made multiple threads about this but still no response from devs. I was disheartened to read that they made it seem like a very specific issue to Brazil servers in the notes. It is not. It happens on other servers too.

They made a point in the patch notes that they will listen to feedback…well we have been making multiple threads on this issue for weeks…please listen!!!

5/6 of my games yesterday suffered a DC from someone. playing 2v2 we won a lot by DC.

Yeah, the problem wasn’t just players being sent to the brazil server. It’s a problem with whatever mechanism assigns players to servers. I believe the system is pleased when, for instance, 7 out of 8 players are playing in an appropriate server. But it only takes 1 player to drop and make the game unbalanced and not fun to play. For instance, I recently took part in a game hosted in the european servers where all of us were european except for a chinese player, who dropped after a few minutes.

Tl;dr It’s nice that I’m not being sent to brazil servers, but the problems persist, and drops take place at the same rate they did before

I really dont know why this issue isnt treated with more urgency. They have even refused to add it to the known issues list for weeks, after receiving countless reports.

Why not add it to the issues?
Why not let us know they are actively working on it?
Why keep us in the dark and force people to just get frustrated and leave the game entirely? (A lot of people have done so already because of the lack of acknowledgement of the issue)