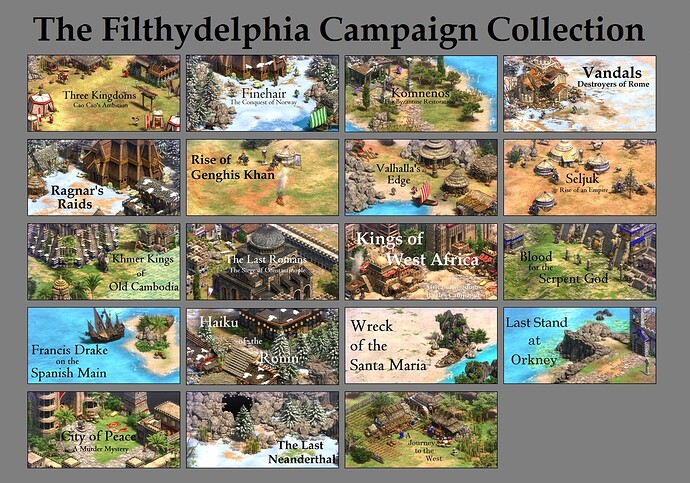 Hey guys, wanted to make a place to discuss my custom campaigns and answer any questions you have. The last thread only showcased a fraction of my scenarios so it’s time to make a new one.

You can check out each of my custom scenarios organized by genre in the links below or by searching for “PhillySouljah” via the in-game mod manager/website mod page.

Hope you enjoy them!

First of all, a huge thank you for all these wonderful quality campaigns. I hope there will be more campaigns to come. I also played some of your scenarios in AoE DE as well.

I have a several questions for you Philly,

This might sound like AMA but yea a huge fan of your campaigns. Thank you once again and wishing you prosperity.

Thanks for your support, Soldeo! I don’t mind answering some questions!

What are your plans after the Last Neanderthal, more campaigns or perhaps go to creating some custom campaigns in AoE 3 DE too if you play that?

To be honest, I may take a bit of a break. I do have a backlog of other games I’d like to play and should also focus on other parts of my pretty busy life.

Which is the hardest campaign/scenario did you develop among the currently available ones?

I’m told all the time that Bayinnaung 5, Ivaylo 3, and Raid on Babylon (from Age of Empires: Definitive Edition) are extremely hard scenarios, but there’s definitely ways to win them – once you figure it out, I’m sure most people can beat them consistently.

To be honest, though, I’ve never been a big proponent of making scenarios really hard, especially since many of my custom scenarios are on the longer side and it would really suck to invest 2-4 hours in playing a scenario only to lose! For that reason, I like to make them relatively manageable and focus on giving the player an experience of getting stronger over the course of the scenario.

Which is your favorite to play among your campaign collection?

Valhalla’s Edge. I think Age of Empires is at its best with small economies, small numbers of units, and a strong sense of exploration and danger – where great rewards or dangers could lie through the next patch of black and every life feels significant. I know Valhalla’s Edge is not my most popular scenario but it gives me what I come to Age of Empires for. It’s probably the only scenario I’ve made that I go back to and play for fun. Somehow, it feels fresh and different every time I play it.

How do you find the time to create the campaigns besides your daily work and life?

Really good organization/scheduling and the support of my loving wife!

What is your favorite civ?

I don’t really have a favorite civ, but I’ll say the Sicilians since they are really cool/different and I played a role in their design.

Are you excited for the Lords of the West DLC? Speaking of the two new civs, are you part of their campaign designs?

I made The Hautevilles, the Sicilians campaign.

Lastly what are your plans this 2021?

I want to focus on my new job and continuing to help make great games!

Ooh, I hadn’t heard of The Last Neanderthal before. Intriguing!

Thanks for sharing your creations, and nice to read the impromptu Q&A

Hi,phillysouljah，greeting!hopIng you to remake more campaign on the hd version,and I want to ask you who make the briton campaign? basse? or others?
We hope another new dlc in central Asia and southern Asia,please arrange it in the nearly future,
best wishes and be holy fans of you forever.

Thank you for the great answers Philly. I can’t wait to play as Sicilians and the new campaigns this coming Jan 26. All the best to your endeavors.

Could we see more screenshots from the Hauteville campaign?

Thanks, cly0806. The Britons’ Edward Longshanks campaign was designed by HockeySam18, who also created the Tamerlane, Tariq, and Suryavarman campaigns as well as all but the 3rd scenario from Dracula and Battles scenarios such as York and Kurikara.

We hope the children of dying sun or any other scenarioes in the hd version can play no bugs in DE,and hope the second dlc of asia topic ,maybe next year or this year sometimes?Hope to see it.

Even though it’s been dated by civ choices (since it came out before Rise of Rajas), I’d really love to see “Rise of the Khmer” in DE. It was such a cool scenario, and though I’ve liked “Khmer: Kings of Old Cambodia”, “Rise of the Khmer” still feels special to me, and It’d be awesome if more people got to play this piece of HD modding history.

Looking forward to the Sicilian campaign as well!

I had subscribed to The Last Neanderthal via the website as instructed here the other day; but when I checked the game tonight, it didn’t show up in my Mods list?

I had to manually search for it and subscribe to it via the in-game Mod Manager:

Just wanted to mention. I don’t know if that’s an AoE2:DE bug or not