Ondol Influence: Units within the influence radius of a house has their HP increased by 15% that lingers for 5 seconds outside the area. Houses also generate 1 food stockpile each time villager deliver food to a mill. This stockpile can be traded in the Town Center for extra food. Each house has a max capacity of 50 food stockpile.

Architecture should be similar to the chinese, but with their own flare, being more Stone-based. (Sorta like the difference between English and HRE, while they start similar-ish they are still a bit different from each other) Naval units would be Junk-style for the arrow ships, but they have their own Unique War-Junk and Cannon-ship.

Language progression: This is kinda difficult as the Korean language starts off rather obscure. But it could start off as the “Old Korean” which was typical of the Silla kingdom, which later becomes Middle Korean, which was the most commonly spoken Korean and was around the time of their invention of the Hangul script. And then in the imperial age more into Modern Korean without the English loanwords.

Bulguksa: Is considered a masterpiece of the golden age of Buddhist art in the Silla Kingdom. It has among the earliest woodblock prints in the world.

Beopjusa Pagoda: The temple complex itself was said to house around 3000 Buddhist monks during the Goryeo period. It also became the chosen place of Bruce Lee as the original setting for the Movie Game of Death which never got finished due to his early death. The reason why he chose was due to the pagoda’s five-floor construction, to represent the 5 different martial arts of Bruce Lee. Sadly this got edited out when they released the movie postpartum.

Gwanghwamun Gate: Served as the Main Gate to Geongbokgung Palace, the most important royal palace during the Joseon Dynasty. But was left as ruins for 250 years after the japanese invasion during the 16th century

Jinju Castle: was originally built as a mud castle, but got rebuilt with stones against constant attacks from sea marauders. During the Japanese invasion early 16th century, They won 3 great victories holding the castle in the first siege of Jinju, despite overwhelming odds, 5000 Koreans vs 30000 Japanese, from the first invasion attempts of Korea, but the next year following the second siege of Jinju 70,000 militia fought to the last man standing, the following defeat lead to the massacre of the entire population of Jinju. It is today the most visited Castle in Korea.

Kyujanggak Royal Library: was the royal library of the Joseon Dynasty, it functioned as a key repository for korean historical records and is still a center of research.

Jongmyo Shrine: Today a UNESCO world heritage site, it is the oldest royal Confucian shrine preserved. When it was built it was thought to be one of the longest buildings in Asia, it is a shrine dedicated to the forefathers of the Joseon Dynasty.

Wonder: Hwangnyongsa Temple: Was an enormous 9-story tall structure made with interlocking wood using no iron nails. It was built during the Silla period under the patronage of the Silla royal family who was supportive of the buddhist religion despite resistance from nobles. It played a key role according to myths in converting all the nobles over to buddhism after a series of miracles happened when the king’s secretary, a staunch Buddhist got used as a scapegoat and was sentanced to death.

Hwacha functions similar as the chinese Nest of Bees, however with a longer range and wider area of effect that does equal damage within the area. The Damage counts as regular Bow damage. Doing less damage against heavy armor, but bonus damage against anything light armored targets. Fires for a much longer duration than the Nest of Bees.

Pnaokseon is an early cannon ship that does the same damage as War Junks, however, benefits from gunpowder upgrades in imperial. It also has a Hwacha that it can use to provide cover for units close to the shore, or deal area damage against a big blob of arrow ships.

The Koreans are a very interesting nation, a very defensive one at that too, which is to no surprise having been under constant attack from the sea by pirates and Japanese, and by the Chinese and Mongols in the north.

They somehow manage to find a delicate balance between the two powers, Japan and China, and had a prolonged peace and enjoyed huge cultural growth and technological advancement.

While for some reason the Koreans did not fully embrace the power of matchlock as the Japanese. They fully mastered the art of Cannons and naval artillery. Their cannons Chongtong fired an unusual round for its time, instead of round shaped projectiles, they would fire more of a giant arrow-like projectile with fin stabilization for much higher accuracy, penetrative power, and range.

And their range of armament and weapons is so wide and diverse that it’s really hard to try even representing a small portion of it for the game without doing justification. But just like their AoE2 counterpart, I wanted these to be focused on the Defensive, being rewarded by strong gunpowder technology in the late game.

The Koreans were also early adopters of food-preservation technology such as primitive Refrigerators called Seokbinggo (Stone-Ice-House). Since the Koreans do not have any econ-bonuses, I wanted to represent their food preservation ability in form of Supplies. Similar to the Rus Golden gate function, only here they would trade supplies solely for Food and then later stages, Food and a small amount of gold. This allowed the Koreans to “stock up” on supplies in case of being pushed into a hard-pressed siege. Their Houses play an important role in the supply storage as well as providing protection in form of the Ondol influence. Boosting non-siege unit health by 15%.

Their naval strength comes with their unique naval ships as well as gunpowder technology upgrades. Allowing the Korean ships to be quite dominative in the seas but with weakness in mobility.I also wanted to give attention to the little, but a significant invention of the Koreans, the first Hand-pistol, the Se-Chongtong, which was so widely popular that most civilians in the frontier had one. Easy to use handheld “Miniature cannon” firing an arrow-like projectile that would penetrate most but the heaviest of armor. This can be researched as a unique landmark technology in the imperial age to provide Korean villagers ability to fight against a small group of raiders.

If you liked reading through this, I also made one for the Khmer Empire and the Japanese

Some proposed flags of the Koreans include the following: 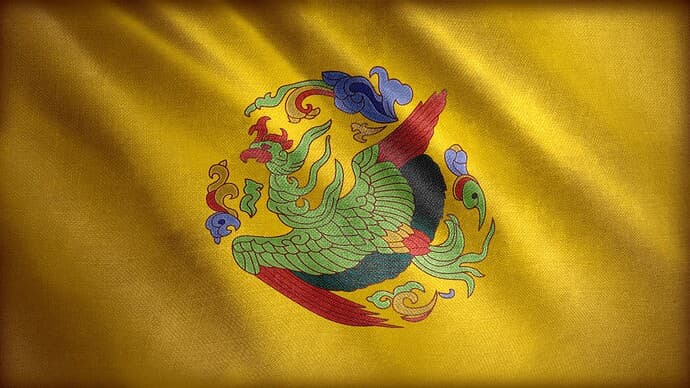 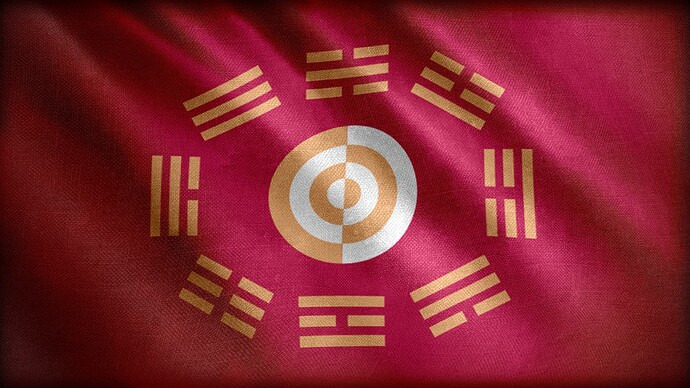 But at least with either flags, the Koreans would still represent both, the Goryeo and Joseon because the Koreans in AoE4, like the AoE2 version, would be representing medieval Korea. I do, however, prefer the first image to be the flag of the Koreans because it looks so unique.