Greetings! I wish to introduce you to a little-known, but very fascinating and much neglected Kingdom, that Lasted for more than 1500 years, into the early 19th century and pretty much disappeared almost without a trace. These guys dominated the sea in both Piracy and Trade. Spreading the Hindu, Muslim, and Buddhist religions throughout the Southeast Asian.
If you have any critiques or suggestions Please do comment below! I’d love to hear your opinions! 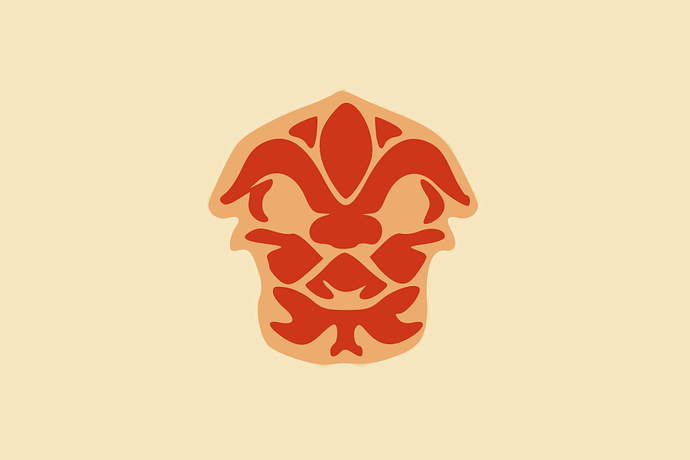 Marauders of the Sea: When enemies ship, Towers, or Keeps catches fire, it has a 25% chance of being converted. Units un-garrisoning from Transport Ship, Battering Rams, and Defensive buildings gain 33% more attack speed for 15 seconds.

Kalan (150S 150W): Functions as Monastery that can be upgraded giving it more features.

Architecture: this is a little difficult. The final Dai Viet conquest of the Champa thoroughly destroyed everything. And anything that remained got even further destroyed by the heavy bombing of the Vietnam war. However, they would most likely fall within the architecture that the Khmer used. Where most buildings were made of wood, but the important sites, especially such as their temples were made of Red Brick, contra to the Khmer grey sandstone structures. They would incorporate many Hindu elements, that eventually took on the Khmer style and later got more influence by Muslim and Buddhist elements. However, the Champa really varied in many different architectural styles depending on region as they were never really a Single-Kingdom. Each Kingdom developed its own flare to the Cham styles.
But here was a common trend:
My Son / Dong Duong - style architecture dates somewhere 7th-10th century. Khuong My - first half of the 10th Century.
Tra Kieu - second half of the 10th Century.
Chanh Lo - end of 10th century to mid 11th century. And Thap Mam - 11th to 14th century.

Naval units would mostly consist of large war boats powered by oars and ships designed of typical Malay design, having junk sails and long ship hulls lined with oars. Although there is very little info on them. But it is said that Chinese ship designs were based on the Indo-Malay part of the world. (It is said that the iconic Junk sails stem from this region, and are rumored to be introduced by the Cham people, who learned it from the Malay)

Language progression: The Cham language is a difficult one. As the Champa people were pretty much stomped out, many fled over to Cambodia, However, the Chinese did record the Cham language pretty well making a dictionary over the Cham words used in that era.
Currently, the Cham language that is closely related to the one spoken in the Champa kingdoms, is the one found in the Cham minority in Vietnam, and those in Cambodia, as well as a minor population in Indonesia.
The language is related to Indonesian and Philippine languages.
The Champa would start off with Old Cham during the Dark and Feudal age, and develop into the early form of Coastal Cham in the castle and imperial age.
There is an issue where it’s hard to tell which of the Cham languages to use as Eastern and Western Cham have diverged so much after the fall of the Champa. That the Cambodian cham is no longer mutually intelligible with the Vietnamese cham. But my best guess is to try to find out which of these are closest to old cham. 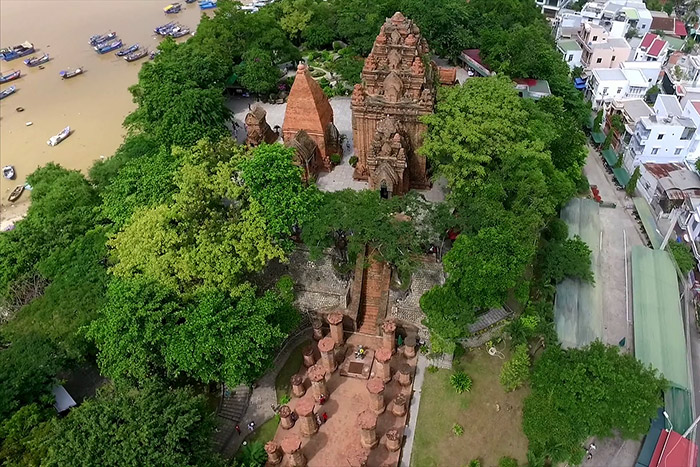 Named after a Godess of local origin, who is said to have created the Earth, Eaglewood, and Rice. The temple was built during the Hindu period of the Champa. Po Nagar is now used by Vietnamese Buddhists who have dressed the Goddess statue in Buddhist robes**.** 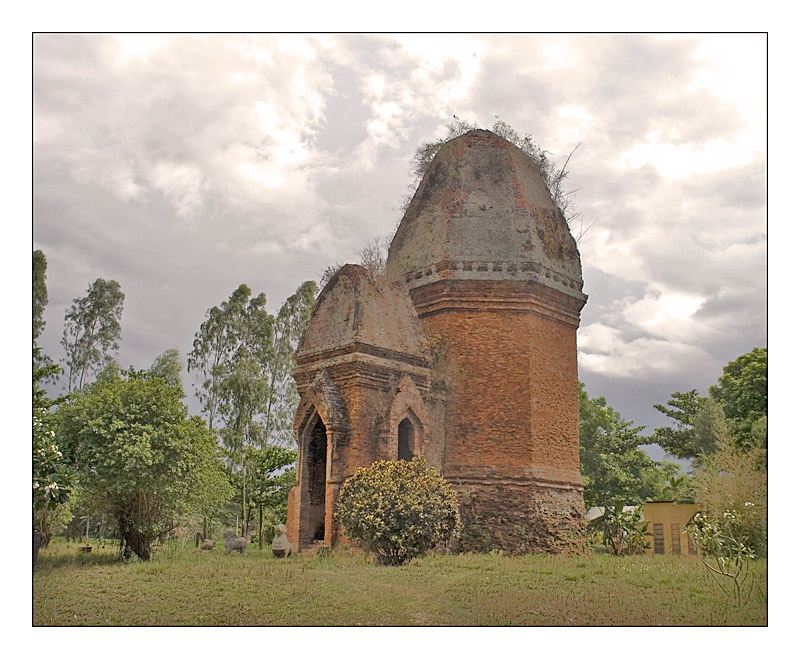 A unique structure among the Champa monuments for its octagonal plan. Possibly inspired by the shape of Lingas. It once houses the Linga Paramshvara (The Supreme Lord). Today a tree has taken root on top of the structure. 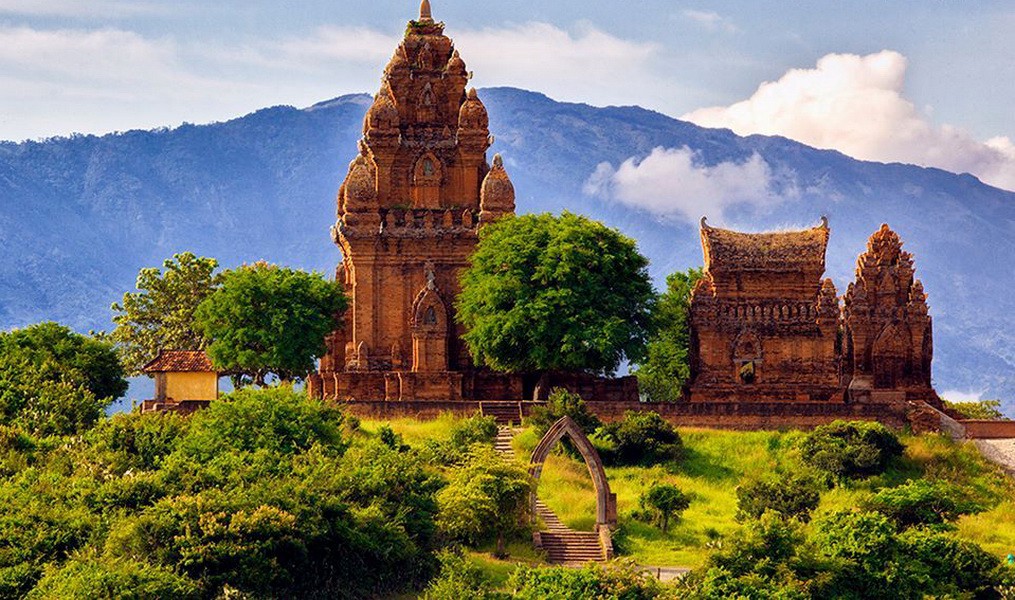 These are among the last towers the Cham built, dating to around the 13-14th century. According to legend, named after a wise king Po Klong Garai (Dragon king of J’rai people). Started life as a lowly cowherd, but became king of Champa by destiny, ruling wisely and for the good of the people. When the Khmer invaded his kingdom, he challenged them to settle the matter peacefully in a tower-building contest. The king prevailed, and the invaders returned home. After his death, he became a god and protector of the people on earth. It is said that the tower he built in the contest with the Khmer is the tower today known by his name. 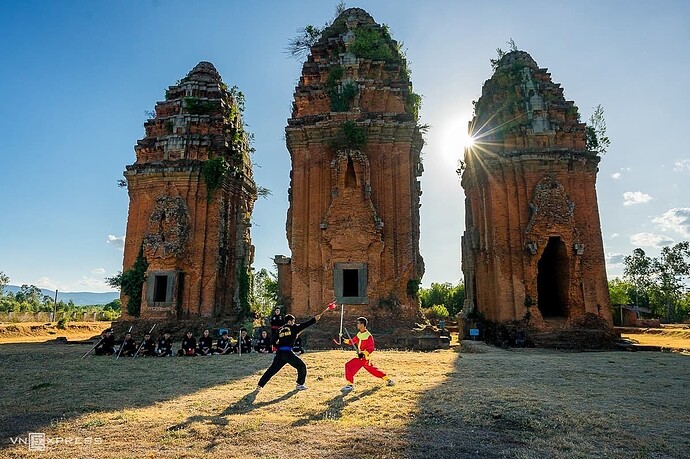 bilde1200×800 164 KB
Tallest brick structures in all of southeast Asia. It was suggested to be an important ritual site for the Chams, decorated richly in a variety of animal, vegetal, and, human forms. It was also heavily influenced by the heavy stonework of the Khmer, which had regular contact with the Cham. It is possible the site was a Tantric Buddhist place. 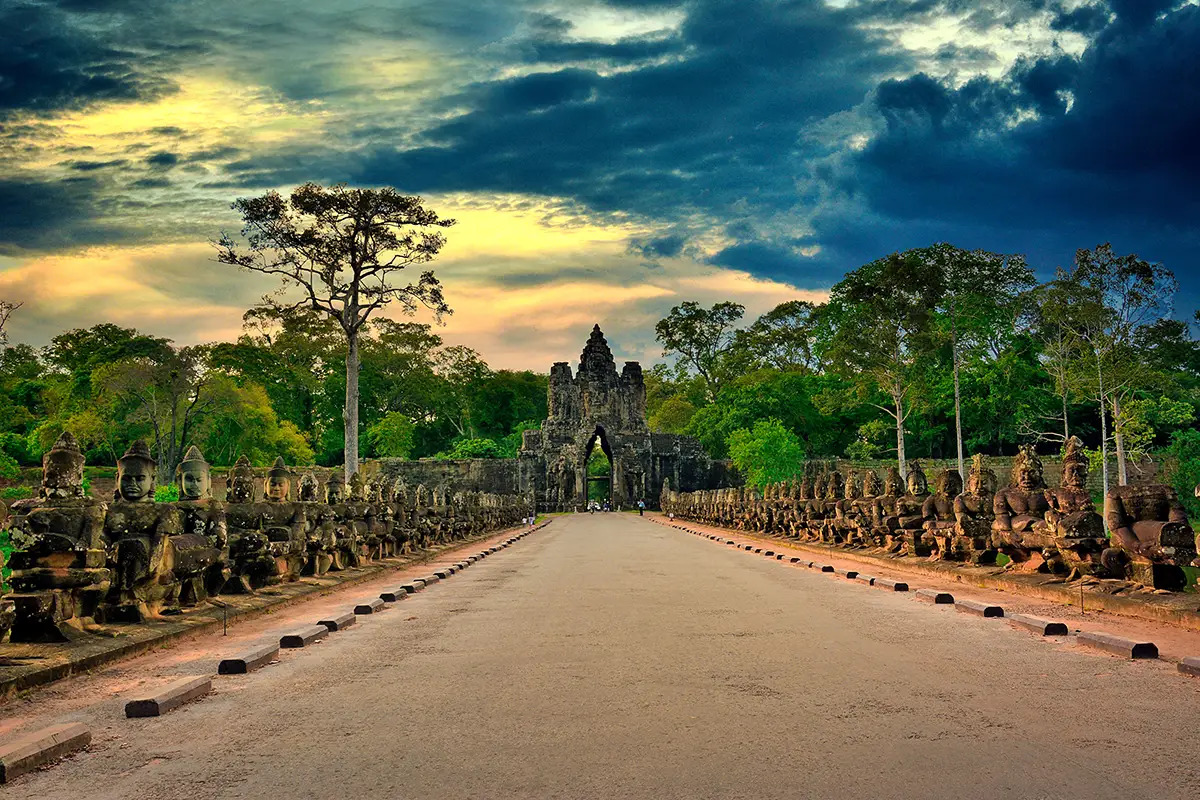 Served as the main HQ on the border between the Champa and the northern neighbors’ Dai Viet, it was built to defend the northern border region. It also where many times a battlefield where the Cham fought bravely and won several victories over the Dai Viet armies. It was positioned near the Gianh River and the Con River, allowing the Champa army to quickly build up forces around the citadel area. 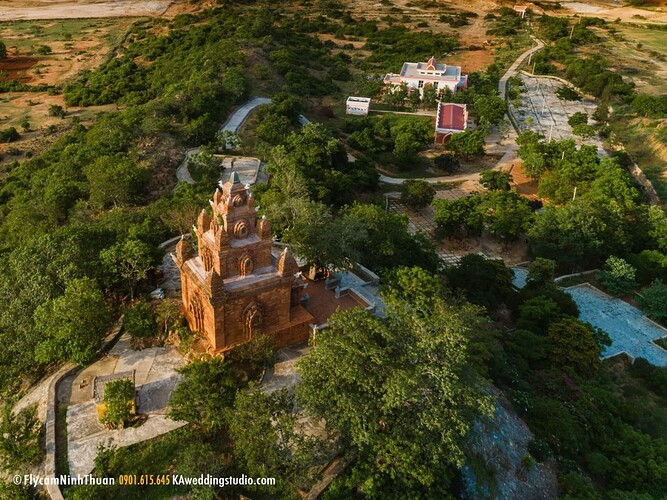 Named after the King Po Rome, who built dams and canals to nurture agriculture. During his reign, Champa traded with all its neighboring countries, including the western countries of France and Portugal. He also succeeded to subdue the Hindu and Muslim factions of the Cham people. Forcing peace between the Hindu, Muslim, and Buddhist Chams.

Wonder: My Son: No, not my son even though he is a wonder in itself, but Mỹ Sơn, is a cluster of abandoned and partially ruined Hindu temples. It served as the capital religious site for the Champa kingdoms, where religious ceremonies for Kings of the ruling dynasties of Champa, as well as a burial place for Cham royalty and national heroes. At its height, it encompassed over 70 temples, and numerous steles bearing historically important inscriptions in Sanskrit and Cham. A large majority of this was sadly destroyed by American bombing after a single week of the Vietnam War. 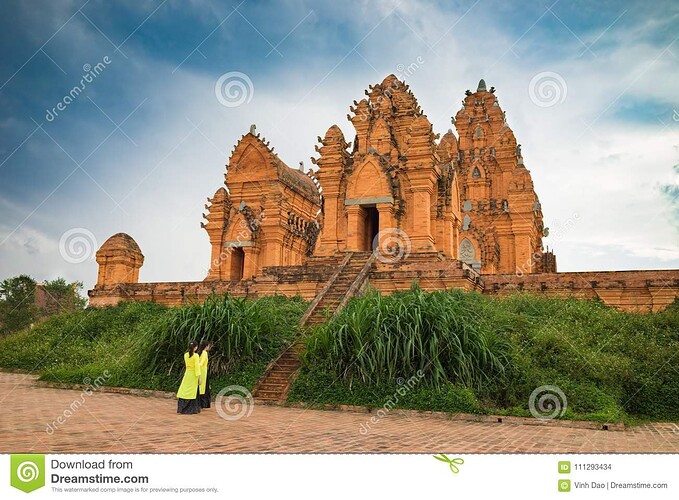 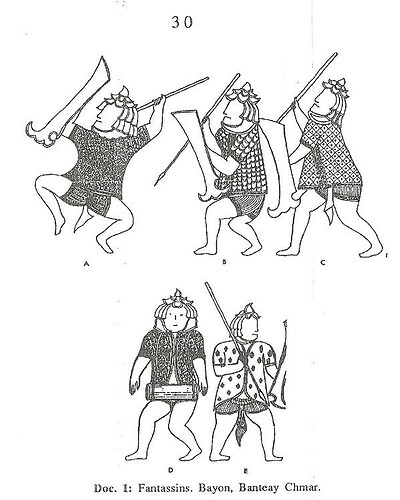 Haluwbilau serves as the Marines for the Champa. Strong as a spearman in Melee, but with a bonus against Archers instead of Cavalry, and with a Landmark upgrade, also able to engage in short-range combat. These units serve a role similar to the Skirmisher from AoE2.

bilde832×599 83.7 KB
Credit: https://www.artstation.com/artwork/o2xedk
(he has a collection of pictures taken from mural reliefs and illustrations of the champa warriors and elephants)

Battle Elephants are units that excel at melee combat, Although with considerably fewer hitpoints than their Dheli counterparts. They serve as a form of Melee version of a Mangonel, or a much more expensive and tankier Landsknecht.
But due to lack of armor is very vulnerable against anti-cavalry units, such as spears and camels. As well as against range damage.

The Champa is a maritime nation famous for dominating the sea of Champa (south china sea) for more than a millennia. They excelled at piracy as well as naval warfare until the Vietnamese overtook them by implementing gunpowder early in their navy, something the Champa and many of the southeast Asian nations failed to do. I wanted to try to represent this piracy and try to differentiate them a little from the Mongol raid bonus. Where instead of gaining resources, they have a small chance of capturing the ships and defensive buildings outright. While the Marauders of the Sea might seem a bit awkward to function in the early game, it is there to boost their fighting power when doing early coastal raids, as well as make early battering rams a little more useful. They do get access to an upgrade that removes the need of garrisoning the units, as I feel giving it early would make them much too strong. Their Kalan kinda functions like the Abbasid landmark where you build it and can upgrade it further. These buildings were frequent and many throughout the Champa kingdoms and are pretty much the only remains of the Champa today and played a very important role for the Champa people. So making them a building with some flexible utility and serving as a defensive garrison.

The Champa Kingdom is a fascinating empire that lasted for one and a half millennia, from early 200-400AD all the way to 1832, Surviving as broken up city-states after the Dai Viet had thoroughly crushed their once-great empire and burned it to the very ground. Eventually, 2 City-states remained one of them, Pandurangga, being able to hold out all the way to the early 19th century. Before finally being annexed by the Dai Viet, only 50 years later, the French would turn Vietnam into a colony, imposing the same fate on the Dai Viet.

The eerie thing is that the fate of Champa was strangely similar to the faith of the South Vietnamese during the Vietnam war. Also, the border between the Champa and Dai Viet was also, the same border as the north and south Vietnam.

The Champa were excellent builders, making their structures out of brick but without mortar, instead of using a vegetable resin to bind the bricks together.
The Cham were also very multicultural, being a vast trading nation, they were among the first to get Indianized, eventually, Buddhism got introduced and then Islam through Arabic merchants, primarily Hindu, they also had a sizable amount of Muslims and Buddhists, and yet they unified most of their time and was able to work together to expand the empire.

I’d like to give a special thanks to Cyberguy49 for once again helping me check through and help me fine adjust the concept build.

If you enjoyed reading this, check out my other Civilization designs:

Southeast Asia:
The Thai
The Khmer

East Asia:
The Koreans
The Japanese

Europe:
The Norse Vikings
The Scottish

Great write up! Such a pity about the structures being bombed during the Vietnam war.