Here is my civilization concept of the Scottish, would love to hear your input on this! If there is anything you think is to weak, or to strong, or just overall your opinion on the matter. 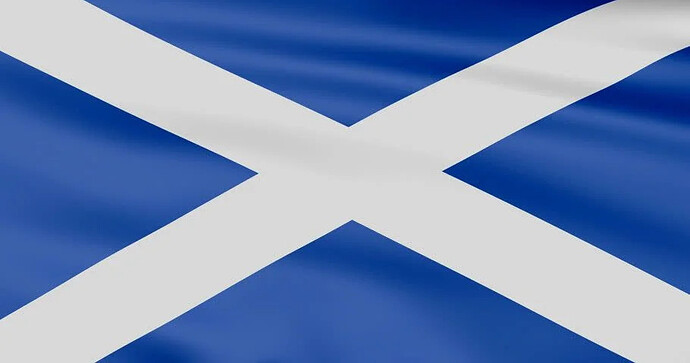 Teulu (eng: Warbands) : Infantry when grouped together for a period of time become stronger. (+1 damage) This comes into effect after being in a group of a minimum of 10 infantry units after 120 seconds.

Nemeton (I, 75S): A Unique building that spawns Deers every 90 seconds when 5 or more trees are within its influence zone and a Druid is garrisoned.

Druid (I, 50F 50W): This unit has an Aura when activated, causes the Druid to stand still, Aura gets deactivated when the druid moves and boosts nearby resources. Berries will provide +2 Wood, Wild animals will be attracted toward the druid. Druids can also heal units. When Garrisoned in Nemeton’s they will spawn Deer’s every 90 seconds. Druids can also Herd sheep.

Architecture Scottish Architecture changes quite a bit over time. They used a lot of Vernacular architecture utilizing local building materials, often making houses with Turf walls and clay, and cruck constructed houses with heavy reliance on Stone. As the town developed it became more sophisticated. By the end of the period, some were stone-built with slate roofs and tiles. And over time they started getting more influence from the English and continental Europe.So in the Dark Ages, they would stand out quite a bit, with houses mostly reminiscence of typical Celtic design, in the Feudal age, they get more Norse influence into it, becoming more wooden. But in the Castle and towards the Imperial age, they would fall more in line with how the English and French styles of houses are.

Naval units Their Birlinn would be unique to their look, Norse Longship design (Lodya) but with a flat end in the back instead of being mirrored. Their Warships would be more the style of the Galleys and Carracks of the English. (after all, it was the Scots who built the entire English war fleet that came to make Britain into its world-expanding power!)

Language progression: The Scottish language has a long history.In the Dark age, they would start off speaking a later form of Old Irish, which turns into Scottish Gaelic in the Feudal age, in the Castle Age the language starts turning into a more Anglic-Scottish, adding a lot of Scandinavian and Anglian into the Scottish language. Imperial Age is when they start speaking the more Modern Scottish that we are familiar with, due to the influence of Dutch and French (as French became the Noble-speaking language and many loanwords were taken from Dutch) which start turning the Scottish language into what we all know Mountain Dwelling dwarves speak today into the 17th century. 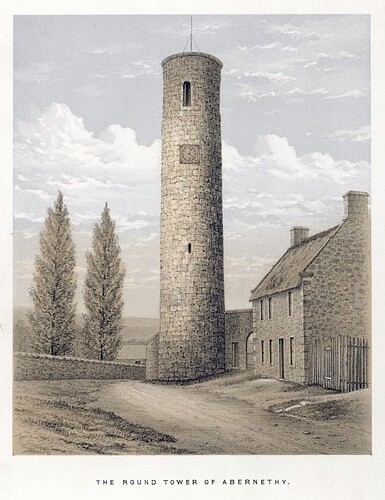 This Is one of the two surviving Irish-style round towers that survive today in Scotland. Fixed to the outside base of the tower is a Pictish Stone. 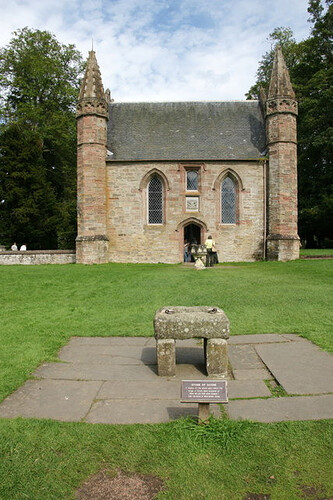 I would argue and say that this might have been the most influential Stone to ever exist. And has had a core role in shaping the world we know today. As silly as it sounds. However, this stone is also known as the Stone of Destiny, in England is referred to as the Coronation Stone. This oblong block of red Sandstone that looks like something out of Minecraft has been used for centuries in the Coronation of monarchs in Scotland, later taken as a spoil of war by King Edward who fitted it into a wooden chair known as King Edward’s Chair. On which most subsequent English and British sovereigns have been crowned. It wasn’t before 1996 that the British government decided to return the stone back to Scotland. It is still used today as a Coronation stone of the British monarchy. 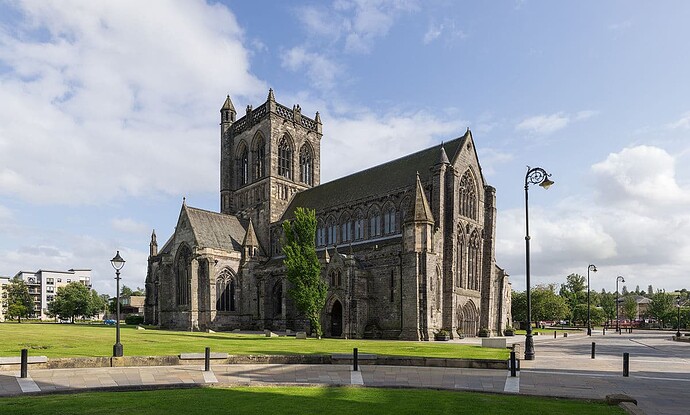 is today a parish church of the Church of Scotland with a lot of history. It is believed that Saint Mirin, founded a community on the site in the 7th century. King Edvard the I of England had it burned down, it was later rebuilt in the 14th century. It is believed that William Wallace who was born nearby Elderslie, was educated in the abbey for some time as a boy. Marjorie Bruce, daughter of Robert I of Scotland known as Robert the Bruce. Was taken care of by the Abbey after falling off a horse heavily pregnant with the later King Robert the II, being born by Cesarean section without anesthesia (this didn’t exist at the time). 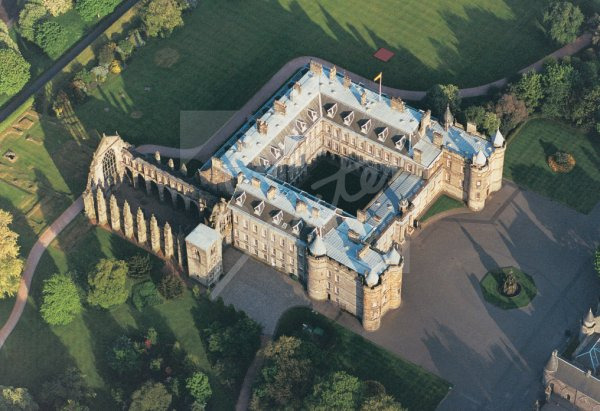 Is today the official residence of the British monarch in Scotland. Queen Elizabeth II spends one week in the residence at the beginning of each summer, where she carries out a range of official engagements and ceremonies. The name derives either from a legendary vision of the cross witnessed by David I, or a relic of the True Cross known as the Holy Rood or Black Rood. Which belonged to St. Margaret. David’s mother.

It became an important administrative center. A Papal legate was received here in 1177, a council of nobles met to discuss the ransom for the captive king, Willian the Lion, and Robert the Bruce held a parliament at the abbey. 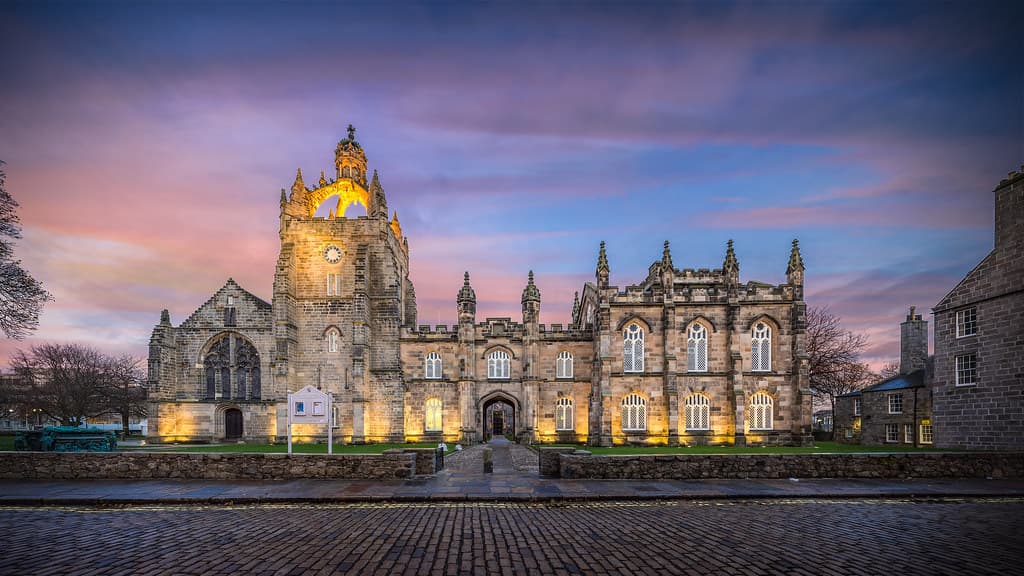 founded in 1495, by the Collegium Regium Abredonense (University of Aberdeen), is one of the oldest college campuses today. It was the Bishop of Aberdeen, William Elphinstone, who petitioned Pope Alexander VI on behalf of King James IV, to create the facility to Cure the Ignorance he had witnessed within the North. Following the reformation, it was purged of its Roman Catholic staff but remained resistant to change in its methods. It also supported the Jacobite cause and following their defeat got largely purged of their academics and officials. 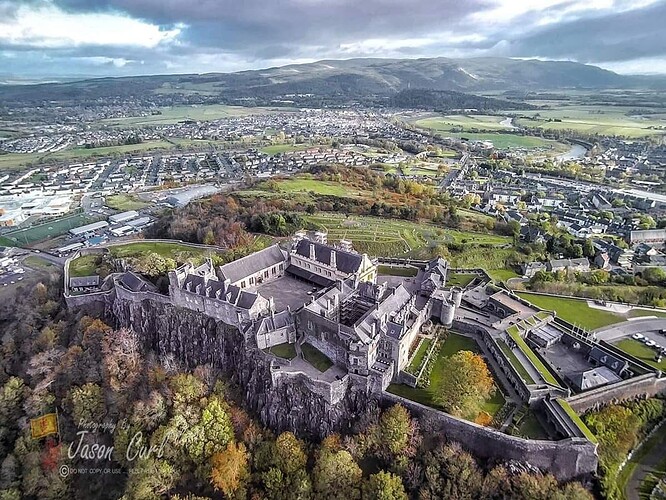 One of the largest and most important castles in Scotland, both historically and architecturally. The castle served as a residence for many Scottish royalties, being very much a Palace as well as a fortress. Several Scottish King and Queens have been crowned at Stirling. Withstanding at least eight dedicated sieges, as well as several more during the wars of Scottish independence. 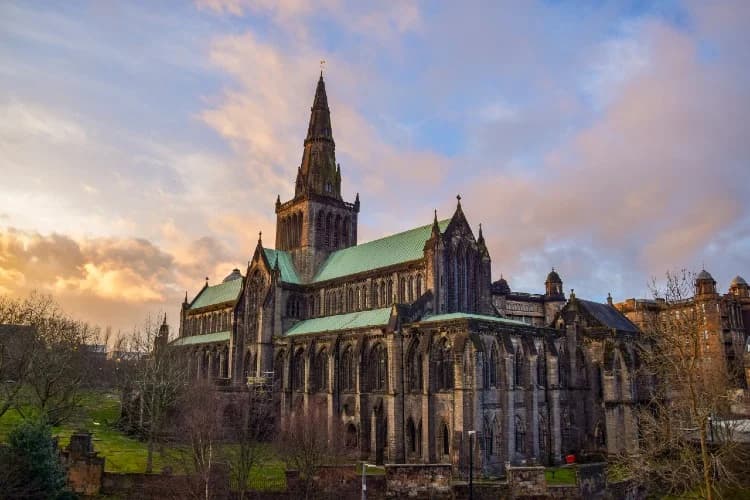 Opened by King David I in 1136, St. Mungo’s Cathedral is a beacon of the Glaswegian community and is one of its proudest pieces of historical architecture. The only Medieval cathedral to have remained intact after the Protestant Reformation in 1560, the church is named after St Mungo, the founder and patron saint of Glasgow, a 6th-century apostle said to have performed four miracles that led to the city’s formation. In the lower crypt, one can find the tomb of the saint, as well as various beautiful chapels and quiet prayer areas. Grand and imposing to look at, the cathedral is a prime example of Scottish Gothic architecture, with its ornate facade of high windows and soaring towers creating a dramatic silhouette on the city’s horizon. 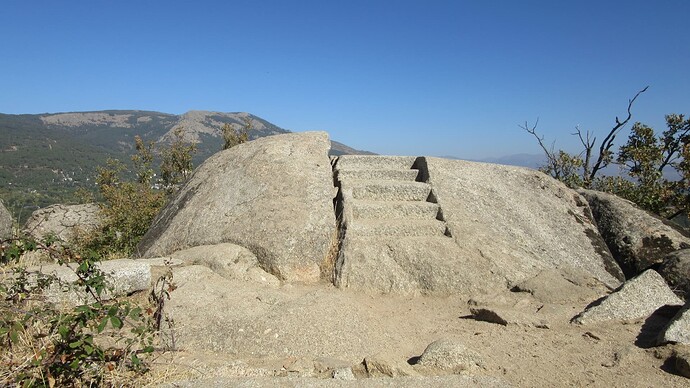 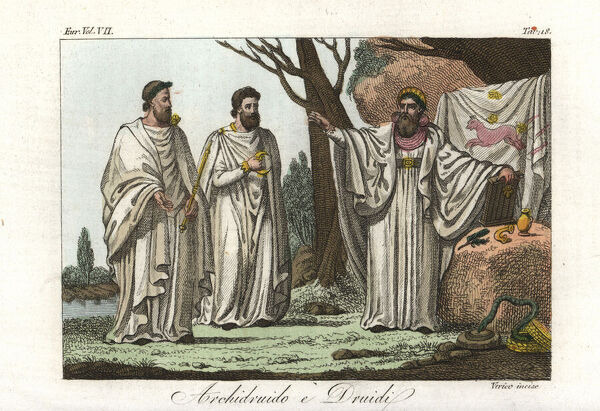 The Druid has an ability when activated, to grant a boost to resources within the influence zone. Villagers will drop off a small amount of wood alongside food when gathering from berries. Deers will naturally move towards the location of the druid. When garrisoned inside Nemetons, it will cause Deers to spawn around it. Wood, stone, and, gold also contains more resources. Druid also has the ability to heal units at the same rate as monks but does not benefit from Monk upgrades. Animal Handling ability allows units to convert Wolves and Sheep. 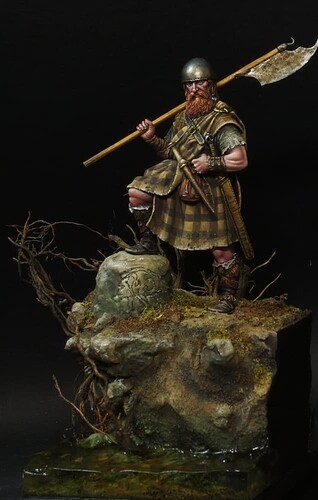 Highlanders are special light infantry that is good against heavy armored units, and are slightly more mobile than most infantry. Wielding a 2 handed weapon. 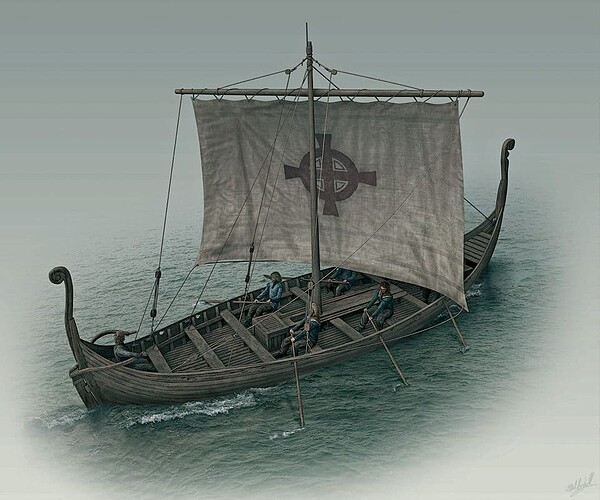 The Birlinn can also double as a small transport ship, capable of transporting up to 5 units.Also has the ability: Battle Oars that increases the speed by 15% for 3 seconds.

Initially for their playstyle, In wanted it to represent the fact that Scottish communities, despite being filled with the internal drama of succession and land ownership, were rather a tight nit and personal.

Warriors would often form groups of Teulu or Warbands in English. Who would pretty much form the core of most Scottish Armies, these groups would in peacetime spend a lot of activities together, mostly in form of Fiesting, Drinking and other forms of Male-bonding activity to keep the integrity of the Warband. So I wanted to try to have this represented in the game and be the core of the Scottish strategy. And having Druids sorta perform as a type of Prelate with a twist, but not fully replace Monks as they can not carry relics or benefit from upgrades, as I wanted to represent the importance of the change of religion in the Scottish society. Plus the druids were not specific to the Scotts, but it stayed longer in Celtic society, and never really died off.

The druid animal conversion is more a meme-thing to make them more fun. But it could be used if getting it early enough to hijack some sheep off opponents scouts for the lulz. Or using wolves as spies on the opponent. (same way you can have a sheep spy lol)

Scottish history is thicc. From the very beginning up to current times. The Scottish has a long trail of history and change. A lot of change, one starts understanding quite a lot where Game of Thrones got its inspiration. And gives you a whole different appreciation to the Simpson’s Scottish Janitor Meme.

Originally I wanted to remake the Celt’s from AoE2. But the more you start reading about the scots, the more you realize how different they were, and how much they started to evolve and change over a rather short window of time in history. Stemming from various of Celtic groups, the predominant ones became the celts migrating from Ireland in the west, and the Picts. (although there were many more groups, eventually Picts came to dominate).The Picts were the guys behind the Blue paints and tattoos, although nothing like braveheart, and speculated they got painted blue as a result of using the Woad plant to heal up scars after a battle, resulting into inadvertently getting blue tattoo’s due to its effect of burning the skin and leaving blue residue.The language, the culture, and pretty much the constant conflict against the english, eventually formed the Scottish culture we know today. And often paints them as Gentle-man Barbarian (Positive), due to their connection to the civilized english, but also ferocity in battle.The Highland Warriors became particularly distinguished during the 17th century. Very often applying shock-tactics to break formations.During the middle ages, the Scottish were adept guirilla fighters, and would often defeat the British through the use of subterfuge, whenever they themselves were united enough and not busy subterfuge among themselves. They also started to change into the Scottish identity during this period, due to the influence of Norse vikings, the English, and even some dutch through trade and french through culture of nobility at its time. And they incorporated many of these things both in their way of life as well as language and warfare. They became adept shipwrights thanks to the Norse influence, you can see this in their Birlinn ships, being a Scottish version of a Norse Longboat but with its own unique design and functions, they were very industrious with their craftsmen, often integrating and making their own version of weaponry to suit their needs. In fact, during the 17th century, after Scotland became a part of the union.Many if not most of the English fleet that later went out to conquer the world and found the British empire were made in Scotland. And its due to this and their constant resistance against English influence that the Scottish kept their own identity, despite several centuries of union up to the current day.

If you enjoyed this read, check out these other Civs:

There are so few games that feature the medieval Scottish and/or Irish in a way that really pays homage like this post does to the culture. thank you for the research you put into this.