Dear god, I finally finished the Thai, at first I thought this was going to be ezpz. As being half-Thai myself, I thought it would be an easy process to with knowledge I already knew being able to source from Thailand itself. but Thai history is surprisingly elusive in further detail. It’ll tell you about all the kings and empires and countless wars fought. But forget trying to dig into the details of technology, society, and in many ways, the way of life in that era.

But here it is! 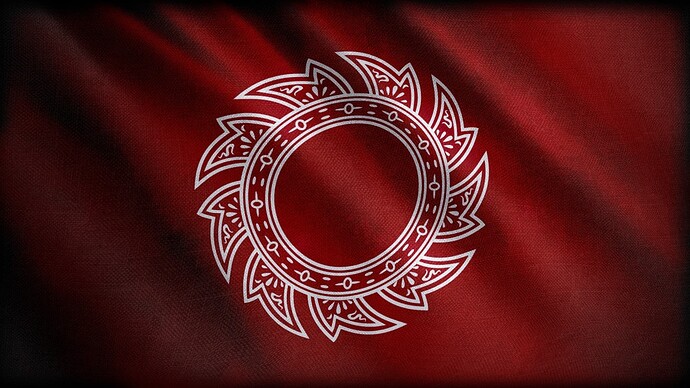 (Yes I know, good competitor to the abbasids.)

Floating Markets: Markets and Docks generates +1 gold per building within their influence sphere. Rate of this income increases depending on the Tradegoods accumulated.

Trade goods: Minimum of 1 Tradegood is generated each time a trader makes a trade, the number of trade goods generated increases depending on the trade route distance.

Additional Notes: Architecture would be something similar to the Khmer Feudal age buildings mixed with some stone buildings retaining their style. from AoE2. However, their houses are elevated wooden houses with their own distinct flair. Naval units would be the Junk-style ships, the exception being the river trade boat being more akin to a Barge. Language progression: The Tai language had a lot of development, branching out to several linguistical languages during the time of migration. But for the game, it could start off as the Chiang Saen Thai, which is the predecessor to the Sukothai language that they get during feudal, and develop more into the Ayutthaya language in Castle, before becoming an early version of the Modern Thai language in Imperial. 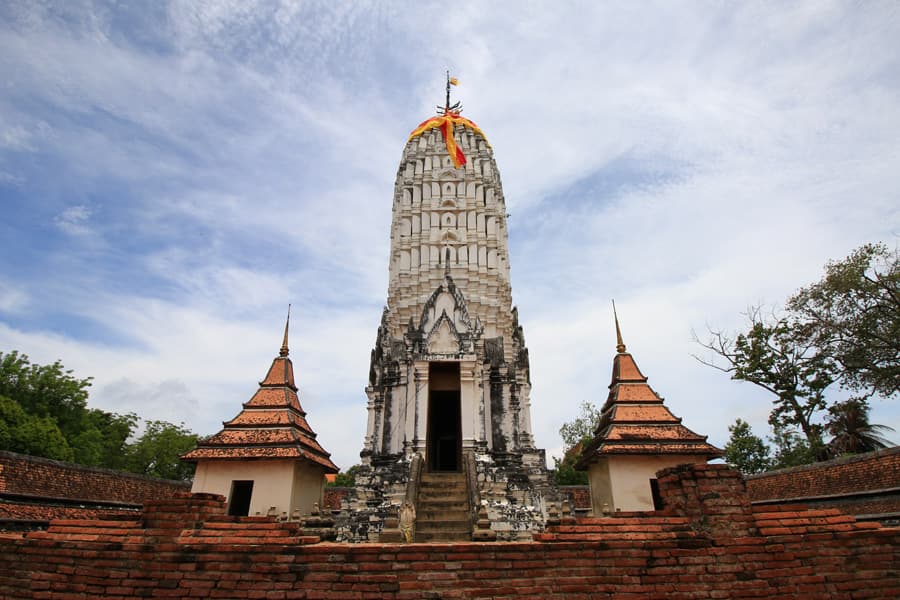 This temple was built by King Uthong who was the first monarch and founder of the Ayutthaya Kingdom. It became well known as a Krabi-Krabong (Thai Sword fighting) school from the early Ayutthaya period until the present day. Known as the Phuttaisawan Sword School.

The Bench of Public Appeals: 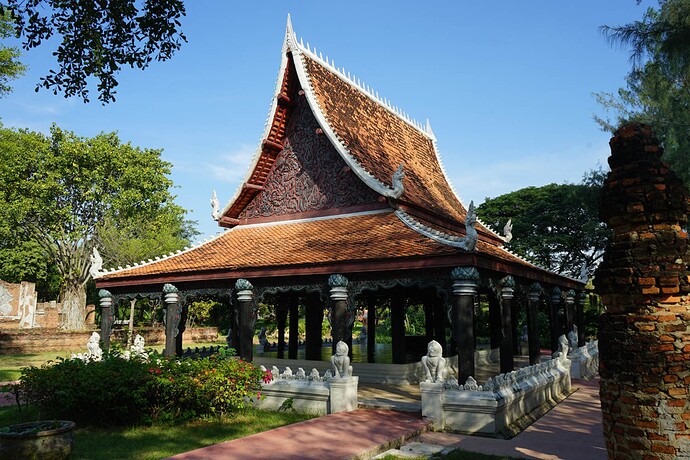 The Sukothai King known as Ram Khamahaeng the Great, also known as Pho Khun, shared a close relationship with his people. He created this, within his kingdom, upon the entrance hangs a bell, any person from the country wishing to make a formal complaint, finds himself in physical or mental distress, can request the King himself to pass immediate judgment on the matter by ringing the bell. 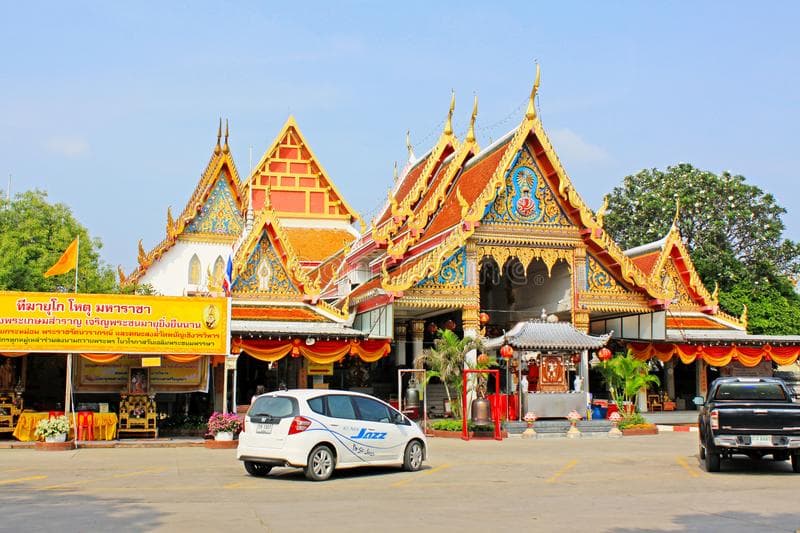 The temple houses an immense gilded 19-meter-high seated Buddha called the Luang Pho Tho. Regarded as a guardian for Mariners. It was visited by Zheng He, a Chinese Muslim eunuch admiral from Yunnan who lead the second Ming imperial voyage and bestowed gifts upon the temple in a great ceremony that included the Siamese royalty. Today remembered by the Thai-Chinese visitors who still visit the temple in his honor. 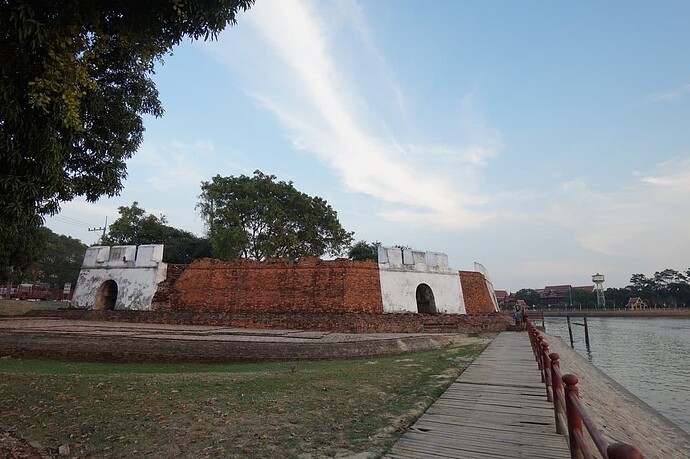 It is one of only two surviving fortresses of Ayutthaya 29 forts. The fort was considered the strongest and most important fort, hence the name Pom Phet (Diamond Fort). The area around the fort included a significant trading center where people of all nationalities resided. One person who used to live in this quarter was Thongi, a Nobleman who was the father of King Rama I. The founder of the Rattanakosin Kingdom and the first monarch of the current Chakri Dynasty, the present-day Monarchy in Thailand. 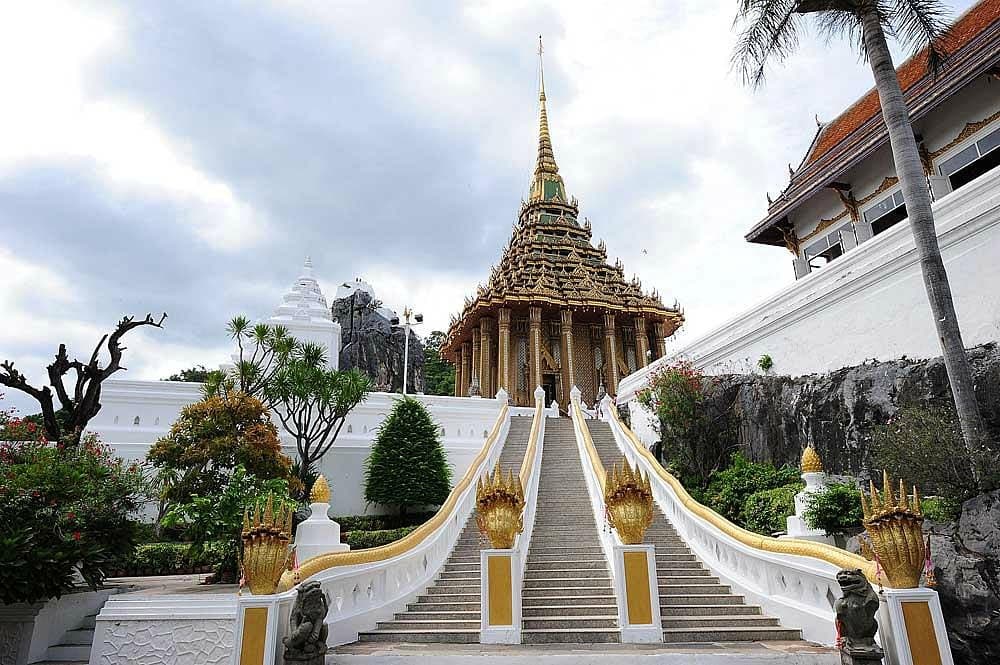 the name literally means: Temple of Buddha’s Footprint. Because it contains a natural depression believed to be the Footprint of Buddha. The king of Ayutthaya build this temple and named it after the hunter Pram bun who found a large depression in the stone resembling a huge footprint. It is believed from the Bunnoowaat Sutra, tells of the flight of the Buddha to the peak of mount Suwanbanphot and how he left his footprints. It is believed 5 footprints of the Buddha is in different places. One of them is Phra Phutthabat temple. 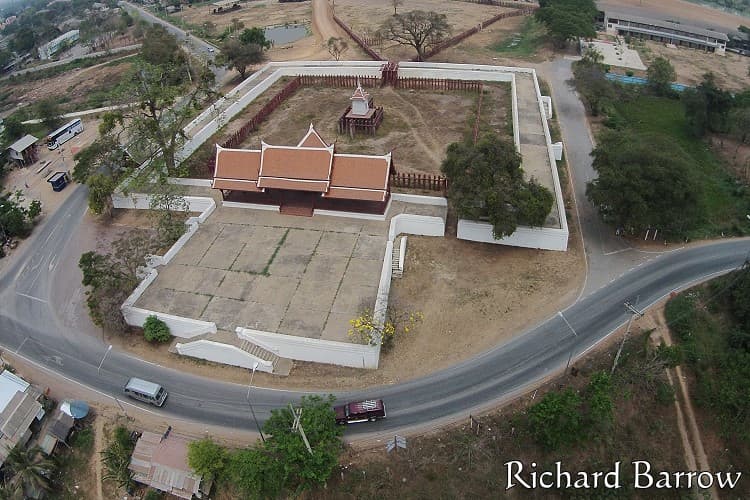 utilized as the royal seat to witness the elephant round-up. In the past, wild elephants would be trained here to become war or transport animals. In the center of the stockade there resides a Shrine said to house the elephant guardian.

Wonder: Wat Photaram: Also known as Wat Pho, is one of Bangkok’s oldest temples. It existed before Bangkok was established as the new Capital in the region. It is the temple famous for housing the reclining Buddha statue, Phra Buddhasaiyas. It was also considered the first public university in Thailand, teaching students in the fields of religion, science and literature. A school of traditional medicine and massage was established. The Thai massage taught at Wat Pho has been included in the UNESCO list of cultural heritage. 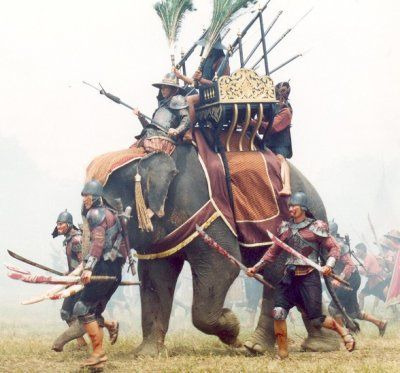 (The infantry guys around the elephant)

Jaturungkabart were the bodyguards of the Thai Elephants and would guard their legs against any attacks that might threaten the elephant. They are specially trained, form of elite soldiers. The name itself is somewhat equivalent to Protector. These units are light armor so they would be rather vulnerable against archers and units with a charge bonus. Being most effective at clearing spear mass that might threaten the royal elephant. 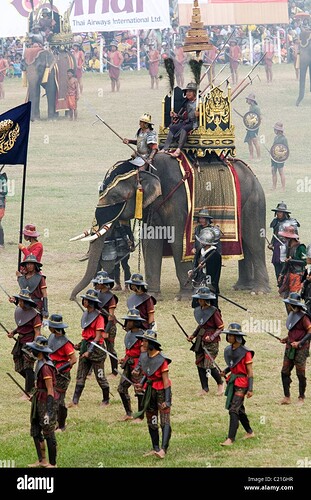 Elephants are hugely important even today in Thai society, during these times, Battles would often start with an Elephant-duel between the 2 opposing armies.The elephants used in warfare were mainly used in a supportive role, reflected by their inspiring aura. As Thai armies were mainly infantry focused. Mostly used to exploit weaknesses in the opponent army’s defenses by leading a charge 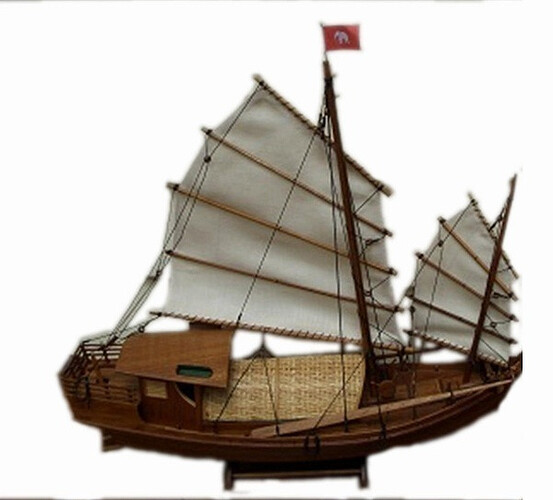 River trade boats function as faster trade ships. While they give the same trade returns as a regular land trader, but with an equal amount of secondary resources of one choosing on each individual boat. When made, they would start off with the Default: Gold and Wood. But could be switched to Gold and Food, or Gold and Stone.

I would have never guessed I would struggle so much in trying to research the topic of Medival Thailand. Anything pre-16th century was elusive as hell, and I was scouring the internet looking for any information. Ended up having to read an old book called A new historical relation of the kingdom of siam, that which was written in almost a Shakespearian style. Being my self of Thai heritage, I even had to nag my own mother to do some translation. Because trying to Romanize Thai words is a feat in itself.

While there is plenty of stories and history involving the origin, creation, wars, and eventual downfall of Thai kingdoms and empires alike. There is actually very little information on them from within. What sort of technology was common, and how were their weapons and armor made? What were they made of? Things like that were surprisingly hard to find.

Anyway, the Thai (Tai-people) are interesting as they were not originally native to South East Asia, and originated in China, sometime during the Tang Dynasty, they migrated south and settled. Due to their connection to China, their goods were quite sought after by the Chinese, which is why since their early age has always been prospering through trade, establishing trade routes along the way. Eventually coming into the lands of the Khmer and integrated themselves with the Khmer empire for a time being. The word Thai means Free. And I think it might be for a good reason, perhaps the reason why they migrated south away from the Chinese, and when they grew large enough, broke away from the Khmer empires, establishing kingdoms of their own.

Sukothai became a quickly growing kingdom, growing originally from Maritime roots into a central trade hub in the region. Thai culture has always been open to foreigners so the Thai kingdoms quickly grew to become cosmopolitan and started blending cultures. Eventually becoming very rich, until the growth of the Ayutthaya eventually took over, surprisingly, there was very little conflict between the rising Ayutthaya that eventually became the dominant power in the region, and the Sukothai, rather they formed a sort of Symbiosis, becoming known as Twin cities, both prospering from a rich and diverse trade. The kingdom of La Na in the north became the main driving force of religion, introducing Theravada Buddhism that eventually came to dominate the region. This blending with the Hindu-Indian culture of the Khmer eventually created the distinct south-east Asian Culture and Architecture we see today.

However, it was not all peace and prosperity. The Thai suffered constant invasion from the Burmese and have as many countless wars against them as the English and French had during their history. While the Burmese eventually won and manage to take the kingdom of La Na, and sack Ayutthaya destroying it completely. It never really manage to snuff out the Thai people and their identity. Every time the Thai people got raided and pillaged, they would quickly rise again as an economist might.

This is even more evident after the final Burmese destruction of Ayutthaya, the Thai people within a few years recreated the former glory of Ayutthaya further south in Bangkok which was a far more defensible position and closer to the ocean. Again establishing international trade and diplomacy. Modernizing their military and making a series of policies that eventually would lead them to be one of the few countries in Asia that never got colonized, and was well respected by the western powers, even seen as an equal at some points.

If you enjoyed this, you can check out my other Civ Concepts:
Khmer Empire
The Japanese
Korean Kingdoms

Next up: Norse (I need a break from Asia, I’m planning 4 more asian nations. Champa, Burmese, Dai Viet and Malayu)

I like all your Civilization Concepts. Thank you for your work

Thai would be a very cool Civilization.

perhaps, its hard to tell. But one thing is for sure, we will see new civilizations. because why would they not? The money opportunity is just to great to miss out.

Most likely just the Koreans and Japanese, because they could add 2 new civs that balance each other out, + campaign they are very relevant towards each other. And they are not to intertwined with the rest of the world. Mostly interracting with only each other + China that’s already a in game civ. Not to mention both being in high demand.

Hopefully you are right. I hope we will at least get some information about an upcoming DLC soon. This would be important to keep the game alive.

Now perhaps this civ should be referred to as the Siamese because it sounds better to use that civ name.

most likely yes, consider how AOE4 naming conventions goes, and they want to be more specific.
I referred to Thai here as to cover the Thai-people conside the kingdom of siam fragmented and united several times.

I really love their architecture and armor.