Try to change my mind.

The Kremlin acts as a fortified outposts, shoots an arrow with 12 damage every second and can garrison villagers. Ontop of this, it also increases the amount of wood dropped off at town centers and lumber camps around it by 20%.

Meanwhile, the Barbican of the Sun acts as an outpost, shoots a small cannonball with 25 damage but only every 3 seconds. Villagers can also be garrisoned in the Barbican. In terms of dps, this is much worse.
Even against early Knights, which have 3 armor, the Kremlin does 27 damage within 3 seconds. The Barbican is much worse.

Ontop of this, the Barbican offers no other bonus whatsoever. No economy bonus compared to the Kremlin.

The High armory lowers the cost of all siege units build in a large radius around it by 20%. Ontop of this, it contains unique upgrades, for example it allows Mangonels and Trebuchets to pack and unpack immediately. Due to the high cost of siege units, saving 20% is a big deal.

The Spirit Way Landmark lowers the cost of Dynasty units in a very small radius around it. In fact, the radius is not displayed when trying to build it, which makes it difficult to place it properly. It gives you access to previously unlocked Dynasty units, but as we established already, its not worth building Zhuge Nu in the first place since they are overpriced Archers.

The cost of Dynasty units is reduced by 30% however, to gain any benefit out of this Landmark you need to invest atleast 600 ressources into a 2nd Landmark in the first place.

There are also no unique techs for any of Chinese Dynasty units accessible in this Landmark.

The Chinese are unanimously agreed to be a low tier civ.

The Chinese are much more difficult to play yet other civs which are much easier to play have superiour stats on their units and landmarks. This is not balanced and this needs to change.

1 Like
What’s a good Chinese build order for a beginner?
Age of Empires 4 Tier LIst
How can China compete post patch?
Let's talk about China
Balancing Landmarks ideas thread
How to Fix the Kremlin
Now all the landmarks in Chinese are useless//Suggestions on the revision
Mongols are still OP
Age of Empires 4 - Landmarks Tier List
BNovus8436 November 12, 2021, 6:58pm #2

I agree that the barbican is straight up worse than the kremlin though I’d be interested to know if one has a longer range and if either are retargatable.

Comparing the high armory to the spirit way is a bit weird. definitely an apples to oranges comparison.

I would argue that chinese landmarks should be slightly worse… Since you can get both of them. And when you do, you get a dynasty bonus to make up for it. If you can get two super amazing landmarks as the chinese, while other nations only get one. Well that’s just “stonks”.

Also they’re low tier as of now. People are still figuring out how to use the official correctly. I’ve seen Aussie_Drongo play some pretty good games as chinese vs TheViper anyhow. If the oppressive French are dethroned they might actually not be that bad in the end. Although nest of bees should really be looked at.

I would argue that chinese landmarks should be slightly worse… Since you can get both of them. And when you do, you get a dynasty bonus to make up for it.

I disagree. Because the Dynasty bonuses are lost once you get a new Dynasty. And the Dynasties are so expensive you really shouldn’t invest into anything other than song dynasty with less than 100 to 120 villagers. And not just the Dynasty bonuses, you also lose access to Dynasty units and buildings! So when you go up to a different Dynasty you are left with a Landmark thats much worse than Landmarks of other civilissations. The only really good Landmark is the Clocktower.

So when you go up to a different Dynasty you are left with a Landmark thats much worse than Landmarks of other civilissations.

Yeah. But you still have two of them. Think about the Rus. If you get the Kremlin you can kiss those awesome Golden Gate trades goodbye. Plus the 20% extra wood is something you get from regular towers anyways.

Yeah. But you still have two of them. Think about the Rus. If you get the Kremlin you can kiss those awesome Golden Gate trades goodbye. Plus the 20% extra wood is something you get from regular towers anyways.

The Barbican of the Sun/Imperial Academy are kind of meh. One being a glorified outpost, and the other improving tax - but in a tiny radius (and when the tax system is hard to optimise in a useful way early on - or I’ve not managed anyway).

Fine - for 400/200, if these were both top tier, you’d rush both every game, and while Zhuge Nu are a massive question mark (and thats generous), 35% reduced villager costs is solid. (Although, as people discovered on basically day 1, spending 400/200 to unlock it, isn’t dramatically cheaper than 400/300 for another TC - and 6 vils in a minute kind of beats 4.5.) You can super-boom with 2 TCs and Song, but… yeah. That’s a lot of resources unless your opponent is just sitting in their base.

But that’s where the story basically ends. I can’t think of a scenario outside 4v4 no rush (or a stupid water map - and arguably even then), where you’d have the time and space to spend 1800, never mind 3600 resources on a second landmark in Castle or Imperial that does basically nothing on its own. If you did have such time and space, its because your opponent has messed up somewhere - and you could just go and finish them.

The argument however becomes that if China can get into late castle, they tend to do okay - so they hardly need more buffs kicking in at that point. But as a mechanic it does seem a bit stupid.

Imperial academy tax boost is actually pretty good, the area is enough that you can fit the mills for 40 farms, 12 prod buildings, clockwork tower, a blacksmith and a university all within the tax boost zone. It does only end up being 500-750 gold per min though so it’s not nearly as strong as HRE relics etc.

Fair point. I guess it would be interesting to try and map how much gold per minute it is throughout the game (both in terms of generation and effective collection).

Imperial academy tax boost is actually pretty good, the area is enough that you can fit the mills for 40 farms, 12 prod buildings, clockwork tower, a blacksmith and a university all within the tax boost zone. It does only end up being 500-750 gold per min though so it’s not nearly as strong as HRE relics etc.

Only one piece of them has to be within the zone for it to work.

I’ve done something like that while learning how to use the Chinese playing vs AI, but we are talking about doing an awful lot of planning and only building all this set up around imperial academy on late game.

Again, is really time consuming, but it can be a nice gold income for black forest.

Also, I’m not sure if pagodas also get taxes.

The point is, you have to spend much more resources to get one extra landmarks. Resources are scarce in a competitive game, and with that resources spent, you could use it on armies or other upgrades. So on paper, Chinese would be “stronk”, but no, it is not worth getting two landmarks, especially in Castle Age and Imperial Age. 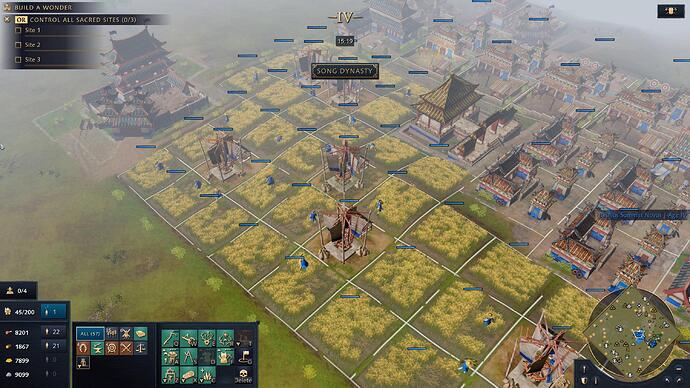 I did bad math on the farms, it’s only 35 but the rest is there.

Comparing the high armory to the spirit way is a bit weird. definitely an apples to oranges comparison.

This by itself is already better than the Spirit Way Landmark. Ontop of this, you can build as many Keeps as you want, anywhere, which means you can apply this to all your production buildings.

Spirit Way has only a small radius and will not apply to production buildings build at the front line. Because of this, I suggested it should simply make all Dynasty units cheaper regardless where they are produced. See here:

Collection of bugs and issues IV - Report a Bug

Hello, I have collected several bugs and issues with the game. Not all of them are bugs, but they need dev attention since were already in the game in the stress test and are still not fixed. List of bugs: Smart selection does not work Unit healthbars do not show when resolution scale is less than 100% Its impossible to queue select relic → deposit inside monastery for monks. Its only possible to select relic → walk monk next to monastery Its impossible to queue gather deer carcass → drop it …

Spirit Way is easily the worst Landmark in the entire game. The Great Wall Gate isn’t much better either. Its supposed to be an economy Landmark, yet it does nothing unless you invest into a 2nd Dynasty. And the cheapest unit unlocked for 600 ressources isn’t even a very good unit.

Zhuge Nu are outranged by Archers and Crosswbowmen and with Knights running rampant in Age 2 you can’t use them against 2 civs. They are also worthless against Man At arms. As soon as your opponent gets Age 3 you must stop producing them because they suck vs armored units.

I don’t disagree that spirit way is a weak landmark, but I don’t think it makes sense to look at every reason it is bad and none of the reasons it is good. Spirit way is good if: you plan to make ~100 dynasty units. in this situation you get imperial age for free OR 10% hp, increased relic income and grenadier access for free. Not bad, especially if you compare it to other imperial age landmarks: A tanky keep, A keep with more damage, A keep with more range, max 750 food/min, A fast working, cheap TC. These all are situationally useful but I wouldn’t put them as inherently more powerful than spirit way.

China needs buffs but their imperial age landmarks aren’t the thing to buff. They are weak because they are hard to play, have difficulty controlling the pace of the game, bait players into booming with low military, and lack strong options for feudal and castle age units.

Im sure im not optimized right… but i dont do the Song Dynasty till after i reach castle i think? Mostly cause i rush to castle… and the tax bonus structure layout doesnt come for me till im starting castle and building around it… then i usually only stay in song long enough to build its one unique building then the graneries and then the last one… i often skip the second dynasty just cause its village though cheap issnt always good timing for my wood consumption

I actuall like barbican… as a cheap early castle”” its great for keeping early rushs and scouts out. Placed well it can protect early villager raids
If i remember right chin is one of the 2 civs that have a feudal defensive structure
i can see what they tried to do to balance chinese and i do believe played right they arent horrible… but they do need a couple tweeks just like all them civs do…

Wait, do relics get double the benefit if monastery is in the tax zone? I do know that Pagodas generate 10 gold a min, so not sure it worth it for the 20 gold a min in the zone, unless those relic benefits are doubled. I will have to test.

I never got to get to this point in 1vs1

And even in team game, this ask way too mutch booming =)