The Indian civilization is very poorly designed. The unique features of an Indian army world be the excess amount of elephants. Even the Persian elephants are actually from India but still India does not get its own usable elephant unit. Like you gave the steppe lancer to Mongols please consider giving some elephants in stable to Indians as well.

Now that Mongols recieved Steppe Lancer, I think it is about time Indians should recieve Battle Elephant. I would like to breakdown some point before I actually talk about Indians Battle Elephant. Civ design in AoE2 should always be revolve around historical accuracy vs game balance. Because too much historical accurate will make the game unbalance and bad from game design perspective. Too much game balance will bring bad design decisions. Every civs in AoE2 are following one playstyle. Just s…

According to you which civ do the Imperial Camels fit better thematically? poll Ofcourse the game will need rebalancing accordingly. My idea is to move the imperial camel from indians to saracens and give indians, knight line or battle elephant line while making saracens the ultimate camel civ.

According Hera’s video about Tier list of unique units, I think the same, elephant archer is the worst unique unit, is true that have a high HP, but have many counters and the range and attack or even mobility is very bad, any suggestion?

Imperial Camels - Why not make them generally available? II - Discussion

poll One of the biggest perks of Age of Empires 2 DE has been that none of the nations or techs are hidden behind a separate paywall of any sort. That means, Steppe Archers can be available to Mongols. That might mean that Battel Elephants might be available to Indians one day. It might also mean that we don’t have to limit the Imperial Camels to just the Indians. When The Conquerers came out, two new upgrades for current units became available to most of the nations (I’m so sorry Turks). T…

So I recently made a post/ topic idk what its said , recently which was about the elephant archers and how crappy they are and now with Flaming Camels they have simply become too situational not even that just terrible and how bad they so I thought of some crazy Ideas that could Make them better this led to a lot of people coming out with even more good new Ideas on how to improve and I thought to put some of them here So here are some of these Ideas and Also If like to add more it would be g…

So like a lot of other AoE2 players, I feel like the Indian civ in the game doesn't capture its real world counterpart very well, perhaps more so than any other civ in the game. The developers seemed to build the entire civ around around one...

I keep reading how India is far too broad as a faction and should be divided into several fractions (to be able to present India fairly). Because I know almost nothing about India (Except that they like elephants), what factions could they be?

A brahmin special unit from the monestery, a monk mounted on an elephant. Cannot convert units, but can heal units and also can be used similiar to a battle elephant. They already have the voice acting from Age of Empires 3, they would just need to...

can someone tell me why india specializes in Camels

I really want to use them but it seems like most of their bonuses are map specific or late game. The elephant archer is way too slow and it's rate of fire is low as well so it kind of sucks as a UU. The only saving grace is the Imperial Camel.

r/aoe2 - Why do Elephant Archers exist. 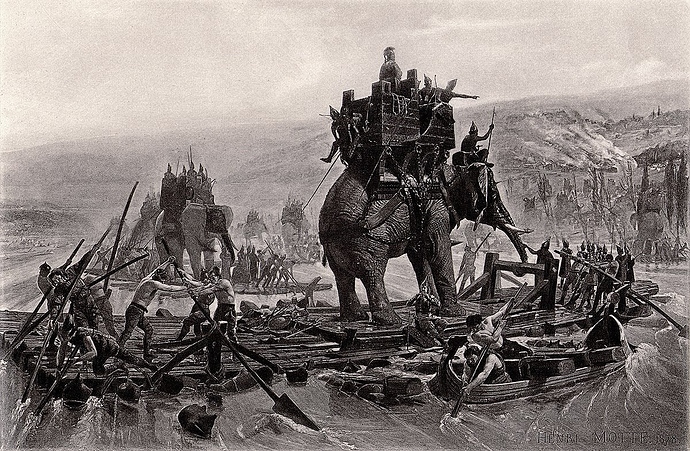 r/aoe2 - Now that the Mongols got steppe lancers, can the Indians get battle...

Why must the Indians be denied Battle Elephants? We could work on balancing, but they should get them being their Major theme II - Discussion

Simple Question here, I would like to know why the Indians have not been given a melee elephant unit despite historical records showing the Indians having used the most Elephants(with Mahouts) out of any civilizations for combat. Let’s be honest here, the Indians are one of the most poorly designed civs in the game (like the portugese). I understand that Historical Accuracy is not the only priority in Civ design, but unlike Chinese Gunpowder which was not commonly used as the Hand Cannon there …

Elephant archers are probably the most useless UU in the game - nobody ever makes it (unless to troll). Here is a unique idea that might make them viable and interesting: What if elephant archers could cause a small melee splash damage to nearby units, in addition to pierce damage to targeted units? This will prevent them from being easily overwhelmed by halbs. This will be a very interesting UU behavior that will make the game more fun.

Ive read many many posts on this major issue since many years, and decided to finally speak up. I cant beleive the devs havent fixed this massively unusable UU already. It has basically remained untweaked since african kingdoms (and look at Hera’s latest video on UU tiers). They buffed the Tarkans, Axemen, Berserks, War Wagons, Battle eles, Condos, Konniks, Turtles etc many times (regardless of if the civ was strong or not) AND gave them actual competitive viability but never even showed inter…

There’s a lot of discontent about how little representation the East Asian factions got in aoe2. Also Indian faction is a very odd looking faction as well. If in future there are dlc civs and I do believe there should be; I have two suggestions that can lessen this problem. India as a camel civ doesn’t make much sense. The Indian faction that we got only represent Rajput. However at this point it’s pointless to argue about this. After all Italian faction only represent Genoa if we think like th…


Indians in AoE2 are having one of the worst civilization designs as is evident from all these threads. Devs please do something…
9 Likes
Battle Elephants for the Indians
I think Indians should have access to battle elephants
Juggernaut8704 April 17, 2020, 12:38am #2

Summary of all these threads started by so many different people is the same. India was not a united entity in medieval period. It is a huge number of culture group classified as one civilization in the game. Even if you do so it makes very little sense to make them so heavily camel oriented while making their elephants of little to no use (which is just unacceptible). Some people are asking to buff/change elephant archer, yet some others are asking to give them war elephants or battle elephants. Yet some other people are suggesting to create new Indian Civs and non of the Civ designs they are proposing is camel heavy. They either use Infantry, Archer or Cavalry along with the Elephants.

There is no question that EAs need buffs, it’s only a matter of how. They’re a very confused unit. Why have an archer UU when they already have more powerful hand cannoneers?

Buff their damage and they overlap too much. Buff their range and they stop being meat shields automatically. Buff their health, I guess? It could work, but they’d still be generally inferior to equal resources in HCs, because they rely so much on critical mass to survive, rather than on large health pools.

That’s why I want them to have a monk on their back that automatically heals units nearby them. Make them offer something other units dont, and then you’d want a few scattered through your army no matter what.

Until the day chinese get bombard cannons, hand cannon and siege engineers, Indians theme can also stay as it is.

I use EA as indians in black forest team games, late game, and dont feel like they need a buff, they are really strong.

Give the Elephant Archers more range maybe? After all being on top of Elephant would give more range and LOS.

Trouble is, the whole reason they’ve got shorter range is so they automatically take the front position and can tank for the other archers. Give them more range and you’d just end up needing to manually micro them to the front, because high health is pointless if it’s hidden behind all your other units anyway.

Just make attack rate in line with archers. Or closer to them anyway.

They’re in a weird place is the thing. They’re clearly meant to be a tank for other archers, rather than the main body of your force. But archers tank for themselves by reaching critical mass, so that niche isn’t really necessary. As long as they’ve got less dps than other archers, they’ll not get used, but if they have more, they’ll only be used in the endgame in the exact same role as War Elephants, to achieve a massive population efficiency advantage.

As long as they’re in direct competition with archers, they’re gonna be super-niche at best.

That’s why I think they need to be buffed laterally, to give them something else they can do while fulfilling their primary purpose. Like how Mangudai have their siege bonus. They kinda have that with their building damage, but if that’s to be their role, it needs to be quite a bit stronger. But it’s why I think giving them healing for nearby units would be cool, it would make them useful in small numbers combined with just about anything.

But it doesn’t have to be that. Just anything that sets them apart from other archers.

Elephant archers in history were used like tanks to smash the enemy ranks and the archers on top helped soften the enemy for the infantry to proceed in and finish up. How could this be replicated? Could they have some form of melee then?

Could they have some form of melee then?

No. A unit can only have one form of attack in this engine.

How could this be replicated?

It wont be replicated. Simple. >:D

No. A unit can only have one form of attack in this engine.

According to ES devs, it’s actually easy to do. However, they decided not to implement melee/ranged hybrids because it was deemed too complex. They explained it with the example of samurai: they were supposed to be such hybrids units but then you would have situations where you task them to defend ur castle vs trebs, go do something… and then come back and see your castle is ded and your army is just shooting arrows at the treb.

Other than that, some of your claims aren’t so great…

He is right in one thing, Berbers having Genitours was a huge mistake. the Genitours were anti-Berber units.

Well, they didn’t tell him that you can have Spanish and Portuguese genitours, which is better than just Berbers ones.

But you cannot, unless you Berbers on your Team.

I suppose you could theoretically do some sort of debuff on things they shoot. Reduced damage or armor or speed or something. That might be a bit too complicated and weird though.

Would definitely be hilarious though. Going against a faster enemy only to shoot them, slow them down, and obliterate them? Good times.

Trouble is, that puts the burden of knowledge on the enemy. I think it would be better for them to help their allies, so the effort required is placed more on the indian player.

It’d be great if people with no coding knowledge would stop making bizarre claims about what the engine can and cannot do, though.