Maroons as a minor faction

Maroons would be a very efficient to implement minor faction that could fit an extremely broad set of maps. They could also help to fix the most inaccurate placements of minor tribes

They would also fit into a variety of new maps like Mosquito Coast, Mascarenes, Maracaibo, or Liberia 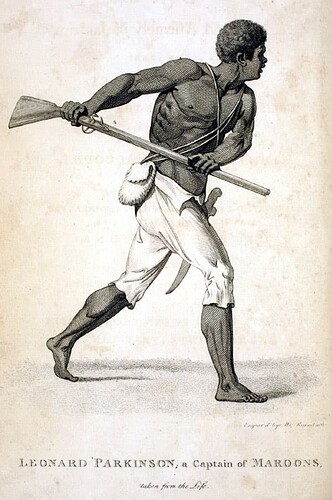 Maroons were communities of escaped slaves who hid in the forest and who would in wartime use guerilla tactics to raid the plantations they escaped from.

To capture this history, Maroon Guerillas should be stealthy skirmishers with decent siege. They could have slightly less range than skirmishers to encourage using their stealth ability to close the gap. Possibly a high attack with a variable attack rate like Oromos (it would be interesting to combine this mechanic with stealth that lets you get to the optimal range). Siege ability somewhere between a skirmisher and musketeer (to be further boosted by a tech).

Creole Tongues - Technologies are 5% cheaper and 5% faster to research

They are a local Jesuit-style population. They are not properly native, but they settled in the area.

I like the spirit of the suggestion. I think I disagree with the techs and the unit type; there are already skirmishers natives for Americas, however they could really use a musketeer type unit.

As I said on reddit, I think they could have a hero unit, like Berbers and Akans.

I made another suggestion for Muisca that would have a musketeer type unit.

As for Maroons, I don’t think a musketeer type would fit a fugitive/guerilla unit. Musketeers are line infantry that fight pitched battles and tank enemy fire. Skirms are more of a fragile hit and run type unit. They’re also weak to cavalry which seems like a unit that would be effective at running down escaped slaves. Lastly, musketeers are already decent at siege so my Retribution tech would be too strong if it applied to all musketeer type units (I’m assuming that would be the tech you have an issue with).

I read it now and then but I don’t comment there much.

Thank you for referring me to your other proposition as well. I think that it makes sense in the context of those two ideas together, however if devs were to pick just one, I really prefer they go for the musk-type unit first that you suggested.

I like the idea, the only inconvenience I see is how do europeans will work with them considering they are scaping…from them
Since they work more with natives this could be made for them;

I believe the British had Maroon legions fight for them. There’s always room to take sides in conflicts between the European powers.

I like the idea, the only inconvenience I see is how do europeans will work with them considering they are scaping…from them

Let’s just suppose that by allying with them, they will fight on your side in exchange for their freedom.
Something like that could be said in the lore.

Capoeira is another tradition that could be represented by a tech for them.

I’d love to see Maroons as a minor faction.

They could have a ‘leader’ / Explorer unit too - Nanny of the Maroons (the leader of the Windward Maroons). She could be armed with a musket and maybe could have a stealth area of effect ability to help make her Maroons ready themselves for some guerilla warfare.

For something a little different they could also get a scout unit - Maroon Lookout who has a very large line of sight when stationary (like AoM Oracles). They would also have an Abeng - a cow horn, which could give any friendly unit (or maybe just Maroon) a speed boost when in the Lookout’s vision.

Here in Brazil we have Zumbi dos Palmares (Zumbi - Wikipedia), who is pretty famous as a liberator.

There could maybe be a hero unit based on him (similar to the Tufohen and Sultan).

A lookout or sentry would make sense but I don’t think giving them a hero unit is a good idea. My goal was to have them generic enough to work on maps ranging from the Carolinas to Brazil and giving them a specific hero would clash with that. It’s also not very consistent, the Apache don’t train a Geronimo and Cree don’t get a Poundmaker. If there are any leaders, they should be part of the Haitian revolution, and Maroon units could be a major part of that revolt option.

A hero unit doesn’t have to represent any specific person. Explorers and the likes don’t.

But what language would they speak?

I think Haitian Creole would make the most sense.

Why not an African language? I’d suggest Bantu or Yoruba.

Why not an African language?

Because the Maroons had their own languages such as the Maroon Spirit Language. Each region had their own creole that mixed African, European, and native languages. The reason I’d prefer Haitian Creole is because I think Maroons should be available to the Haitian revolution.

Also, Bantu isn’t one language, there are hundreds of Bantu languages.

Maroons should be available to the Haitian revolution.

They don’t have to speak the same language, some mercs you can get through revs speak different languages from the usual ones. And Haitian Creole wouldn’t make sense for South America.

No language is going to be perfect since other than revolution variants, languages for native units are global. They could maybe go for a Spanish Creole like Palenquero or Portuguese one like Papiamento instead. Although French and English were present in the Guianas.