Saves/Replays menu can sometimes take a lot of time to load, and sometimes displays wrong civs (will make bug report if no one did yet)

This seems to happen on my Xbox version much more than my Steam version of the game.

For me spectating doesn’t work anymore. Speced a ranked 3v3 and it always freezes and then quits out of the game after a few seconds. First time 15 min in, second time 20 seconds in. Multiple times it’s happened now, I just don’t seem to be able to spec anymore…

Korean’s Turtle Ships dmg output is bugged. Does 1 dmg to buildings and a seemingly random amount of dmg to units between 1 and 50. Bugs been reported, but not on this list yet.

I fixed my freezing problem after 2 month by myself. Just delete all files of my %temp% folder and it works.
Thx for ur help :x

DESCRIBE THE ISSUE IN DETAIL (below). LIMIT TO ONE BUG PER THREAD. The Koreans unique unique, the Turtle Ship, sometimes deals 1 dmg, or 10, or 25, or any number between 1 and 50 instead of what it’s supposed to, and deals 1 damag…

These details are CRITICAL; DO NOT skip them or your issue may not be reviewed. GAME BUILD #: New DLC Patch, but bug was in game ever since DE released, i teseted this before around a year ago and had hopped the new patches gunpoweder fix would have helped GAME PLATFORM: Steam OPERATING SYSTEM: Windows 10

DESCRIBE THE ISSUE IN DETAIL (below). LIMIT TO ONE BUG PER THREAD. The Organ gun shots 5 bu…

My game keeps crashing after today’s hotfix (hotfix-44834) it crashes in campaigns or playing just 1v1 vs ai or playing ranked games. tried everything, playing without visual mods, activating vsync, uninstalling and reinstalling the game, and anything works. i simply cannot play aoe anymore

The decay animations for the Bui Bi hero, Imam and Meso american monk are gone since last update

Shame on you devs. Don’t ever claim to fix things that you didn’t truly fix. Or if you actually have fixed it and broken it again… Write your unit tests man

ISSUE EXPERIENCED Read the title and watch the video. 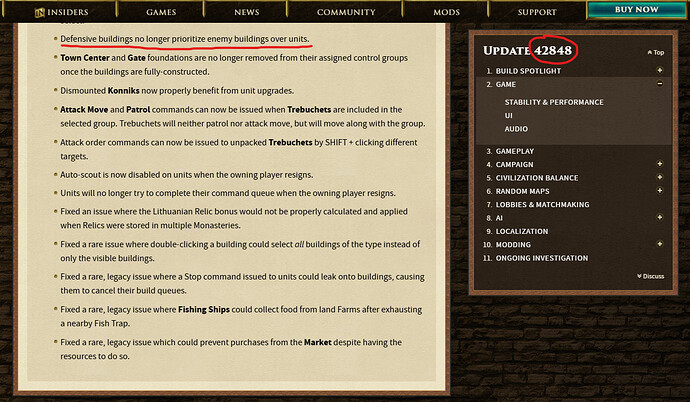 Another bug that you dont listed yet who happen to me really often on ranked multiplayer, is when i use the bell on my town center for garrisonned villager when i release them with the “back to work” button they just all circle the town center and dont go back to work so i have to replace every villager manually on each task who is really really annoying specially when you have 120+ villager and you have to deal with ennemy at same time. This bug happen randomly since few month alrdy

Selecting units while holding the ALT key doesn’t work. If you press the alt key you ignore buildings when attacking, so it happens that I have it pressed when selecting units, but since the Jan patch it does not select the units anymore.

I’m having issues with sound, never had them before but this new update is causing it:
90% of the time, units fighting will make sounds for the first bit of the engagement, after that there will just be silence, there is sound for the rest of the game (if i hotkey town center etc, it makes the usual noise)
It only goes quiet where the fighting is happening, i’ve tried several restarts, all settings are correct too.

Selecting units while holding the ALT key doesn’t work. If you press the alt key you ignore buildings when attacking, so it happens that I have it pressed when selecting units, but since the Jan patch it does not select the units anymore.

Thats how the game is supposed to work

If you hold down ALT, you are only able to select vills

Game crashes since January DLC patch and hotfixes, happens at beginning of game usually seconds to 10 minutes into the game. Tried reinstall, updated drivers, different drives, with and without DLC packs, still the same result. I have steam version if that counts for anything.
edit: lol rip Im newb

How about tracking this bug that has existed since launch?

Is anyone else having the AI Team keep resigning when playing deathmatch. I’ve had them resign 4 times without a single battle. Have had it set to both conquest and last man standing and doesnt make any difference.

[BUG] Font doesn't look very good, even at big UI (125%). And pixel artifacts throughout the game II - Report a Bug

ISSUE EXPERIENCED Lots of pixel artifacts in the font, seen in many places of the game (UI panels, chat window, game menus, diplomacy window, replay control panel, etc.) Makes some words look muddy, fuzzy, blurry, and, generally, harder to read… sometimes with pixels from one letter seeping into adjacent letters, and vice versa. The font does not look crisp and sharp like…

All campaign progress and saved games are away! II - Report a Bug

Game Version: Build: 34397 Platform: Microsoft Store Issue: Yesterday I wanted to start AoE 2: DE to play some campaign and saw that all my campaign progress and saved games are away and not available anymore. Can anyone help me with this? Sorry for my bad english, I’m from Germany… Reproduction Steps: Start the game and simply play some campaign like Turks or anything else Start the game some day new and the campaign progress and saves disappear

File 'filename.smx' uses an invalid filetype; some sprites will not display. This is likely caused by a mod

File xxx.smx uses an invalid filetype; some sprites will not display. This is likely caused by a mod II - Report a Bug

Getting the above error when running in UHD – installed it on a different PC with same results. Game missing assests - buildings, characters, etc. Brand new install and no mods installed. Searched and apparently I’m the only one experiencing this – on two different PCs? Any suggestions?

FREQUENCY OF ISSUE 100% of the time

1 Like
File xxx.smx uses an invalid filetype; some sprites will not display. This is likely caused by a mod
ThatGuyisok February 1, 2021, 2:02pm #87

Currently going through support and gave more in-depth details as of what was going on in-game
This time it happened in the Dark Age, Civilizations being Spanish(me) .Vs. Japanese(AI). I had 12 chopping wood, 6 on food( 2 on berries with 4 farms and 5th farm being seeded after finishing elephant lure harvest) with a scout running through the enemy base. It appears that two villagers were seeding a farm at the same time bottom right of Town Center while the farm is actively being farmed unsure if that would cause a problem. I was moused over the Idled villager after it completed building a house(after being housed) as the client became non-responsive, unsure why the luring tool-tip came up. 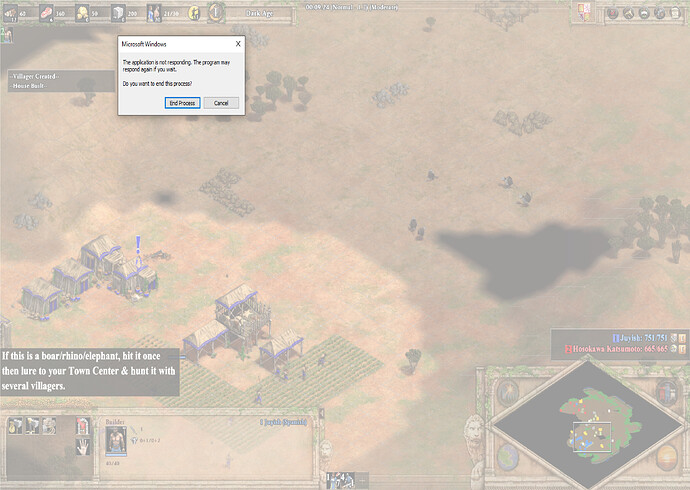