Well remember that it is a German civilization,not a united nation as such,that is,it would represent the Holy Roman Empire and on the longbows,the British continued to use them until the English civil war in 1642,for example the royalist army owned thousands of these;instead the parliamentary army had thousands of muskets…

Native Allies All civs should have a homecity card that grants them an alliance with a minor ally regardless of map, not just the United States and the Inca. The options should be based on what native mercenaries the civ can ship from the homecity, such as Cherokee for the British. Some should also get new options for shipping native mercs (and thus embassy allies). For example, the Spanish should be able to ship Zapotec and Mapuche allies, not just Maya allies, and the Ottomans should receive…

[Laurentia][Ohio][Oregon] The great rivers of North America were the arteries of trade linking to the resources of the interior. These regions could be represented by new maps to expand the concept of water trade routes beyond just sailing ships off the coasts of Africa. The Voyageurs were the facilitators of this trade, and the appearance of these routes should reflect that. The routes should progress as follows: A Small Canoe with only one or two trappers/natives [image] A Large Dugout …

These cards could be modifications of some cards or they could be cards that would be present in other civilizations, but that would be new for some. Basically they would be “homologous” (so to speak). 1. Shipment of fishing boats for civilizations that do not have them: Europeans, Africans, Americans, Incas and Indians should have them. A shipment of fishing boats at age 1 for a more viable opening of the sea. The Asians already have this and also the pre-Columbian civilizations of TWC. (E…

Argument about mechanics: I have thought a lot about this matter, because the fur market always seemed like a good idea, but very poorly implemented. I think most of us agree that the mine that magically disappears over time looks kind of ridiculous. But to be frank, it is difficult to come up with an idea that would make mines have a purpose for civilizations that did not practice mining or metallurgy. That is why it must be seen from a new perspective that somehow indirectly links these civ…

South America needs more natives. Even Central America and the Caribbean could have more natives such as the Tainos.

Currently, we have the Mapuche and the Tupi as South American representation in terms of minor civs. The Muisca from Colombia, Quilmes from Argentina, and Guarani from Paraguay would all be great additions. On a separate but similar note, the Thule Inuit should also be in the game. Thoughts? Any more suggestions? Disagreements maybe?

New cards for the oldest civilizations (European, pre-Columbian and Asian).

I think we can assume that this is being fulfilled. I like the new British unit and their new warship. I would like other civilizations to receive some kind of flagship in the future.

I think it would be relatively easy to polish the minor factions one by one, just as it is being done with the civilizations. Enough research has already been done to update them properly: [Minor Natives topic] Post here your ideas for every single minor natives so the devs can look at.

I don’t think it’s too difficult. Just some code alterations and an image that represents that improvement/technology.

We have also ordered some new units, but I don’t think it will be very difficult. After all they are adding skins to the heroes and sometimes new units.

By the end of the game the strelet of the Russians could cost coins instead of wood once the improvement of ‘imperial strelet’ is done. They use firearms so that would also make more sense. In fact I think they could cost coins+food from the beginning, but I guess the cost in wood is for balance or something like that.

Mounted Nizam-I Cedit (Napoleon: Total War) | Total War Wiki | Fandom
Ottomans could also have a skirmish unit in the barracks, and unlockable gunpowder cavalry with cards replacing the cavalry archer and making it available in the fort. (All this for game end). They also need an infinite native ally, just like the Germans.

Prologue: Below I will present a compilation of proposals related to the natives, minor factions or whatever you want to call it. Some proposals made by me, others made by other people, and others in which we probably converge. The goal is to improve the viability of using natives in general, regardless of whether some civilizations like the Africans and Inca civilizations for example already benefit from alliances better than average. Let’s start with the most basic: TP in native settlem…

Malay Location: Malaysia, Borneo, Indonesia, Siam, Philippines, Moluccas [Moluccas] Unique Unit: Lantaka or Lela Many different types of cannons were used across the Malay Archipelago and these could remedy the current lack of native artillery. Either a Lantaka or Lela cannon would be most appropriate. Lantaka Lantaka were muzzle loading swivel guns used mainly from ships. They could have stats and functionality similar to Leather Cannons with additional anti-ship multipliers and be a…

They are doing such renewal, starting for the British
Good, the legacy civs are drawing more of my attention now.

I suppose that when each civilization ends up receiving their respective facelift, they will focus on the rest of the aspects such as minor factions that would actually be much easier to polish compared to civilizations.

Replace minor tribes that are in the wrong location III - Discussion 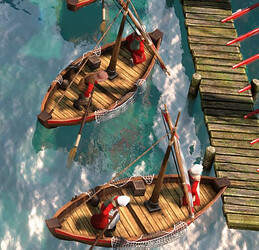 I also hope that the way they obtain coins from the Lakota and Jaudenosaunese mines is resolved once and for all. There are already enough proposals in this regard.

I would like you to review the British Cattle as it did not receive any revisions in the recent British rework. They can fatten up and harvest cattle faster than many factions, but it requires a lot of cards and some context, like treaty or maps that have herding cattle.

I think that the best way to update old content related to America and especially South America is that it is accompanied by paid DLC. But how could it be…?, Mapuches as small DLC (?).

With this new expansion it has been shown that the game is improving more than we imagined, so it is easy to assume that new natives for South America, new maps and naval trade routes could be present eventually.