There is no clear reason for this situation to happen. 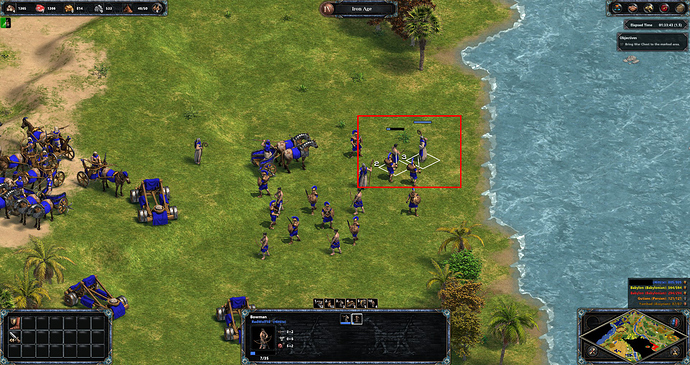 I just had this bug too, and added it to my list. I didn’t know they didn’t heal converted units.

This issue still persists after update 36211.

I just had this bug

My priest was next to one of my own Catapults. It seems that this bug happens no matter how close priests are too friendly units.

Thank you for the report! We are tracking this internally for review and discussion. We’ll let you know if we make any changes to improve the behavior of priest units!

I’m glad to finally receive an answer from a Dev, after so many posts complaining and suggesting improvements for this game lol. Thanks for your attention! I really appreciate that.

Please, take a moment to look at these other bugs I’ve noticed:

I love the first Age of Empires as much as the second one. Despite the second being the most popular, I, and many other players, believe the DE version of the first game have great potential yet to be explored, and would love to see fresh content and improvements coming for it. In comparison with the attention the Age of Empires II DE has since its release, the first one looks so abandoned

The community would sincerely be appreciative if the Dev team showed some attention to their suggestions:

If you guys don’t intend to release any big content and improvement patches for this game any time soon, so please clarify that for us. Don’t leave the community in the dark.

Again, thanks for your attention!

Great post man! Dont need to rush or make a big update, we know most of the atention is given to age 2 de. Id love to see even some small updates from time to time.

You don’t need to rush or make a big update, we know most of the attention is given to Age 2 DE. I’d love to see even some small updates from time to time.

I agree! Even small ones would be really appreciated.

Build 38862 update:
This is still an issue. I had a wounded villager next to my priest, and yet he didn’t start healing his fellow in need. I had to manually command him to do so.

At this point, the only single thing I expect from the devs is the correction of every single bug in this game on the next patch. Nothing less. Additional content is in the reign of dreams now.

At this point, the only thing I expect from the devs is the correction of every single bug in this game on the next patch. Nothing else. The addition of new content is on the realm of dreams for now.

I hope the majority of these bugs to get corrected on the next update! The currently one was the devs signalizing us that they are aware of the issues and working on them, at last. I trust a lot more in their work now!

Unusual but still exists. Would love a fix for this small bug.

For more is necessary to travel to another dimension. A dimension where things that have brought other people much joy and attachement among themselves are treated with the respect they deserve.

Yesterday I felt the urge to, once again, post a comment on this thread, as I had some badly wounded hoplites during the Glory of Greece campaign, with not one but two priests next to them, without doing anything. Had to manually make those old men heal my infantry in order to proceed with the current mission